Creative Labs had a few new products coming this year and most were centered around their Super X-Fi technology. If you don't know what that is, here's the write up I did last year and how incredible the demo was.

This year, I was treated to a similar demo with different clips to start out my meeting. The Super X-Fi tech is still as impressive as ever making audio sound expansive and immersive. That tech is coming to a gaming headset and a new Dolby Atmos sound bar.

For the gaming headset with the Creative SFXI Gamer, you'll get a closed back headset featuring a detachable mic with a pop filter on the end. Each ear cup has RGB lighting for those that want to colorize their gaming experience. 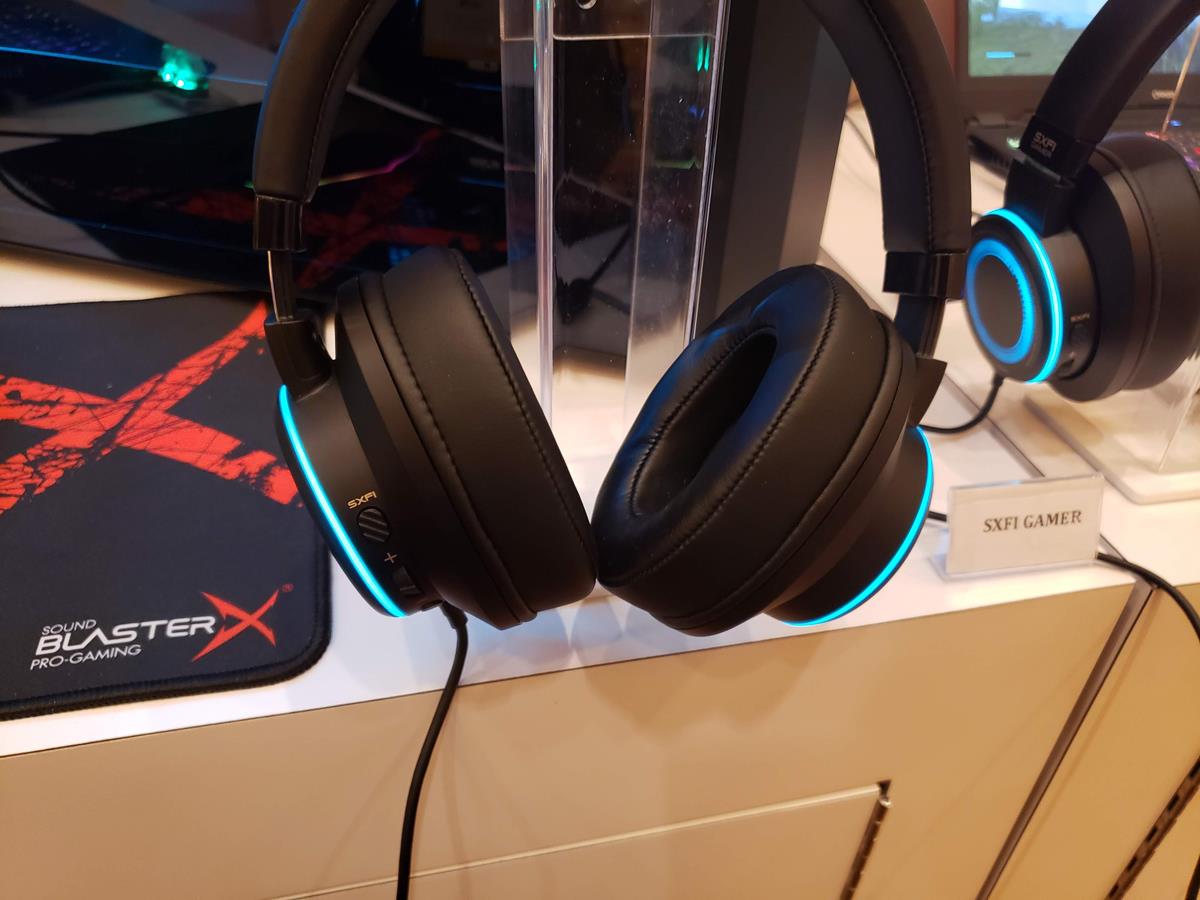 A Super Xfi button sits above the volume dial on the rear of the left ear cup that allows you to enable or disable the feature. The ear cups are easily removable with a quick twist and replaceable so when they wear out, you can grab some new ones from Creative Labs to replace them.

There wasn't much to talk to yet in terms of specs and it was making its first appearance here at the show. But, they sounded really good and the Super X-Fi tech built in really delivered on enhancing the sound making it seem more rich and expansive.  We'll get more info later this year, but if the tailored gaming profile is anything like their movies and music profiles I experienced in their demo room, then you're going to have one great headset to game with. 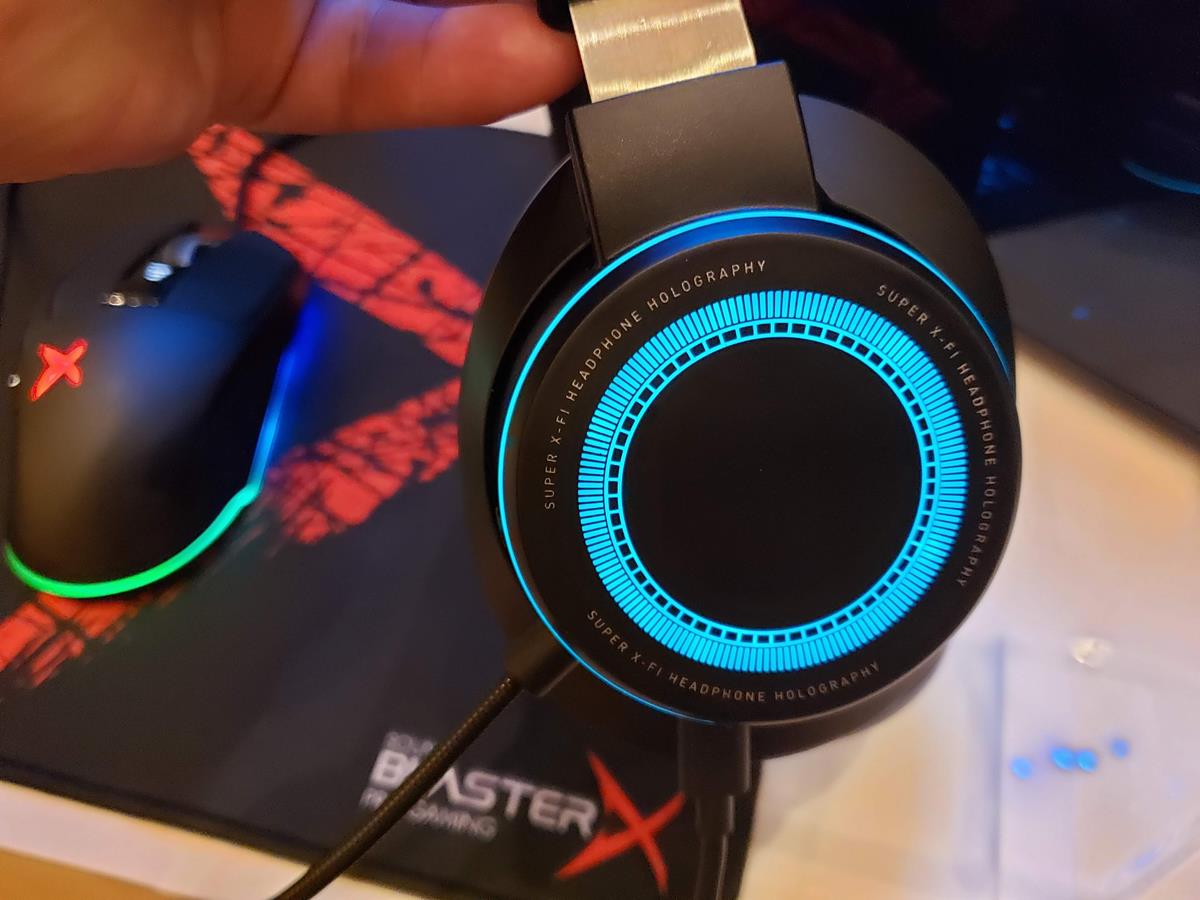 For movie enthusiasts, Creative Lab's new top of the line sound bar, the SXFI Carrier, coming later this year will also have Super X-Fi technology. One thing really striking about the sound bar was the size. It's not large at all, but it put out some really great sound in the demo room. Watching the Dolby Atmos sizzle reel and a scene from Blade Runner 2049, the sound bar outputted some incredible directional sound. You could hear things happening around and above you.

Buttons on the top allow you to control the sound bar when not using a remote. Connections so far are two HDMI 2.1 ports, and HDMI eARC port, and both USB-A and USB-C ports. You can also stream to it via Bluetooth as well. 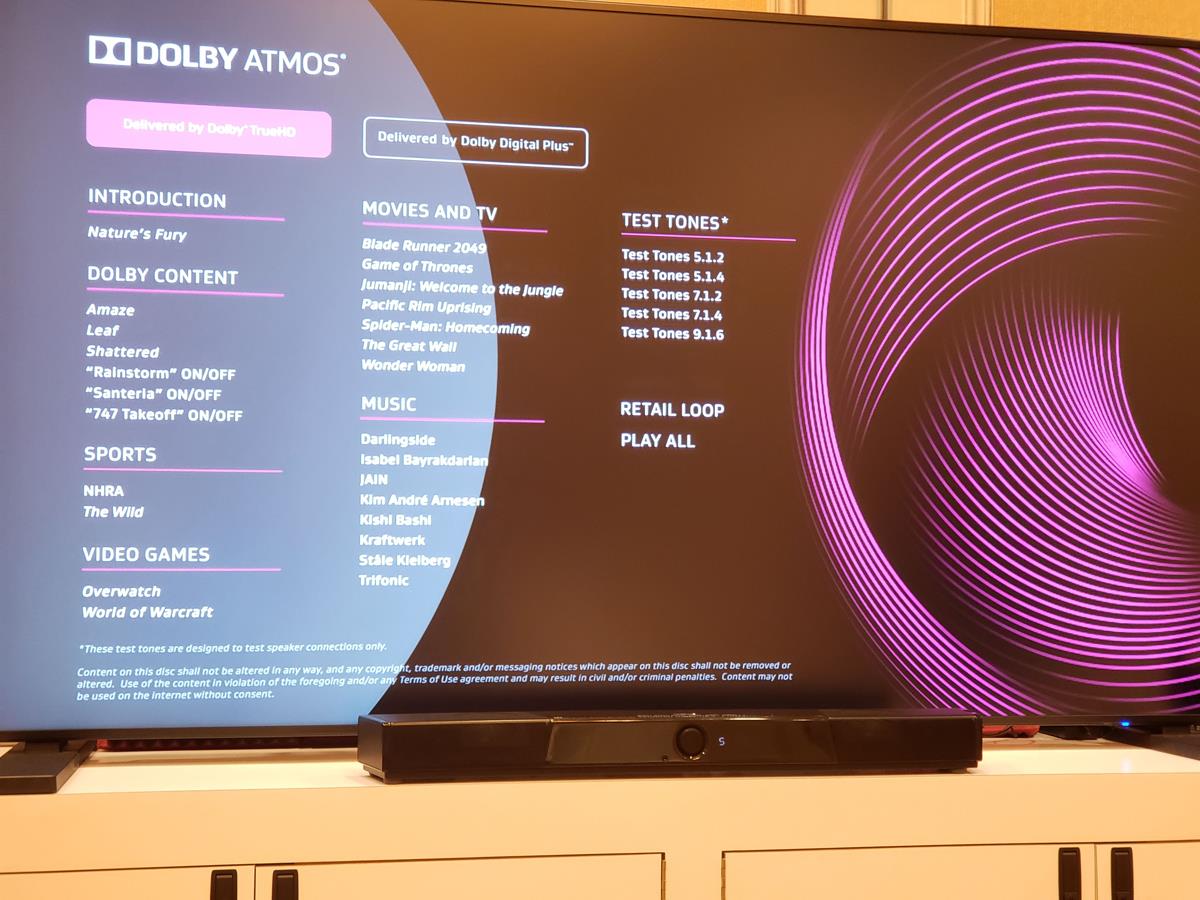 There are seven drivers that deliver the Dolby Atmos experience and the sound bar is rated at 450 watts. The bass was strong and pronounced, thanks to a 10" wireless sub that also didn't seem to be that big. It really had some good deep lows in the demos.

Super X-Fi in the CARRIER allowed for owners to plug in a headset and get that surround sound without waking up everyone else in your household. There's a 3.5 mm headphone jack in the sound bar, but if you sit far away, then that seems to be a cumbersome to use. Luckily, you can use a wireless dongle to connect a pair of headphones and utilize Super X-Fi across the room without having a long wire running to the unit. 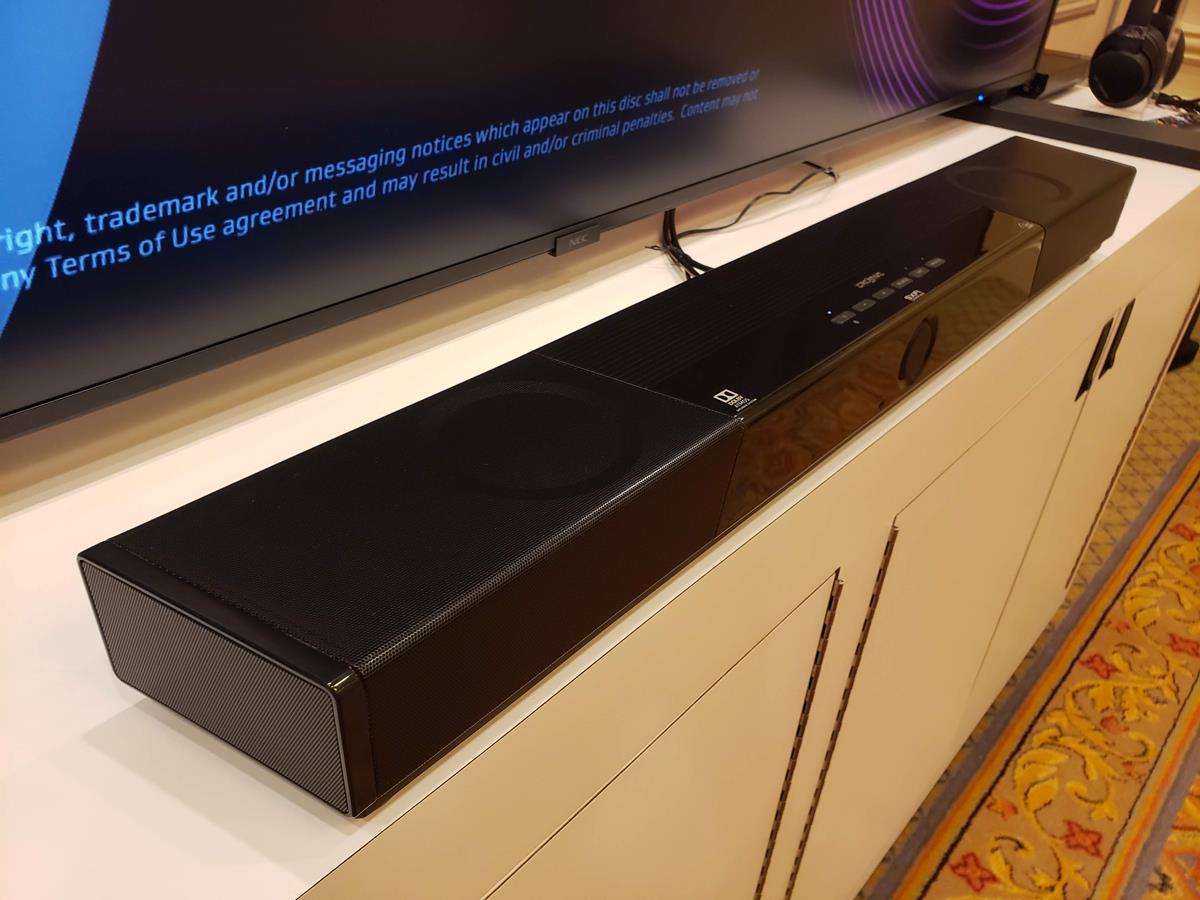 No pricing was announced but they're shooting for sub $1000, which is a far cry from the price of their old top of the line sound bar that was in the $4000 range

In the console space, Creative had the Sound Blaster G3 on display. It's a portable USB DAC that will enhance the sound coming from an Xbox One, PS4, and Nintendo Switch. You can use this on the PC as well if you like and it would compliment a laptop well since it's pretty portable. 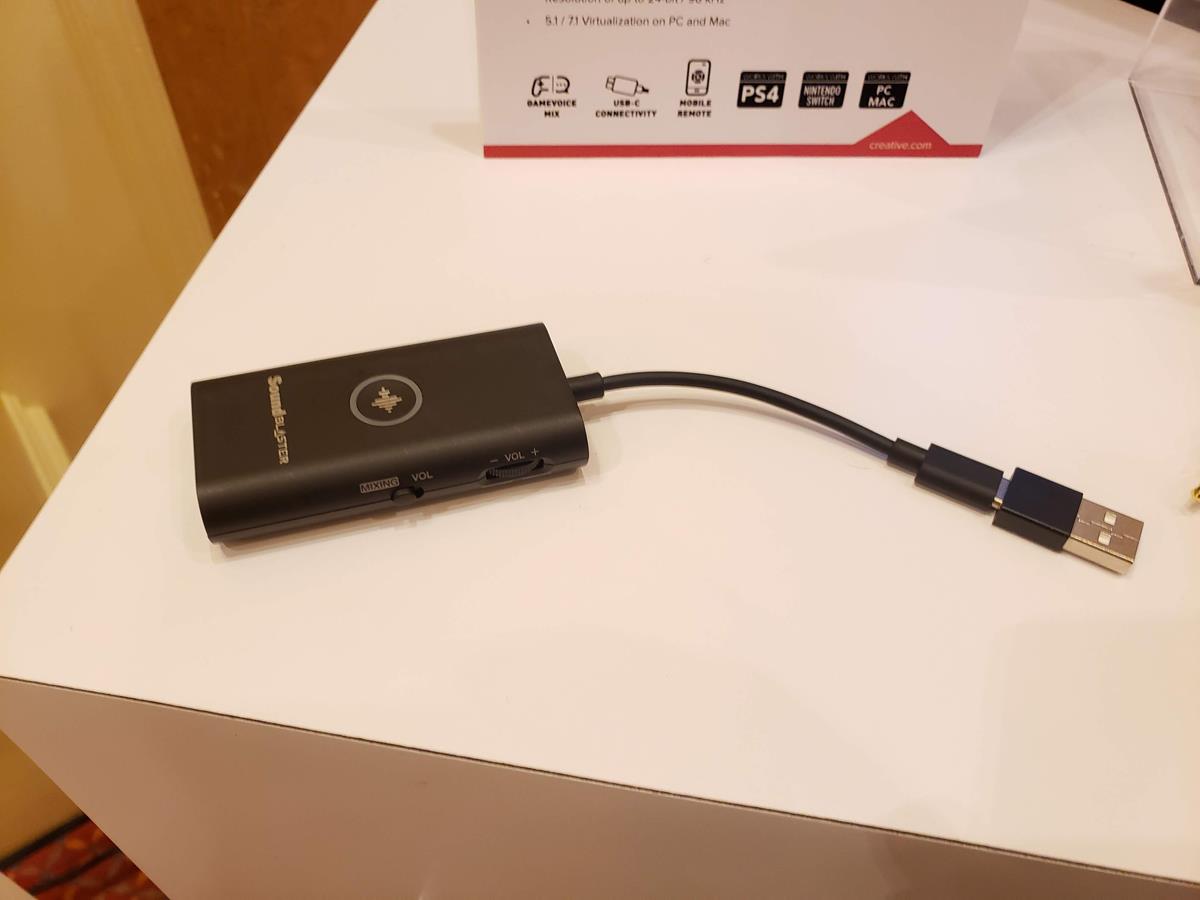 The GameVoice Mix feature of the G3 will give you hands on control of the volume for in game chat, letting you adjust on the fly to suite your needs. IF you want to enhance the footsteps in the game, there's a customizable EQ that lets you adjust the sound for those as well.

At $59.99, it's priced pretty aggressively for this type of product.

Finally, we have the Sound Blaster X3, which is another external sound card but with Super X-Fi technology built in. Virtual and discrete 7.1 surround sound will give you immersive sound around you. 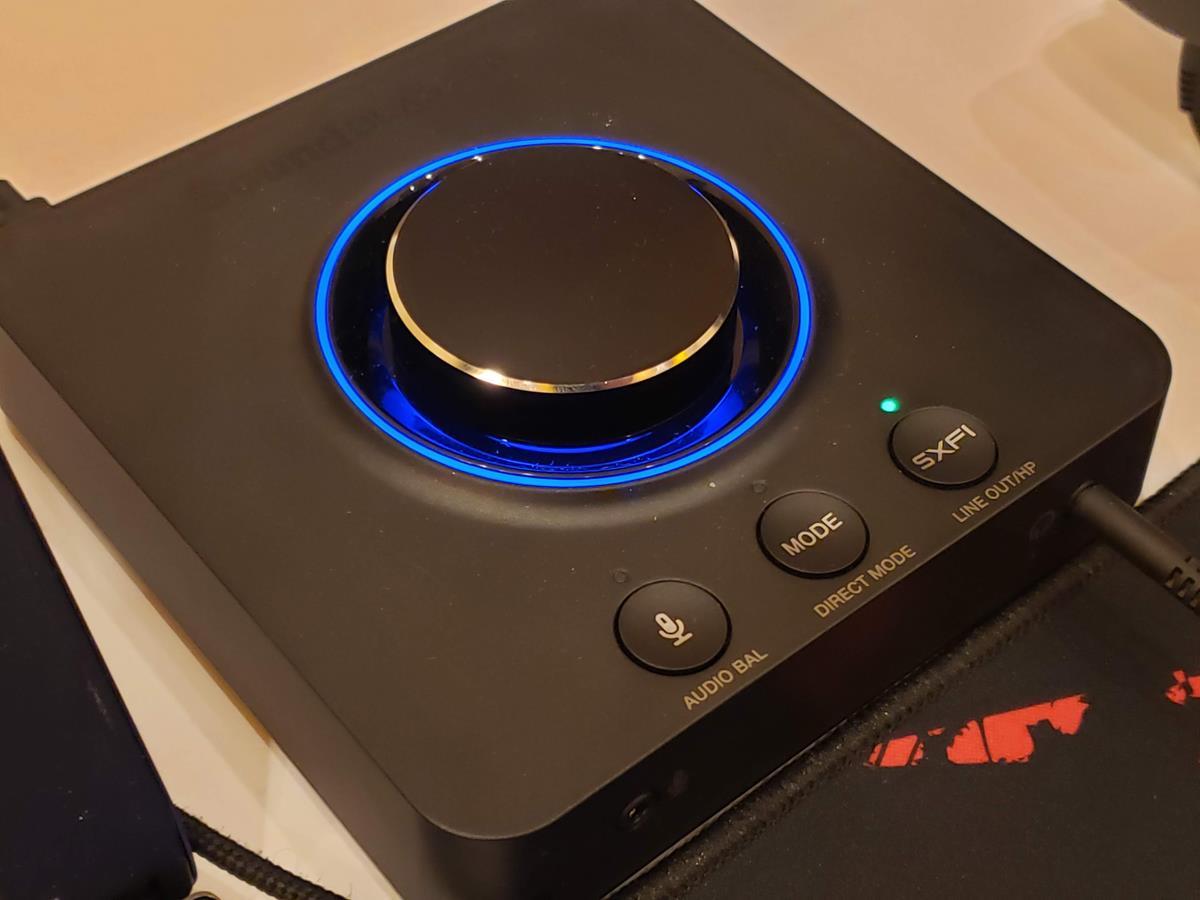 The big selling point is it brings Super X-Fi to your computer and console. Just plug this in via USB and connect your own headphones, setup the software, and you're good to go. I watched a few demo movies with the X3 and it delivered the same Super X-Fi experience as with the small DAC that was demoed to me this year and last year.