The Zombie Army series is one of those weird, anomalous double-A game series that still manages to be an evergreen IP for publisher Rebellion. A spinoff of their well-regarded Sniper Elite series, the Zombie Army Trilogy sees Adolf Hitler making a deal with the occult to snatch WWII victory from the jaws of defeat by...reanimating all the dead Nazis as zombies.

The gameplay still focuses on sniping, but with a more action-oriented approach and more linear levels. And in the first half of 2020, it's coming to Nintendo Switch! I swear, Switch is basically the ultimate port machine at this point. Honestly I can't feel terribly excited or annoyed at this; Zombie Army Trilogy is just good old guilty pleasure fun and it will probably end up as another solid party game on Switch.

Oh and if you thought this series was dead and buried, Rebellion wants to remind you that Zombie Army 4: Dead War arrives on PS4, Xbox One and PC on February 4th. 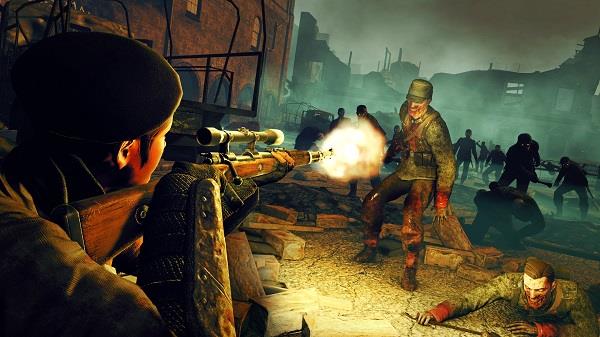 Oxford, December 17th 2019 – Nobody is safe from the Führer’s reanimated scourge! Independent UK studio Rebellion is delighted to announce its cult shooter hit ZOMBIE ARMY TRILOGY is coming to Nintendo Switch in the first half of 2020.

Playable in singleplayer or in co-op for up to four players, ZOMBIE ARMY TRILOGY features frenzied undead-shooting action across three nerve-shredding story campaigns and its brutal Horde mode.

In the dying flames of World War II, Hitler has unleashed one final, unholy gamble – a legion of undead super soldiers that threatens to overwhelm the whole of Europe!

Take on unrelenting hordes of harrowing enemies, from zombie soldiers to armoured skeletons, and fire demons to chainsaw-wielding elites – before facing the demonic dictator himself!

The Zombie Army series has sold 4 million copies worldwide, and the next blood-curdling instalment ZOMBIE ARMY 4: DEAD WAR launches February 4, 2020 on PS4, Xbox One and PC.