Teased last week, The Surge 2 has officially released their Season Pass. It checks in at $20 and promises new weapons, gear sets, enemies, and bosses wrapped around a new storyline and in a new district location. The content will roll out in accordance with the roadmap in the image below:

However, you don't have to wait for the content roll-out to get your hands on the Borax-I Quantum. That's available immediately with purchase of the DLC Season Pass. The pass is available now on the associated digital marketplaces for PS4, Xbox One, and PC. 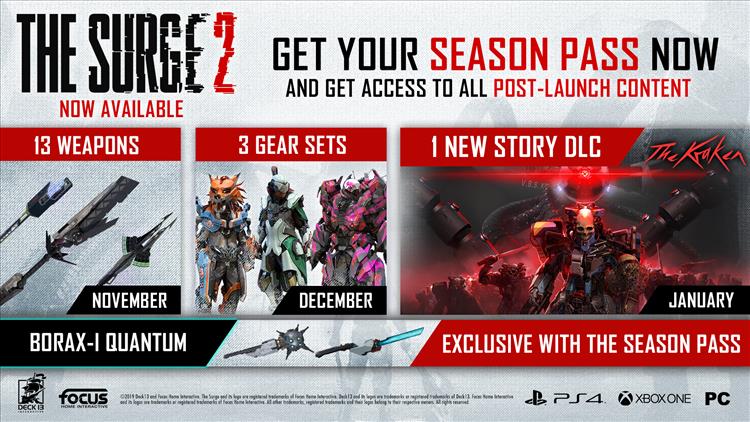 The Surge 2, Deck 13’s latest futuristic Action-RPG releases its Season Pass today, chock-full of content coming in the next months to PlayStation 4, Xbox One, and PC. Players who purchase the Season Pass will experience new weapons, including the exclusive BORAX-I Quantum weapondepicted in today’s screenshots, new gear sets, and a brand-new storyline in a new district introducing fresh enemies and bosses. The release schedule and contents of the Season Pass are outlined in our post-launch roadmap below.

13 new weapons will arrive in The Surge 2 in November, followed by three complete sets of gear for your exo-rig in December. Finally, in January, players can explore a brand-new location - a mysterious aircraft-carrier - in the big extension "The Kraken" that includes hours of new content, and a sinister new threat.

The techno-crazed citizens of Jericho City are crafting fresh killing tools and exo-suit attachments all the time. To acquire these new sets, players must find these mad pioneers and tear the prize from their bodies.

Purchase the Season Pass right now on PlayStation 4, Xbox One, and PC at 19,99€/$ to get the exclusive BORAX-I Quantum weapon immediately and guarantee yourself hours of more visceral gameplay content.

The Surge 2 is out now on PlayStation 4, Xbox One, and PC.