I've spent a good chunk of this weekend hiding from my children and learning the ropes of Rhino Games' new collectible card game Mythgard. Before I start explaining what Mythgard is, it is important to understand who the folks at Rhino Games are, and what they are up to.

I pulled the following highly enlightening text from the Rhino Games website:

"Rhino Games was established in 2016 by Peter Hu and Paxton Mason based on their shared passion for collectible card games and their deep dissatisfaction with the current titles in that genre. The pair have intersected many times in the past at various companies: first meeting at Flagship Studios where Peter Hu was a founder, then intersecting again at Gazillion Entertainment and even at Google, where Paxton was a member of the secretive X team.

"They developed the core game engine working for half a year out of cafes and libraries before renting a small one-room office in San Mateo and bringing on their dream-team of collaborators: the absolute best of the design, art, and programming talent that they’d worked with in the past 25 years in the games industry. With the backing of the entire founding team of Blizzard North, Rhino Games is stealthily working towards their dream of revolutionizing the CCG genre." 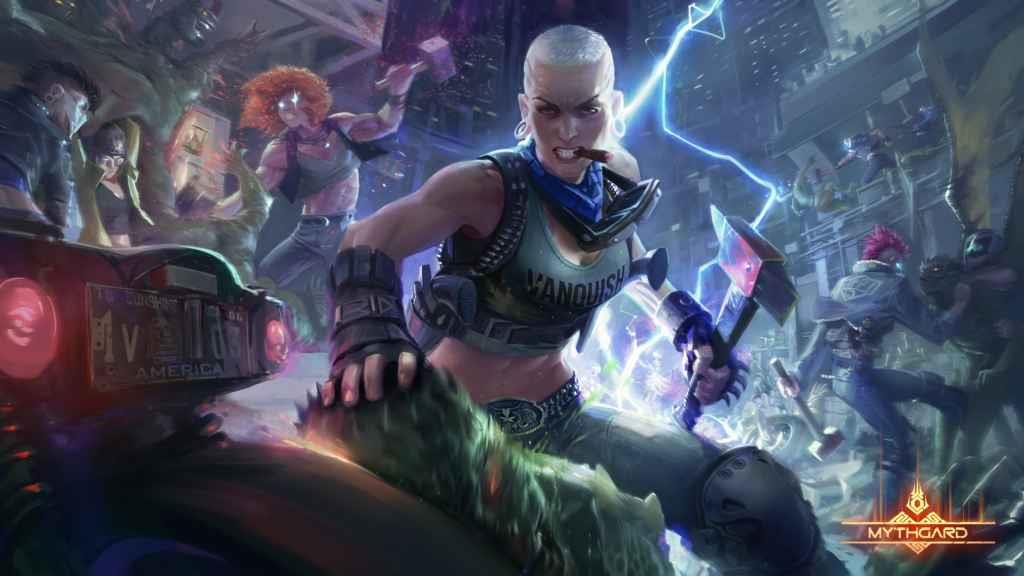 There are a few key phrases in those paragraphs, the most important of which is probably "with the backing of the entire founding team of Blizzard North". These are some serious industry veterans, and if the Open Beta of Mythgard is any indication, they aren't messing around.

Though Mythgard has been in Open Beta only a couple of days, it feels like a very polished, complete experience. New players would be best served by jumping fright into the story, which is served up comic book-style, with some pretty spectacular world-building and art work. Frankly, for a free-to-play CCG, the development team didn't need to make something this cool. I don't want to say that they are showing off, but the story (which currently consists of one lengthy "to be continued" chapter) certainly impresses.

The world of Mythgard is intriguing and cool, with various factions made up of mythological creatures controlling different areas of a futuristic city/state (I think). The story is a hoot so far, and I'm actually looking forward to reading future chapters. You could probably convince me to read a comic book or novel based in this world. It's really well developed, and each twist to the story only served to make me want to see more.

By the time players finish the story, they should be well-enough equipped and trained to start trying out some of the other modes. There are all sorts of ways to play; your standard casual and ranked PVP, Brawl Mode - which allows you to take on various CPU-controlled opponents, Gauntlet - which allows you to build a deck from various pre-selected cards, then try to take it to battle (I always suck at these modes), and an interesting puzzle mode that sets up players in various circumstances and asks them to clear the board in one turn.

The gameplay of Mythgard will feel familiar to most CCG veterans, with a few new wrinkles. Most interesting is the "card-burning" mechanic, which asks players to burn cards from their hand in order to build up mana. You don't have to burn cards, but the game doesn't deliver mana otherwise, so you have to make some tough choices right out of the gate when you start each hand.

While Mythgard does a great job teaching the basics, I did struggle to understand some of the more intricate rules. Cards can carry a variety of powers and abilities, and I was often surprised by how things played out. I would sometimes attack with a card expecting to do some serious damage, only to have it blow up in my face without really understanding why. Some smart UI does a great job of showing what abilities are included in each card, but the way these powers work together continues to elude me a little bit.

And of course, it is difficult to jump into a game that others have been playing for a while. I can always tell in PVP mode when I am playing someone that is experienced from the closed beta, as they come to the table with a wild array of stuff I've never seen before. So I suppose some refinement in the matchmaking would probably be helpful long-term, to keep newbies from getting discouraged by repeated shellackings.

But regardless of some growing pains, Mythgard is definitely worth a look - and the spectacular artwork on display will probably bring you back for a second look. Really, I'm not one to be impressed by art in CCG games, but damn - this is a nice looking game.

I'm a sucker for CCG games. I tend to try almost anything that comes to market. There have only been a few games that have any longevity for me, but I'm already in for about 10 hours on Mythgard, and I only downloaded it a few days ago. I've already installed it on two PCs, my old iPad and my Android phone. I think I like it.