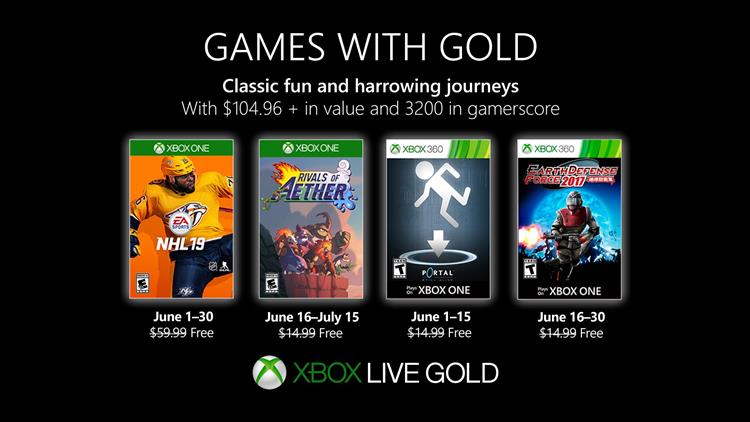 June is right around the corner, and that means a whole slew of new Games with Gold titles will be available over the next 30 days.  This month is highlighted by NHL 19, Earth Defense Force 2017 and Portal.  This is a pretty good haul, with several prominent titles included this month.  Check out the trailer, and then the info below or at Xbox Wire.

Check out the each of the titles below with the brief Xbox Wire description, ERP, release date and GN Review score (if applicable).

EA Sports NHL 19 ($59.99 ERP): Available June 1 to 30 on Xbox One
Rise from the ponds to the pros in EA Sports NHL 19. It’s playoffs season and there is no better time to play this exciting sports title. Build your player from the ground up and compete against over 200 hockey greats in a gameplay system that delivers explosive-edge skating, responsiveness, and jaw-dropping hits.

Rivals of Aether ($14.99 ERP): Available June 16 to July 15 on Xbox One
Summon the power of the four elements: Fire, Water, Air, and Earth to battle your opponents in Rivals of Aether. Unravel the mystery of the planet in Story mode, band with friends in Abyss mode or test your skills against other players online. Skills and tactics are key in this electrifying platform fighter.

Portal: Still Alive ($14.99 ERP): Available June 1 to 15 on Xbox One and Xbox 360
The ever popular and darkly comedic Portal: Still Alive is coming your way… with cake! Using Aperture Science’s portal technology, break the laws of physics and solve brain-bending puzzles to escape the sinister laboratory you are trapped in. Manipulate your environment and experience hours of fun with the classic award-winning first-person campaign.

Earth Defense Force 2017 ($14.99 ERP): Available June 16 to 30 on Xbox One and Xbox 360 (GN Review)
Defeat the Ravager armada in Earth Defense Force 2017. For four years, the population knew alien invaders were coming, so the Earth Defense Force was created to stop them. Now is that time. Annihilate swarms of enemies, some 20 stories tall, using your reconnaissance, infantry, and special ops forces. With all manner of weapons and vehicles at your disposal, defend the planet at all costs.