I've always thought of mods as the digital equivalent of street art. Modders are the clandestine artists that dig through a game's files in order to reface it to their own vision. Sometimes it's a labor of love to bring the original game to par with our expectations. Every so often, what a modder finds while mucking around can cause some controversy. Although if we're being honest, most of the mods you find, like the art you see on the street, is downright sophmoric (and hilarious). But the best mods, like any work of art, are the ones that hold up a mirror to reflect how utterly ridiculous the real world is.

The Civ V FIFA World Cup Host Resolution mod is a darkly brilliant satire of one of the world's most blatantly corrupt yet celebrated 'non-profit' organizations. The mod's creator, Steph, says in the description

"There have been dozens of FIFA branded video games. Dozens. Yet every one of these titles ignore the all-powerful FIFA in their gameplay. They don’t showcase the scandal, the copious wealth, the controversial remarks. They’re just about soccer. And that’s not enough. That’s not FIFA. "

In the FIFA mod, you participate in a 'bidding war' to host the world cup. If you win,you only have a few years to build a stadium and infrastructure required to host the games, but luckily you get plenty of gold from your sponsors, as well as a new unit- Migrant Workers, which are half the cost of regular workers and have increased movement. With a nearly endless supply of them, you have the cheap, disposable labor needed to build your own Lusail. Go read the mod description for a laugh, and then read the informational links Steph was kind enough to provide at the end and have yourself a nice deep sob, letting the misanthropy settle into your soul.

If you liked that, you should also check out Steph's City of Toronto mod, featuring Mayor Rob Ford.

(painting below by Paulo Ito) 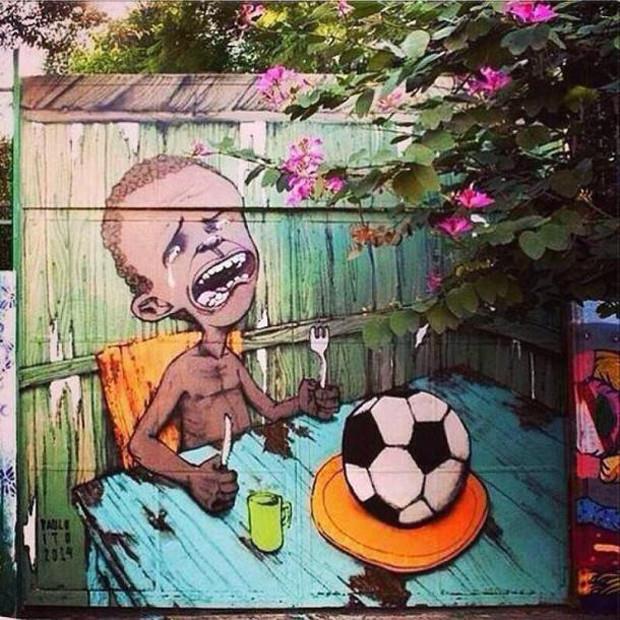