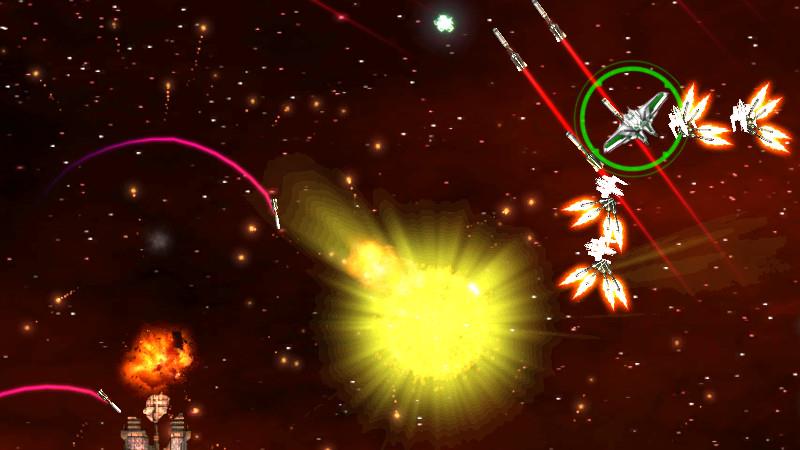 Never Not Shooting is a game that simply screams “old school arcade”. While the game was released to Steam in mid-2017, this is a title that would have knocked players’ socks off in the smokey bowling alley videogame rooms of the 1980s. Never Not Shooting is a classic one-screener, with all of the action taking place on one stationary plane. Think Asteroids, and you get the idea.

With a level of intensity that rivals old school games like Robotron (and more modern classics like Geometry Wars), Never Not Shooting establishes a simple game loop, then works the player over with that loop until their eyes are bleeding. This is the sort of game that makes your hands go numb because you're gripping the controller so tightly.

Never Not Shooting is, at its core, a twin-stick shooter but it feels old-school in the best possible ways. In fact, while the controls are more complex, the aforementioned Asteroids resonates strongly in the DNA of Never Not Shooting. Players spawn into the upper left of the screen. In the center of the screen is a glowing yellow sun. Bad guys appear in escalating waves – flying in from the edges of the screen - and attack the sun. It is up to the player to protect their star before the bad guys do too much damage. No matter what you do, the attacks will continue forever – getting more and more intense - and that sun is eventually going to go nova. It is your job to stave off the inevitable for as long as you can.

Having the sun at the center of the screen makes for a surprisingly unique twist in the twin-stick genre. The sun lurks there, the target of constant attacks by alien ships, but also an obstacle to be avoided. As is predictable – but still sucky when it happens – flying into the sun instantly destroys your ship. And of course, your own stray shots can go flying into the sun, doing unintentional damage and shortening your game. 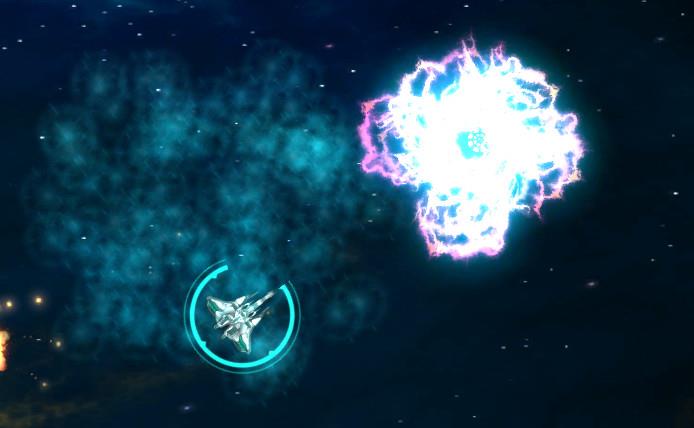 Your little hero ship is equipped with an energy shield, which protects you from damage and regenerates to a point. But eventually, your shield seems to give up the ghost and stops rebuilding itself. Luckily, the player can die an infinite number of times in a game, so long as they continue to keep the growing swarm away from the sun. However, once the attacks become heavy, having your ship explode almost always equates to a game over. The time it takes to respawn is usually more than enough for baddies to blow up your precious star.

To help combat the bad guys, the player gets to stack their ship before staring with picks from a number of different weapons with which to arm their spaceship. After trying out all of the options, I pretty quickly settled into my loadout of choice, as demonstrated in this gameplay video:

If that gameplay looks fun, that’s because it is. I eliminated my voice track from the video due to the non-stop swearing towards the end (and one instance of me yelling at my kid to “GET OUT!” when he wandered in). As you can see in the video, Never Not Shooting ramps really nicely, letting the player get their bearings before unleashing hell. There are also occasional lulls in the action, which allows players to scratch their noses and wipe the sweat from their brows.

I prefer the homing missiles and the proximity laser as my primary and secondary weapons of choice, as both take some of the responsibility of “aiming” off of my plate. The homing missiles will seek out and destroy enemies (to a point). And the super-useful proximity laser will lash out at and destroy any enemies in your direct vicinity, mitigating a lot of collision damage that I would have surely suffered otherwise. A third “special” weapon is available, but to be honest, I mostly forgot that it was there. 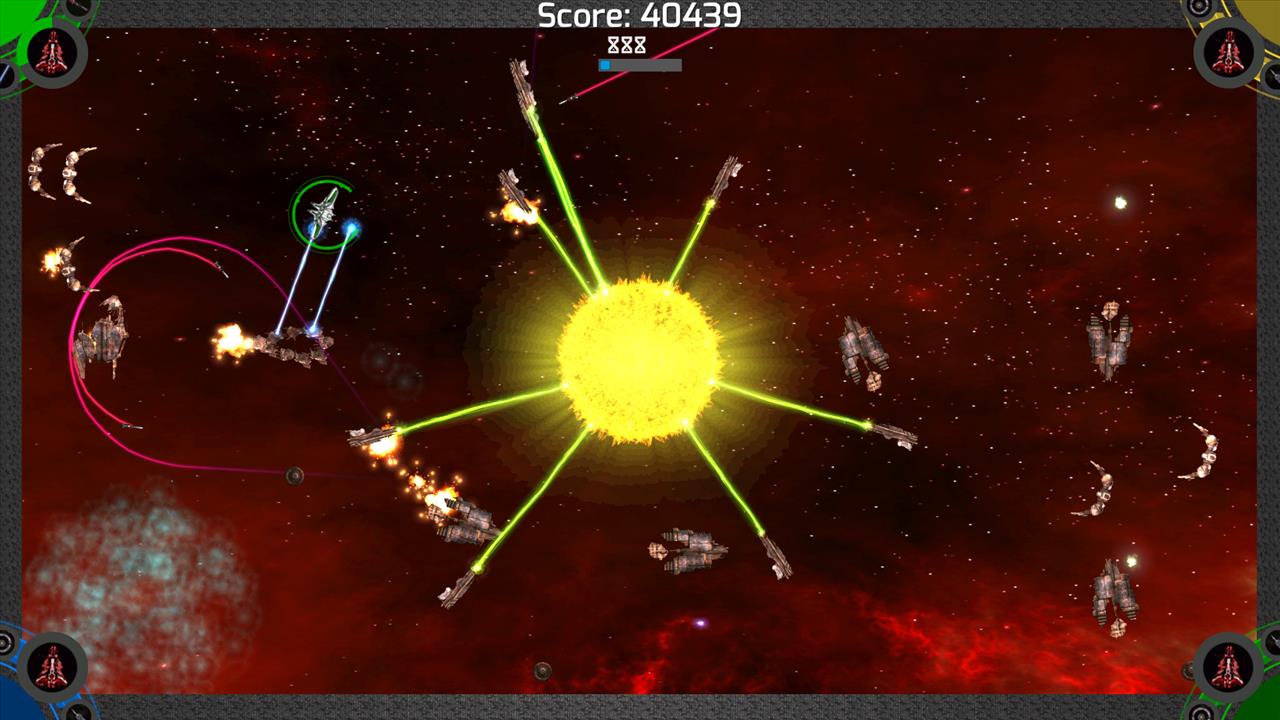 Once you have your weapons locked in (and your color palate secured), you are ready to start chasing your previous high score. This is one of those games that pulls players into a loop of “one more time” gameplay, as it tracks both high scores and how long players can survive. Rounds can easily go for ten minutes after you get a bit of practice, which means that if Never Not Shooter truly were an arcade game, it would totally be worth the twenty-five-cent investment. Enemies spawn randomly, which lends a lot of variety and re-playability to an already highly re-playable game.

The controls in Never Not Shooting are tight and responsive, which is a must for twin-stick shooters. The graphics, while not displaying an overabundance or detail, are nonetheless attractive and functional – with enemy types instantly recognizable, and explosions and effects lighting up the screen. It is also important to note that I never once lost track of my ship in the midst of even the heaviest action – a lesson that a lot of big-budget game studios have yet to learn. The soundtrack and effects are sufficiently driving to help raise the tension as your sun nears its damage threshold, which had me gripping my controller so tightly that it’s a miracle that I didn’t snap it in half. 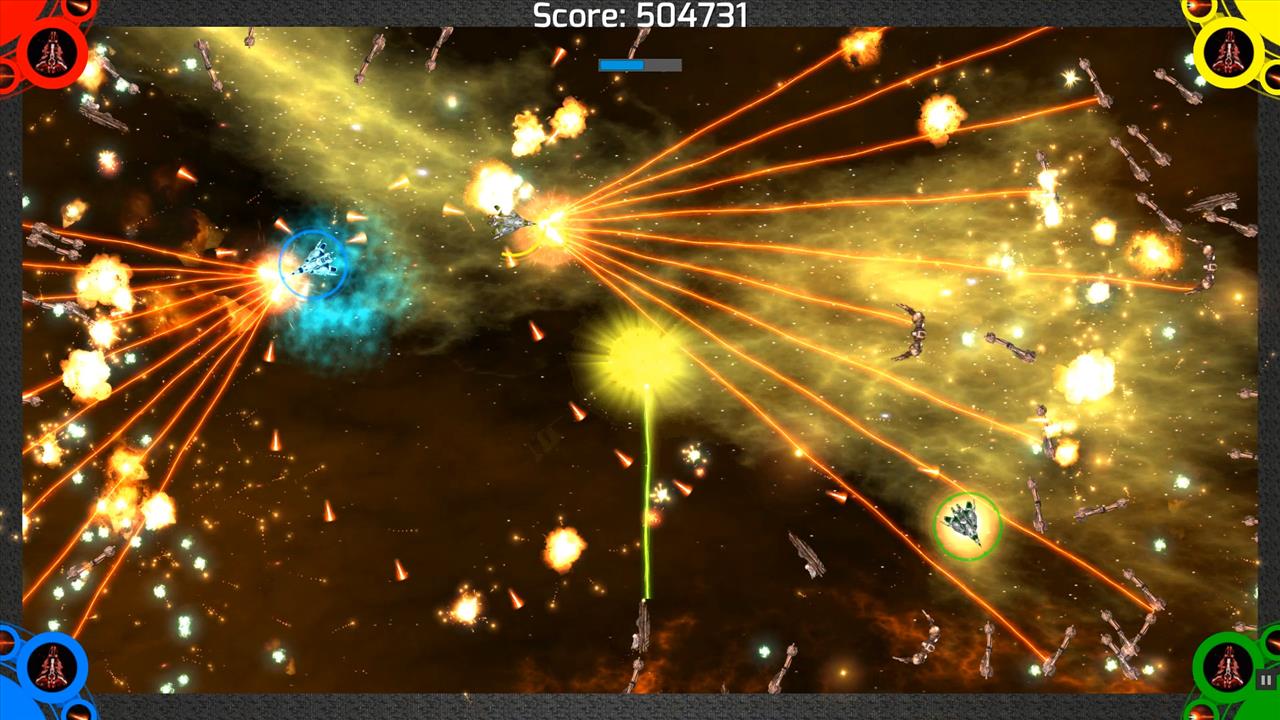 One area that is a little lacking in Never Not Shooting is a general tutorial. Even a screen that defined what was going on in the game with a few icons and explanations would have been welcome. How does the upgrade system in the upper right corner work? What do the little sparkly guys that you pick up after killing baddies do? I think I know, but I’m not 100% sure. Although not offering explanations is in line with Never Not Shooting’s arcade roots, I sure would have liked a few pointers.

Unfortunately, I was unable to test the local multiplayer - which the achievements refer to as "the way the game is meant to be played". The game features a full set of witty achievements, many of which are based around how well players perform in comparison to their friends. Sadly, I have no local video game playing friends in close proximity, and my children are too young to be competent at twin-stick shooters. 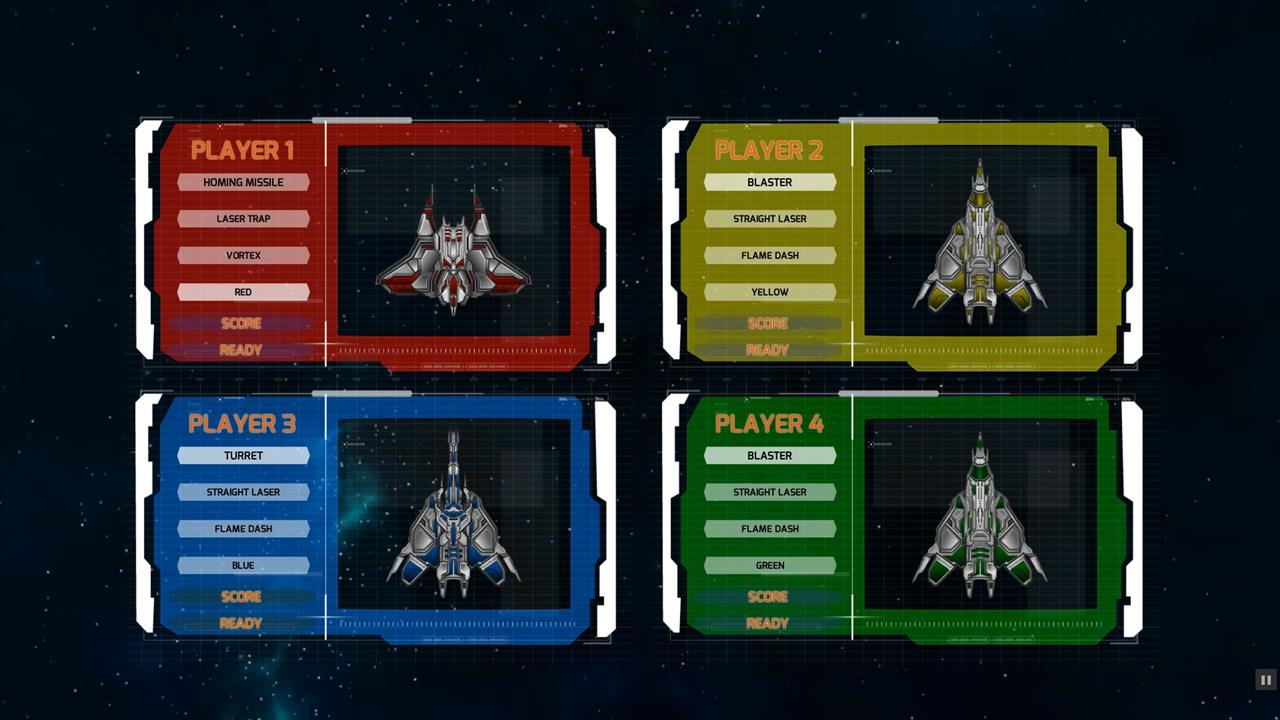 But I did get plenty of entertainment out of Never Not Shooting as a single-player game, and I could see myself returning to it regularly when I need a quick hit of arcade action without wanting to commit to a long play session. I also think that it goes without saying that this game would be a spectacular fit for the Nintendo Switch.

Never Not Shooting is an extraordinary value for arcade fans, as it retails for a scant four dollars. Arcade fans and fans of twitch shooters will likely have a grand time with this game, chasing high scores and staying alive as long as they can. If only I could teach my cats to play, I would be all set for multiplayer.

Never Not Shooting is a very effective arcade twin-stick shooter that tasks the player with protecting the sun from waves of baddies. With a number of different weapon loadouts to choose from, this is a game that can be played a lot of different ways – all of which are intense and enjoyable. A must for arcade fans, this game could slide right into a 1980’s cabinet without raising any eyebrows. Never Not Shooting is a hidden gem of a game, and is well worth its modest price.