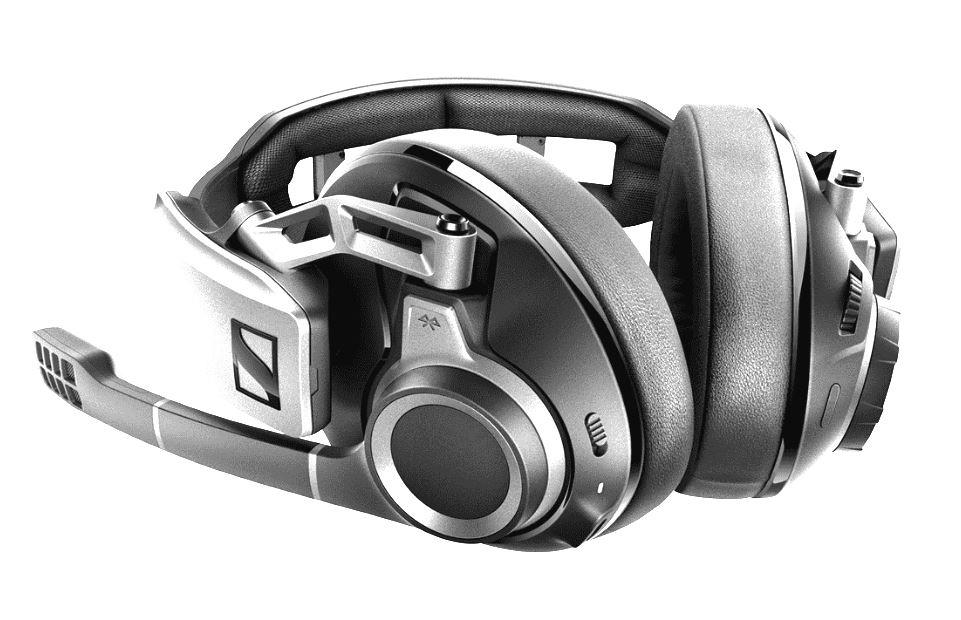 We have reached the third and final stop on our tour of Sennheiser gaming headphones. The last station that this technology train is hitting covers a wireless option that should make gamers quite happy, at least those who utilize a PC or PlayStation 4. Today we tackle the Sennheiser GSP 670 Wireless Gaming Headset to see just how it stacks up in today’s world.

Come get your specs! Hot off the table!

Here are the specs for the GSP 670 Wireless Headset:

It’s always a bit different working with wireless headsets because there’s more to cover, but we’ll start with the basics. The frequency response on both the microphone and headphones are perfectly fine, though in comparison to their sister headset, the GSP 600, they definitely have a tighter range as the 600 goes up to 18,000 Hz and 30,000 Hz respectively on the microphone and headphones. This is par for the course with wireless headsets, so nothing unusual.

I’m slightly disappointed that the USB connection is not USB-C. The market has been trending towards USB-C for some time now, yet this is still using a USB Micro connection to plug into the headset for charging and connectivity. It’s not terribly surprising, however. USB Micro still has a strong footprint, so it’s not an egregious error by any stretch.

Utilizing Bluetooth 5.0 SBC is what I expected when this headset arrived. SBC is low-complexity and is the default sub-band coding. There’s no reason to go nuts finding a specific codec that may have issues connecting with other devices. Keeping it simple is the best route, especially for Bluetooth. The 10 meter wireless range is pretty bang-on with my testing. I was able to listen to music being played on my computer from around that range as I moved around my office and my apartment. It’s as advertised and I suffered almost no connectivity issues even with obstacles in the way. 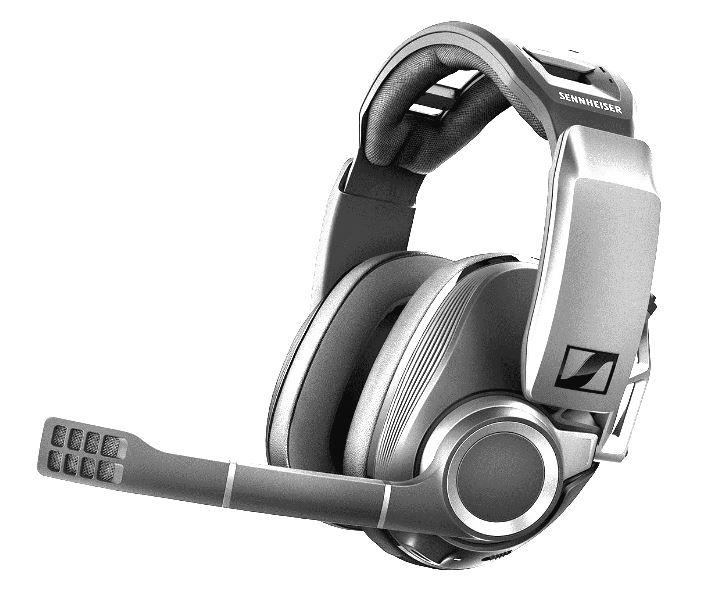 The short explanation is that the GSP 670 takes after the GSP 600 in just about every way. It’s still quite comfortable on my head and the ear cups use the same suede-like material that rest nicely. The headband adjusts the same way and has the same cushioning on top. It still won’t win any beauty contests because it’s a big, wide monster. The difference is that this is an all black unit while the GSP 600 I got has red and silver parts that make it stand out a bit more. The all-black design works better in this family, I think.

The same kind of volume adjustment exists on the right ear cup, but a second dial has been added behind it to allow quick adjustment of chat volume. You can go more in depth with some software, but we’ll get to that in a moment. The microphone lives up to the high standards that Sennheiser sets and works like a charm. The pairing button is on the left ear piece and will also give the user the amount of battery life left once paired with a quick flick of the button.

A dongle comes with the GSP 670 for quick connection. There’s no issue pairing it up with the PC or the PS4 because hitting the pairing button, then plugging in the dongle results in almost an instantaneous connection. I’ve had some problematic headsets in the past that require some patience to get paired, and that may just be Bluetooth technology improving. Whatever Sennheiser has done to ensure a good connection, it works splendidly. Xbox owners, I’m sorry to say that you’re left out in the cold on this one because it’s not compatible. 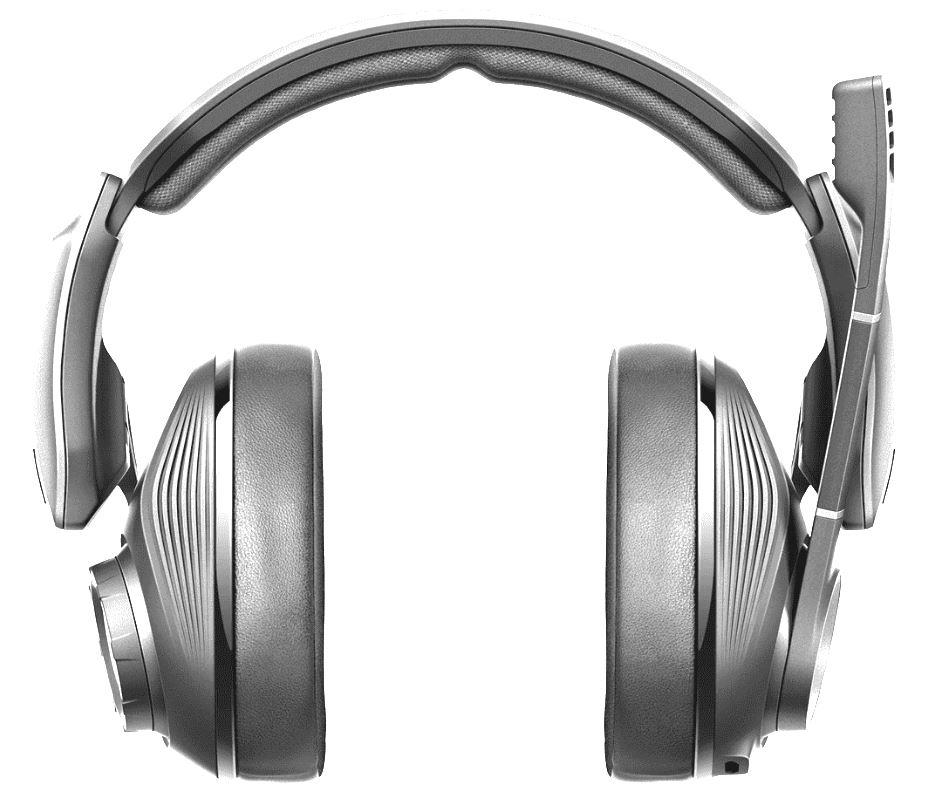 In my two prior reviews of Sennheiser products, I talked about how the GSP 300 and GSP 600 are no-frills, clean cut audio. The GSP 670, however, dives into those advanced options by offering the Sennheiser Gaming Suite as a quick download for the PC. It’s a simple equalizer that offers either straight two channel audio or a bump to 7.1 surround sound. On top of this, the audio is fully customizable from 80 Hz all the way to 12,000 Hz, as seen below. 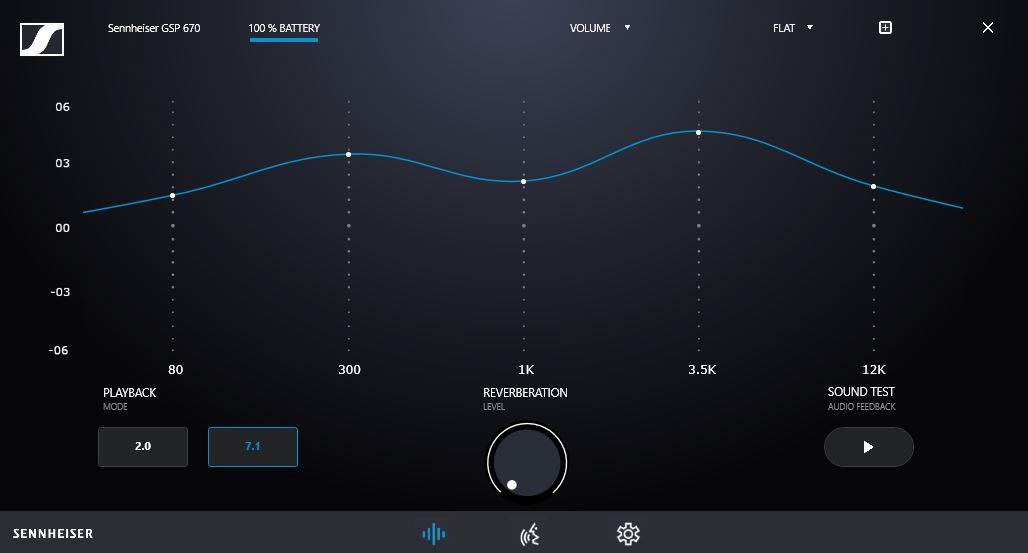 There are presets, of course. Even better is that they can be cycled through without opening the suite by a press of the button on the bottom of the right ear cup. It’s a great option to have, though I preferred playing around with the EQ settings as much as possible to find the sweet spot for my own tastes.

The Gaming Suite also offers customization options for the microphone in the form of a voice enhancer, standard setup options, and noise cancellation. I tested out every combination I could think of with my site partners via Discord to see what worked the best. I ended up with a warm enhancement with the gain down low and maximum cancellation. Most of the combinations still sounded good, but it was nice to have that quick feedback as I played around with the choices. The setup, much like the EQ options, is simple and easy to control: 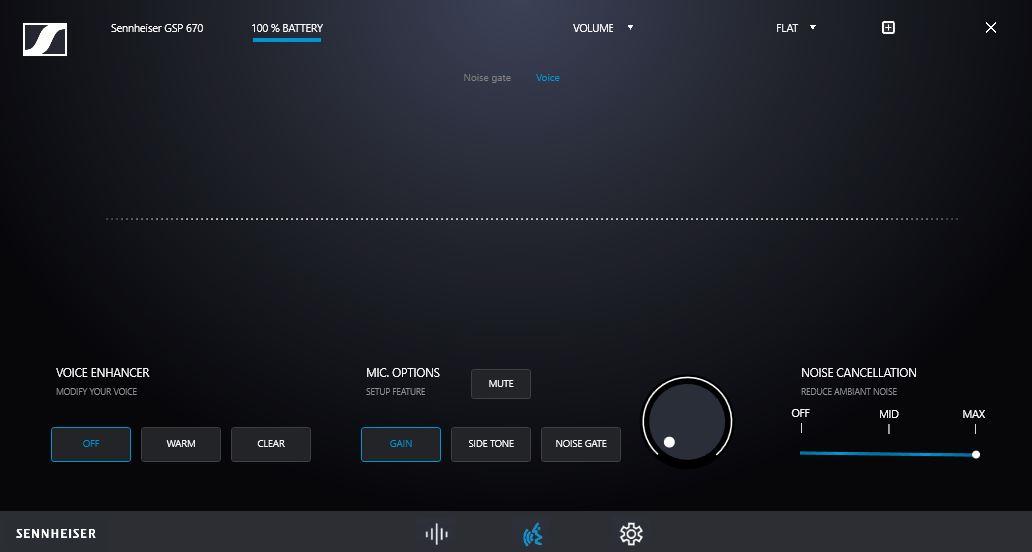 There is a settings page in the suite as well, which allows users to check the software and firmware version to ensure everything is up to date. Options to turn on or off auto-sleep and an audio device check are great to have in order to conserve battery life.

So how does it actually sound?

In a word? Fantastic.

Going more in depth, I’m not sure there’s a more balanced headset out there that is specifically for gaming. The true test of any good headset is how much detail comes through in the simplest of environments. For example, when playing Skyrim, how well do the footsteps sound when I’m running? What about the clanking of the armor as movement picks up? Even just basic tones like a dog barking in the distance can be improved upon with a great headset. The GSP 670 handles all of this so well by keeping a balance without having to compensate.

I was slightly disappointed with the 7.1 surround, but it’s only in comparison to the other headsets that I have at my disposal. That’s not to say the surround isn’t working when I activate it in the suite. I know what direction those voices are coming from in the market, where the zombies are groaning at in 7 Days to Die, and where that massive star is after I make a frame shift drive jump in Elite Dangerous. That’s what I want out of surround sound, and even if it isn’t the best I’ve ever heard, it’s still immersive.

I’ve been testing both open and closed designs in the past couple of months, and while it isn’t fair to test the Ananda-BT against the 670, I don’t have any other open-back options. Given that that Hifiman’s Bluetooth headphone is over $600 more in price, it bears mentioning that the closed design is still preferred for me when I’m gaming. With standard music, it’s a different story. That being said, Sennheiser knows what they’re doing and the GSP 670 handles everything in stride. Listening to my lossless audio files was a treat even over the wireless, and that’s a great sign that Sennheiser is still on the top of their game.

Let’s get back to the microphone for a moment. The 600 and 670 are almost identical in the base sound quality when utilizing the microphone, but those customization options I mentioned earlier truly make a difference. With cheaper headsets, a gamer is basically going to ride or die with what the headset’s default setting is while being at the mercy of the Windows 10 gain controls. That’s no way to go into a long session, so I’m thankful that the software not only works, but is quick to access and easy to change. 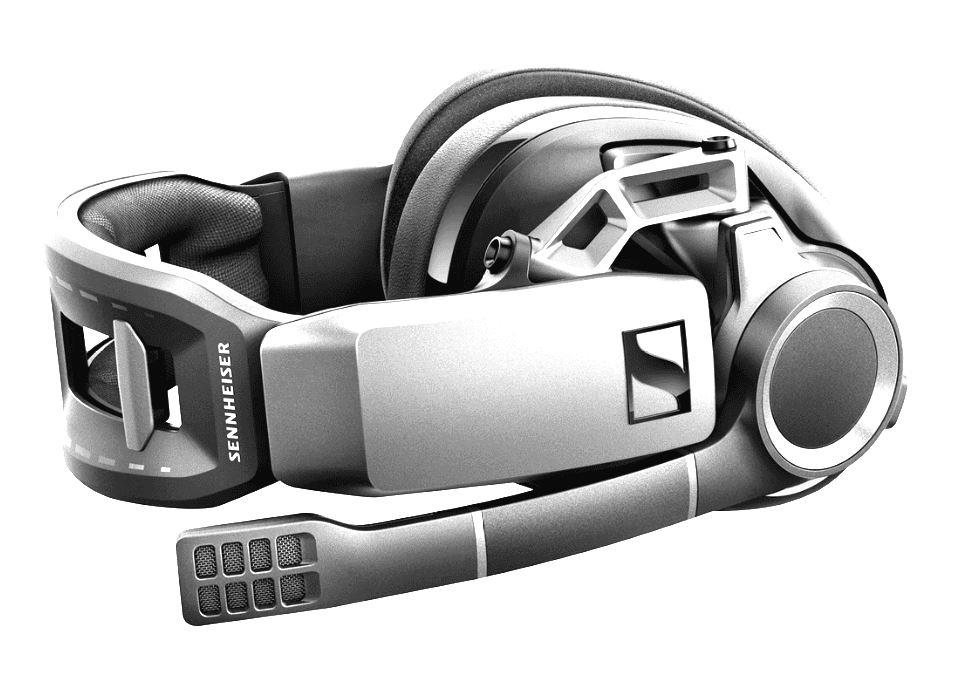 What’s this going to do to my wallet?

Currently, the GSP 670 is listed at $349.95 on the Sennheiser website. I have seen the price below the $300 level a couple of times on Amazon while testing the review, though it sits at $308.56 as of publication time. Yes, it’s more expensive than its sister headset and that’s due to the wireless option. Wireless headsets are going to be a premium price for that convenience, and if it’s important to you but you’re considering the GSP 600, there’s little to no reason why you shouldn’t step up to the 670.

We’ve reached the end of this three-review journey, and I’m glad we saved this one for last. The GSP 670 is a wonderful headset that offers default options for the simplest of users, yet has the customization capabilities that audiophiles will crave when they are settling in for a long gaming session. Much like its sister, this headset isn’t about to win a “best looking headset” competition, and that’s okay: It’s the audio that matters. The 670 packs a punch in clarity and complexity with world-class communication via Sennheiser’s microphone. I hope in the future they can find a way to do something about the bulk. The battery life might be a point of contention for some users because it means having to charge more frequently than other wireless headsets, but 20 hours is still plenty good enough that the complaints should be minimal.

A wonderful headset with enough options for audio and communication, the GSP 670 is a welcome addition to any gamer's battlestation. It ain't a pretty headset, but that's a small price to pay for wireless audio that isn't flat. I've been writing about games and entertainment since 2006 after starting out at Xbox Ohio.  Since then, I have made the jump to Gaming Nexus and have enjoyed my time here.  I am an avid gamer that has a solid old school game collection that includes the likes of Final Fantasy games, Earthbound, Gitaroo-Man, MvC2, and a whole slew of others.  I have a primary focus on Xbox/PC games and PC peripherals and accessories.  If you ever want to game against me, you can look me up on XBL with the gamertag GN Punk. View Profile