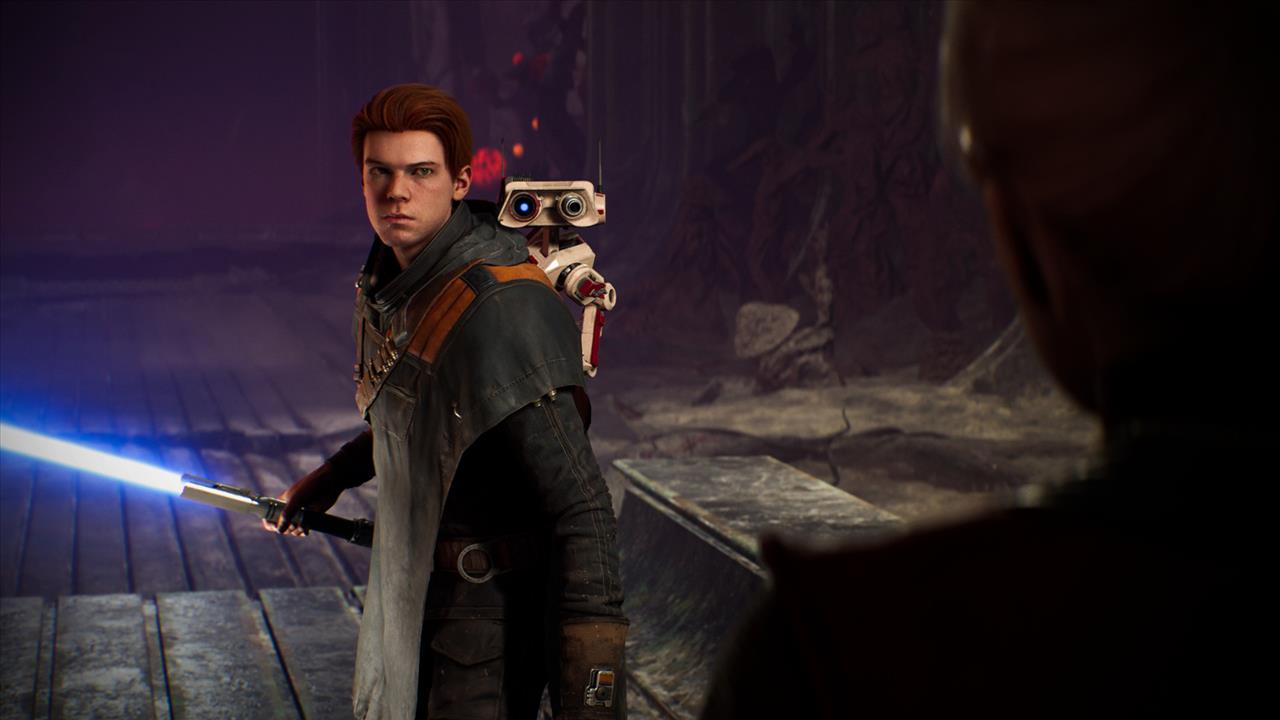 Star Wars Jedi: Fallen Order is the type of game that players don’t see a lot of anymore. Taking cues from Star Wars titles as well as tons of others, it implements story and character beats, along with challenging action and puzzles, to create the best Star Wars game in years.

Following Cal Kestis (played by Cameron Monaghan), it takes place five years after Revenge of the Sith. Beginning on a scrapyard of the planet Bracca, where Cal works salvaging Republic and Separatist cargo, the background settings are filled with Star Wars trappings. Discarded parts of battle droids, pieces of clone armor, and even ships fall and crash in the gritty, used-future background. But rather than use this aesthetic for cheap, superficial nostalgia, it’s used to enhance the characters. This is an old place, and the people who live and work here know its history. Cal lives on Bracca in hiding, but he’s not without friends. Brauf (played by J.B. Blanc) is an old hand to Cal. He gives him the old adage that Bracca isn’t a place he wants to stay forever, that he needs to get off the planet and find his destiny.

This is just the beginning of the many under-the-surface callbacks to the core themes of the original Star Wars trilogy, about how someone who comes from nothing can become something. But unlike the protagonists of the films, Cal is not an all-powerful Jedi, and that’s probably why the game can be a tad difficult at times. 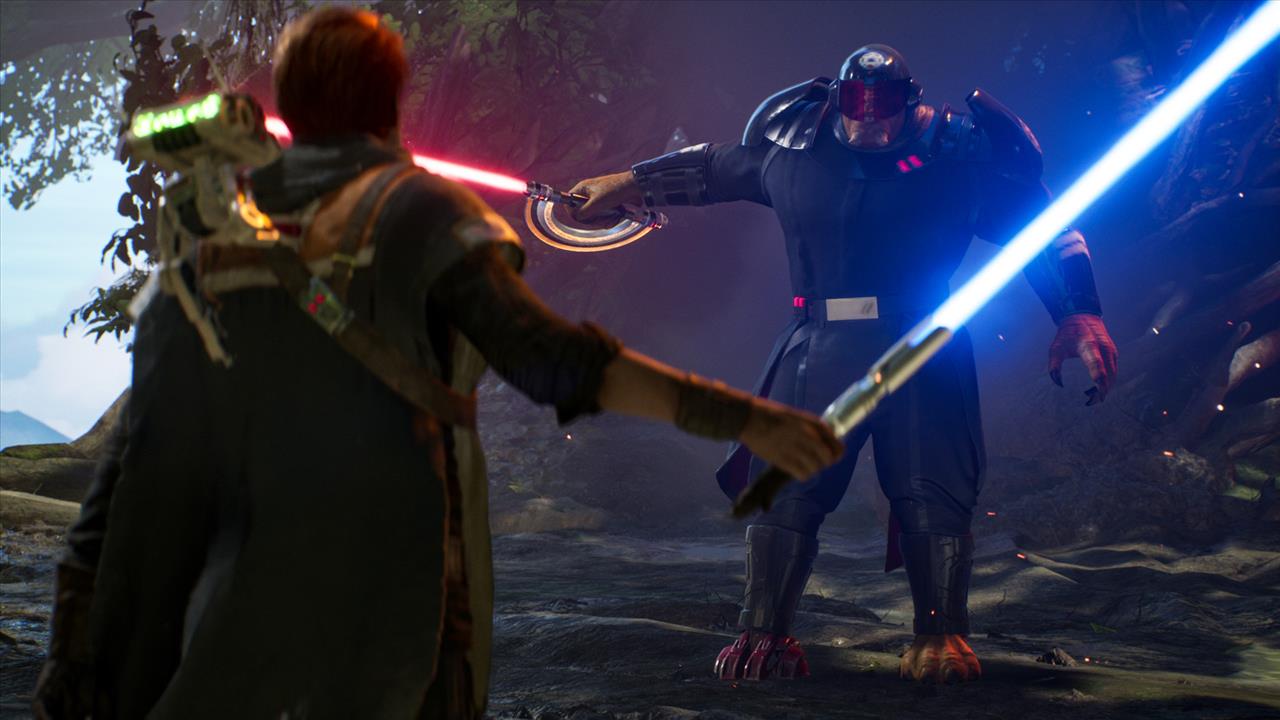 There are probably some comparisons already to Dark Souls and Bloodborne, and I would agree, except whereas I can’t make it past the first level in either of those games, this game’s combat is less of an obstacle to completion than it is a steadily increasing learning curve. I started on Jedi Master, the nearly highest difficulty, and that was probably the most foolish decision I could have made on this game. It resulted in a steady decline of difficulty levels that had me switching from Jedi Knight for regular enemies and the easier Story Mode difficulty for bosses. Cal is not Starkiller from Force Unleashed. His powers are limited and he takes time to get up when he’s knocked down. I really appreciate this, as it echoes the tone of Cal’s continuous struggle. Throughout the game, Cal works to restore his connection to the Force, and his powers grow as a result. He can use Slow, Push, and Pull to get himself out of a bind—and they do what they sound like: pull a trooper in to stab him, push another off a cliff, and slow down a heavy trooper to get a hit in on them. But his Force meter is limited, and it runs out fast. This is where the melee combat comes in.

Although Stormtroopers go down in one hit, melee-focused scout troopers need a bit more work. Using a well-timed parry, players can deflect hard-hitting enemies and take them out. But those are just the basic enemies. There are tons of variants on the Empire troopers, but there are also wild animals, bosses, and other enemies such as Purge troopers, bounty hunters, and more. Each one tests players’ abilities and patience. 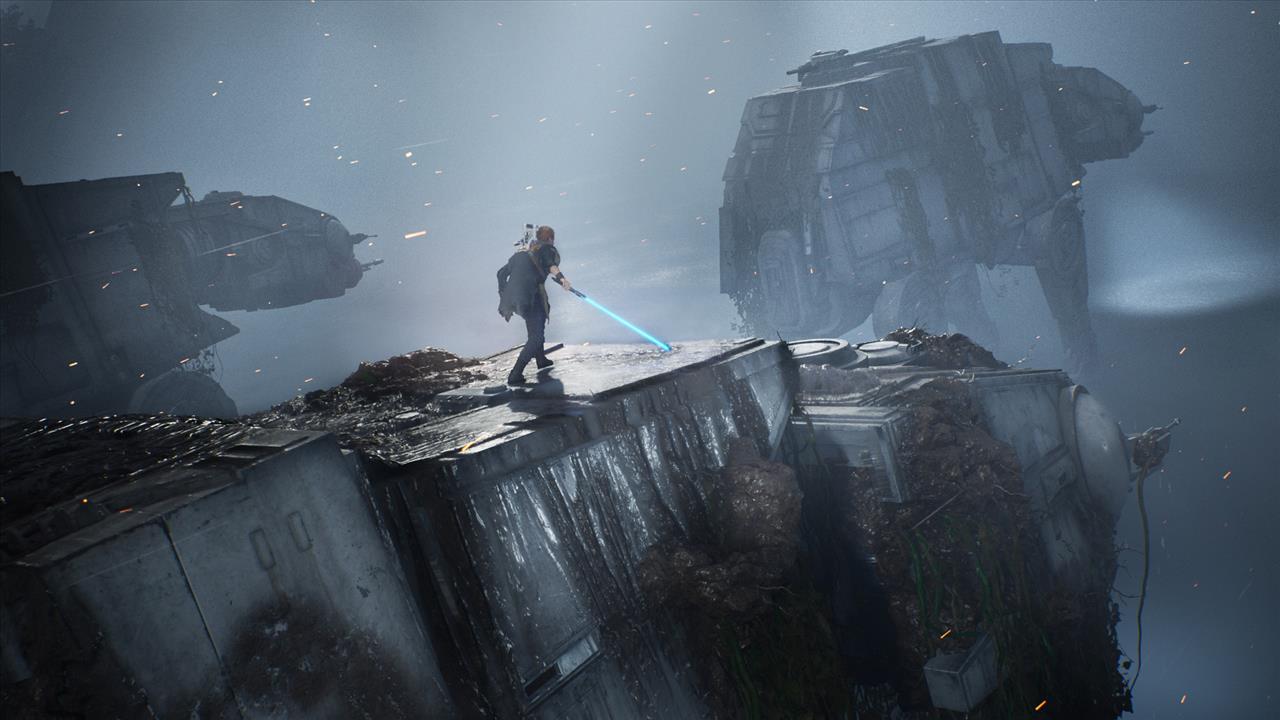 Bounty hunters show up at random, as mini-bosses. Some have jetpacks, others mech suits, and still others have a little shield they can use to charge Cal and knock him over. Cal may not die when defeated by a bounty hunter, so it’s interesting to see how things will play out in each encounter. The Purge troopers are the toughest: wielding dual batons, staffs, power hammers, and rifles, any time they show up, it’s important to be prepared.

Luckily, there are plenty of ways to do so. The leveling system, health packs, and practice are Cal’s best friends. I say this because this game gets tough. Enemies who swarm or restlessly attack can put a wrench in an otherwise extremely rewarding experience. Most of the time, things go all right. Cal can wipe out Stormtroopers in under 30 seconds. But when more advanced enemies come along, that’s when players have to think. 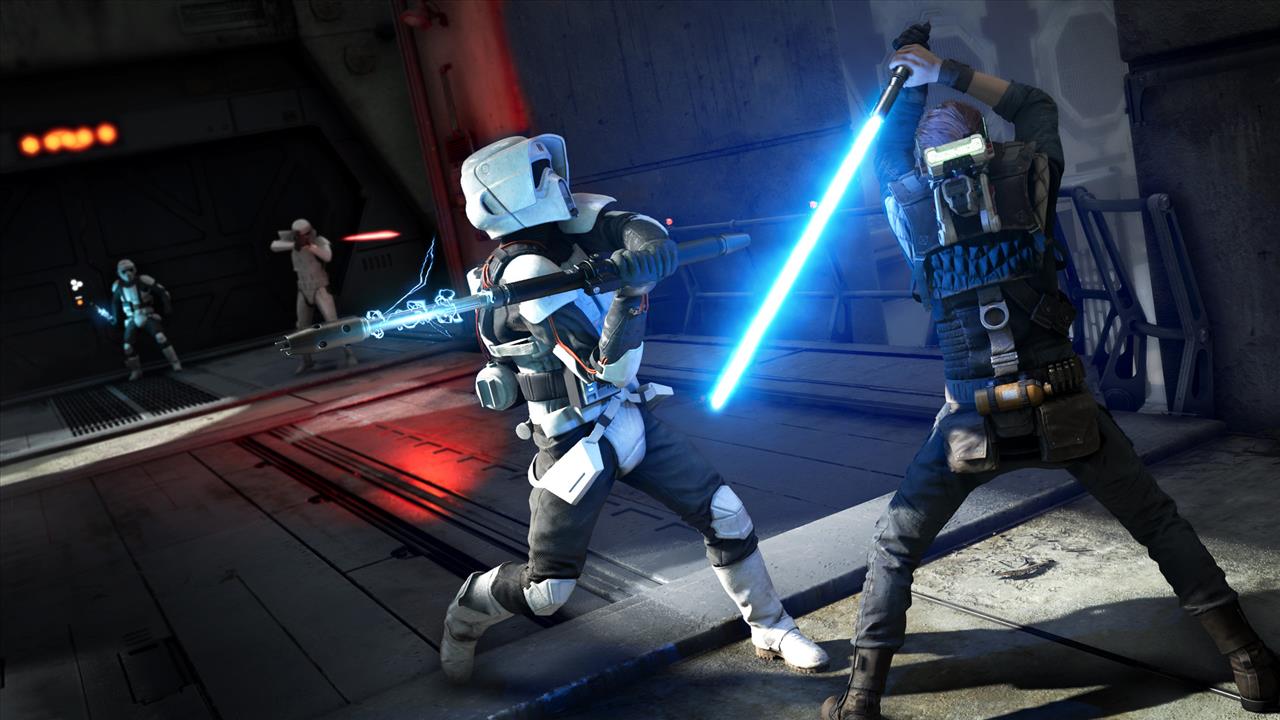 I was exploring an area that didn’t play into the story. I came across Purge troopers wielding batons and a staff, as well as some bounty hunters. The baton trooper is fast, so much so that Cal has to keep a block up and can seldom get a hit in unless he dodge-kicks right before the trooper’s power attack. The staff trooper is slower and a little easier, and can be dispatched a little quicker with dodging.

The bounty hunters required two different play styles. One was a fighter with a shield, the other was in a mech. The fighter required up-close engagement, while the mech had to be kept at a distance until I could circle around. The thing is, they're both trying to kill me. By some miracle I deflected enough blaster bolts to destroy the mech, and subsequently took out the main bounty hunter. 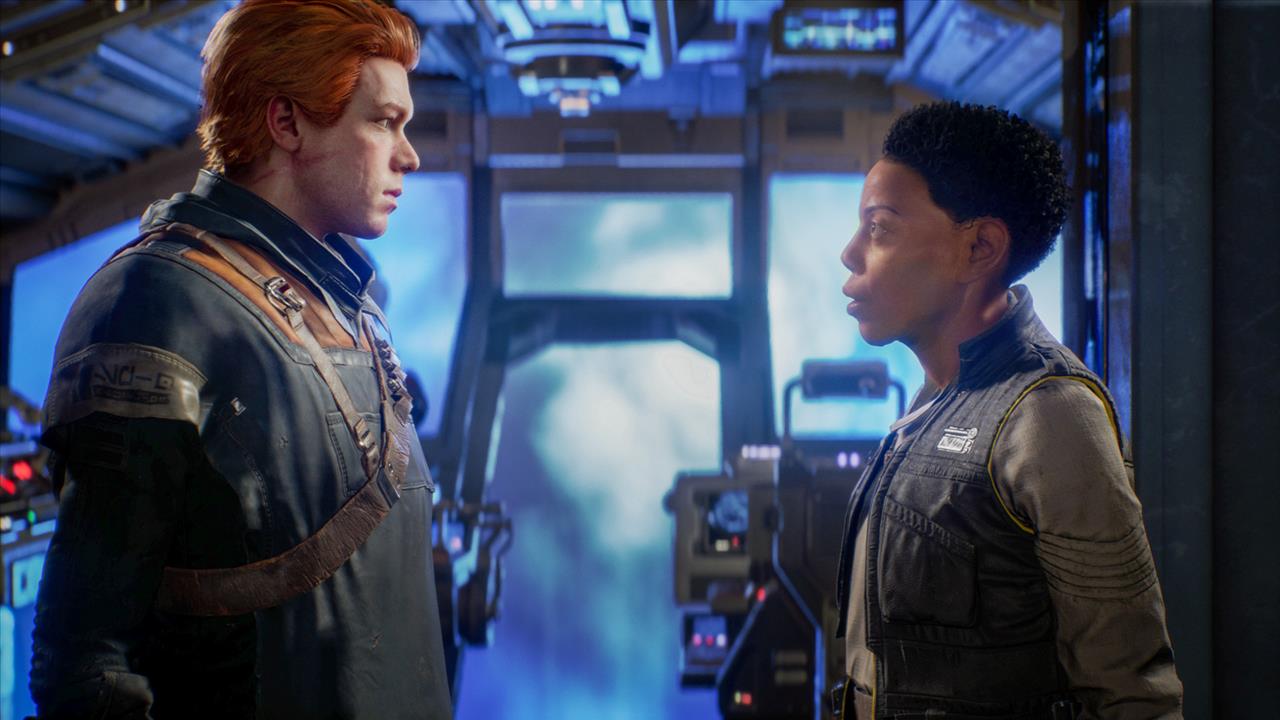 That’s the thing about the regular combat. It’s tough as nails, but players can adapt. The same cannot be said as easily for the boss fights. Fast and brutal, Cal has to be on his toes. The bosses will test a player's will the most. For all except one, I found myself lowering the difficulty to story mode. I’ll definitely be trying the game out again, but it seemed like there was a serious delayed reaction on Cal’s part every time he blocked or got knocked down. Sometimes I got close to defeating them, but then they killed me even after I thought I dodged out of the way—at least that’s what I thought.

But in reward for that is the game’s world and story. Puzzles, places to explore, hidden outfits and pieces to customize Cal’s lightsaber, it’s a whole lot of stuff that rewards exploration. Even now I’m still discovering new things. But what works the best is the story. Cal’s story is one of recovering from trauma. It’s a new examination of Star Wars that comes from a writing team that includes none other than Chris Avellone, the principle writer of Knights of the Old Republic II. He’s not some tough guy who broods alone, giving into his darkness, but rather recovers with the help of his friends: Cere Junda and Greez. The writing here evokes longing for a lost life and a desire for normalcy by people who know they’ll never get it back. Rather, they learn to work together, forming a new life under the harsh new rules. There were plenty of points in the game where I found myself crying with joy—like the first time Cal pulls out his lightsaber to whack a Stormtrooper, or when he learns to live with his past. This is a Star Wars story unlike anything I’ve ever experienced, and it mops the floor with some of the more mediocre films that have come out of the franchise for the past few years. 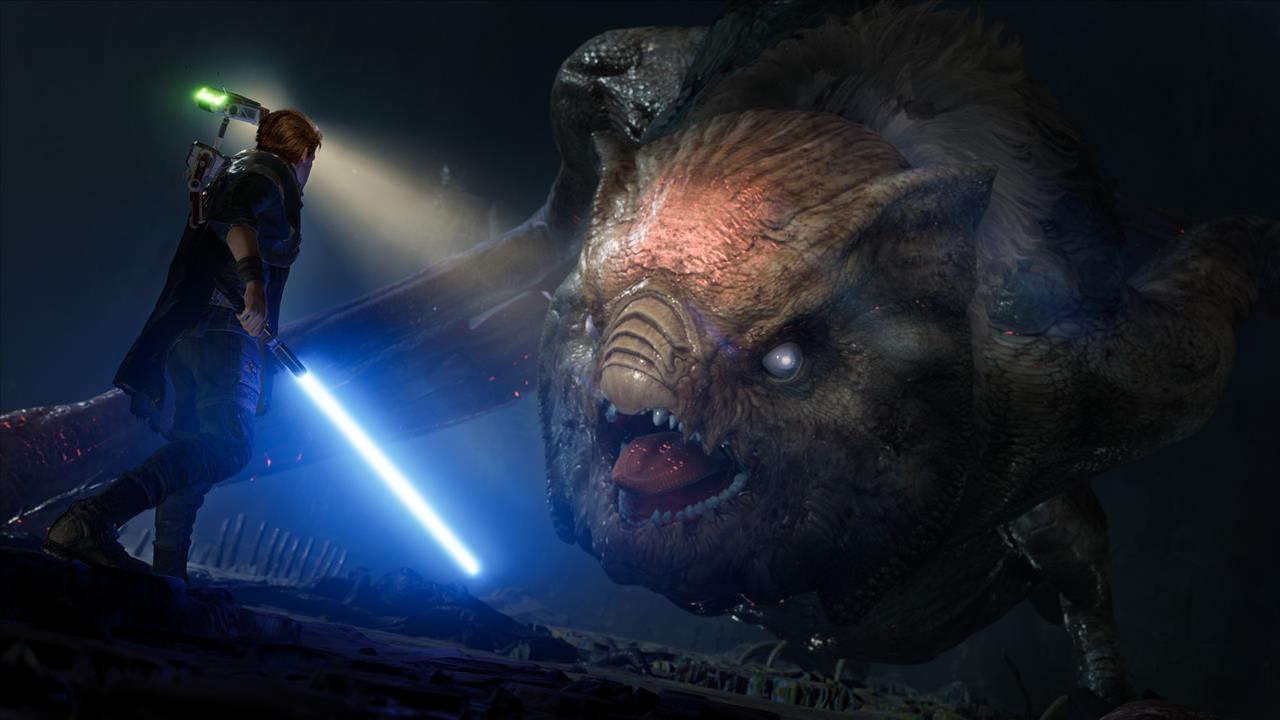 And then, of course, there's BD-1. One of the best parts of the game, the droid is Cal's best friend. BD-1 helps the player unlock doors, chests, scan the environment for lore, and hack droids. They're always with Cal, mounted on his back, and also gets plenty of upgrades to help Cal in his journey. But the best part about BD is how they overcome their own trauma and wounds with Cal. It's amazing how, even though BD is a robot, they're still capable of such human behavior, which is what this game does best.

The only thing is, for as long as the game feels, and as much as it feels is packed in here, I just wish it was longer. The game ends on a solid note, but for all the planets I explored, I couldn’t help but expect a little more when the credits started rolling. Still, it holds its own among the best games in the Star Wars canon, and it proved to be more than I could ever ask for.

This is it, this is the one we've all been waiting for. Here's to hoping that, in the future, whether it's DLC or another installment altogether, that this team from the developers at Respawn can come at this again. I am Nicholas Leon. My nickname is Nick, and it all started when I fired up Super Mario 64. I then moved on to the Zelda series (I beat Wind Waker on my dad's old save file a couple years ago) and other Nintendo products. I then moved on to Microsoft products where I have played the majority of my games.

I got into first-person shooters in middle school, and although my interest in them has subsided over time, there are still plenty of interesting titles in that area. My first foray into online gaming happened in high school with Battlefield 3.

Now, I'm getting more into PC gaming, and I also just bought my first PS4. and own my very first Pokemon game in Moon.

I love intelligent games. That doesn't mean they have to be smart, they just have to know what they are. Action, horror, RPGs, Wii Sports, you name it. I'm always down for new adventures.