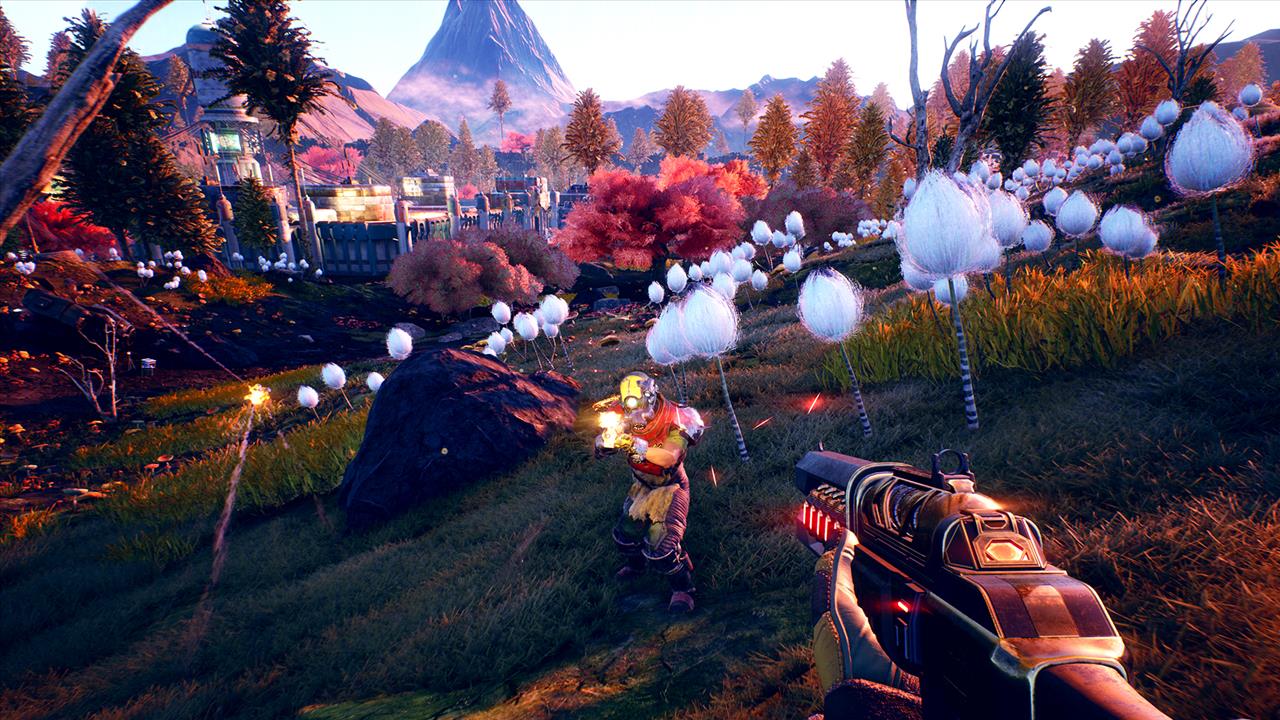 You rarely hear the term “comfort food gaming” thrown around sports titles or annual shooters. But role-playing games fondly earn that title from their audience. Indeed, that’s what The Outer Worlds is: comfort food gaming. While it fills your plate with a lot of the best things to come out of video game RPGs of the last 10 years, sometimes between mouthfuls you’ll think to yourself, “We’re having this again?”

Obsidian’s quirky brand of drama and comedy is in full effect, right from the character creation screen. You aren’t some tried-and-true sci-fi trope, like a colonist that survived their entire colony being wiped out, or a rugged individualist that somehow made it through space army school. In The Outer Worlds, your background is much less glamorous sounding in all the best ways. You were a janitor or a farmer, a food additive taster or sub sous chef.

But that experience still contributes to your stats. Were you a tossball team mascot? Here’s an aptitude bonus to your Inspiration score. If you’d rather put a -3% on shock damage received, consider a former life as a wire spooler doing electrician work on construction sites. It’s all intentionally mundane. Can’t imagine Commander Shepard from Mass Effect touting those credentials. 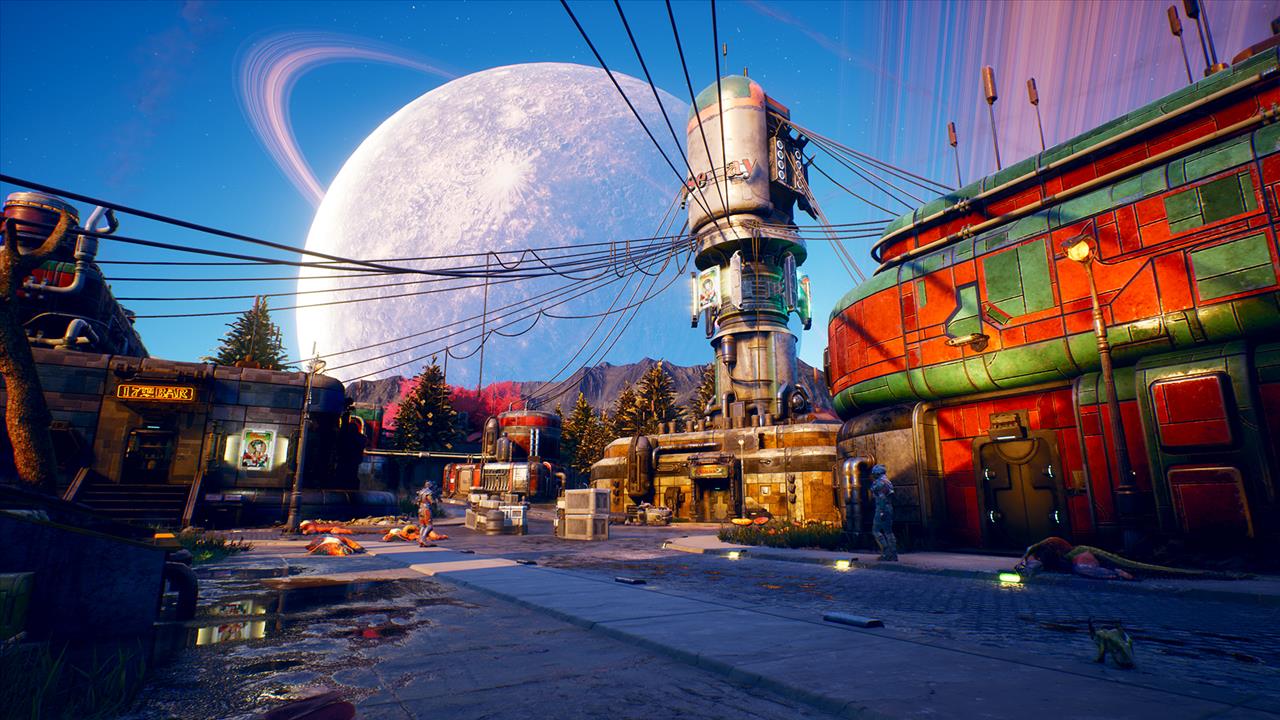 Yes, Obsidian, makers of Fallout: New Vegas, is definitely on brand. You can tell, again, from that character creation screen. That and the Christopher-Walken-as-Dr.-Emmet-Brown-from-Back-to-the-Future character.

In this perfectly boring dystopia, corporations rule the solar system. It’s as if Walmart and Amazon and, I don’t know, Costco each became president of their own little planet, and everybody acts as if they’re all on the clock. At best, the average citizen detects the irony in their own voice as they cough up the company byline. At worst, they’re profiteering off the backs of distressed workers with an “it is what it is” resignation about life.

Your a stranger ‘round these parts, having just been woken up out of cryostasis on a colony ship that’s been lost in space for decades. Just you. And now this Doc Brown character has got it in his noggin that you’re going to Judge Dredd these corporate overlords with your old school values that don’t give a rip about corporate values. Eat the rich! 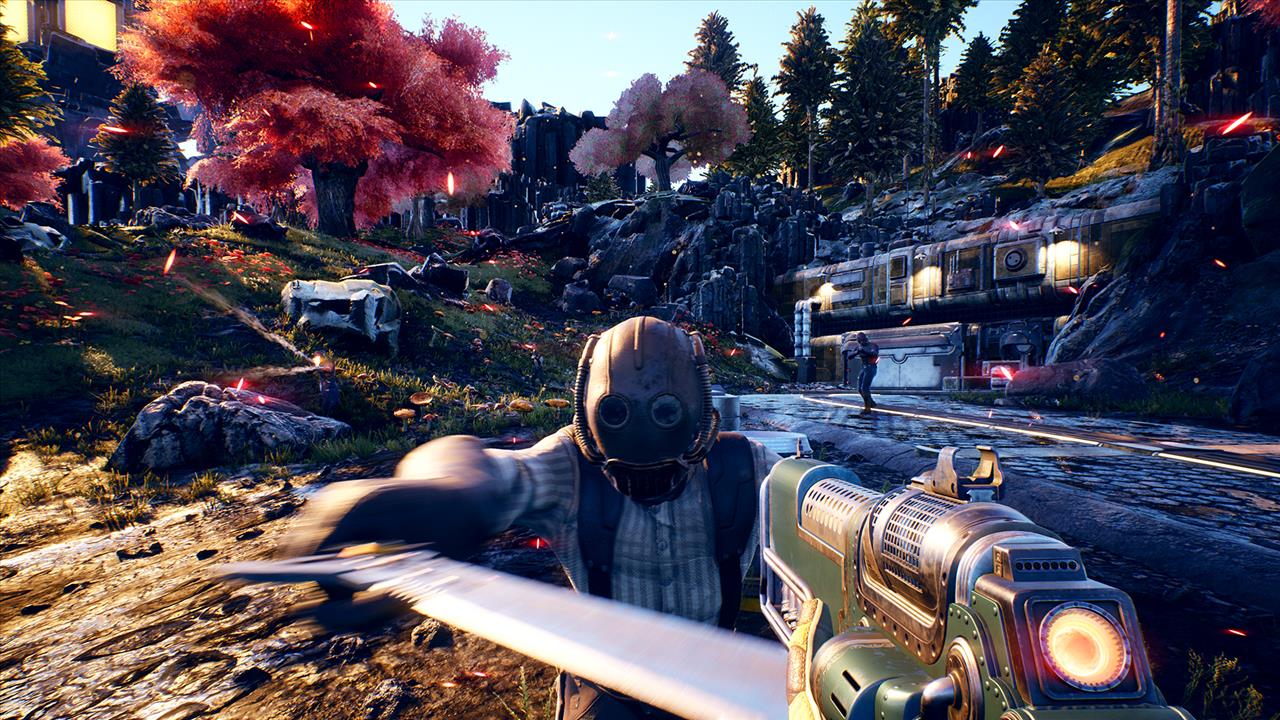 The environments are pretty, in that overbaked Unreal engine kind of way. The art style is less about creating unique-looking scenery and more about cramming the screen with as much stuff as humanly possible. The art style can be...offensive in that way.

After being woken up, you’re welcomed to Edgewater, population: cynical. It’s a swampy town built strictly for corporations and corporate employees. The only environmental storytelling comes from advertisements, the guards take miserable breaks when they’re not harassing employees that are on their breaks. It’s a place where only the best employees receive health care in this meritocracy, but the doctors who treat the best employees can’t make the payments on their own future-grave rentals. 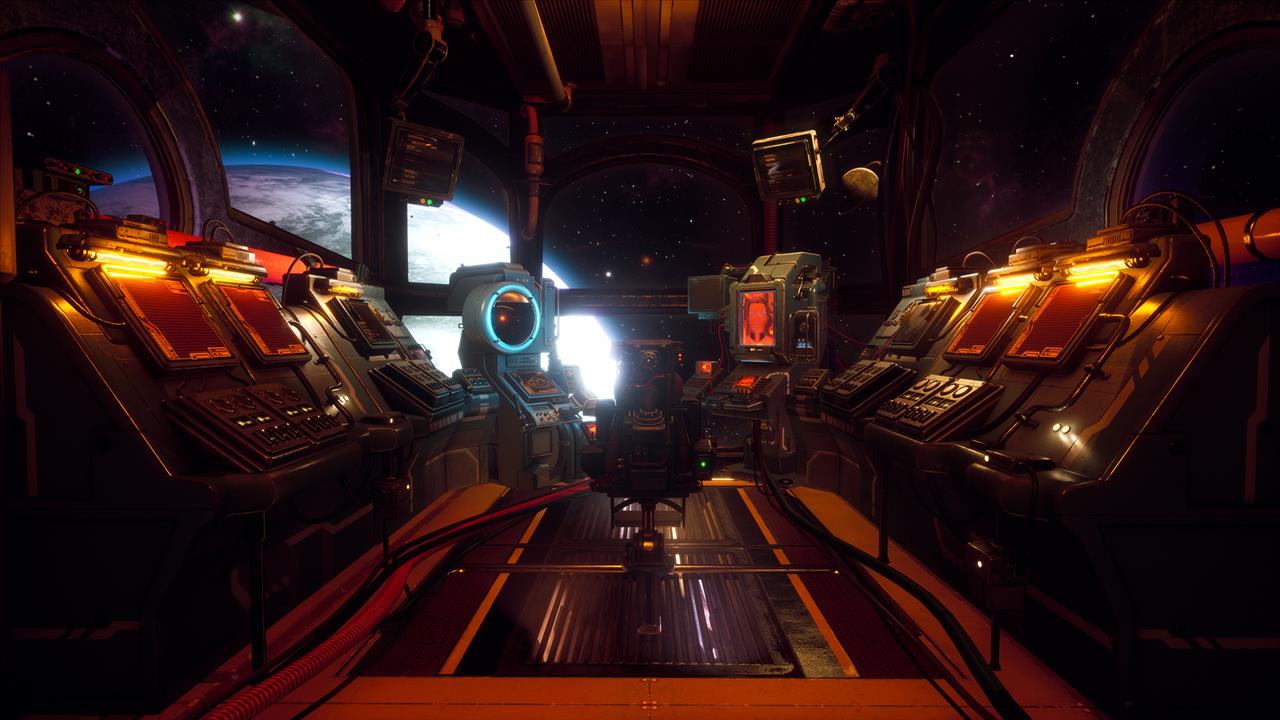 I’ll readily admit, the main story choices you’re asked to make aren’t always easy, and they start you off with a doozy. The brave part wasn’t making the choice I’d made. The brave part was going back to my employer and telling them why I just screwed them over. Whoever said, “Asking for forgiveness is easier than asking for permission,” doesn’t always make the most credible point here.

One green-eyed, green-haired NPC named Esther Blaine made my gameplay morality very clear. She explained why I’d gone from my usual Lawful Neutral kind of playthrough to a more Chaotic Good playthrough. She simply said, “Sometimes you’ve gotta do the wrong thing for the right reasons.” The Outer Worlds makes me feel like I’m always doing the wrong thing. 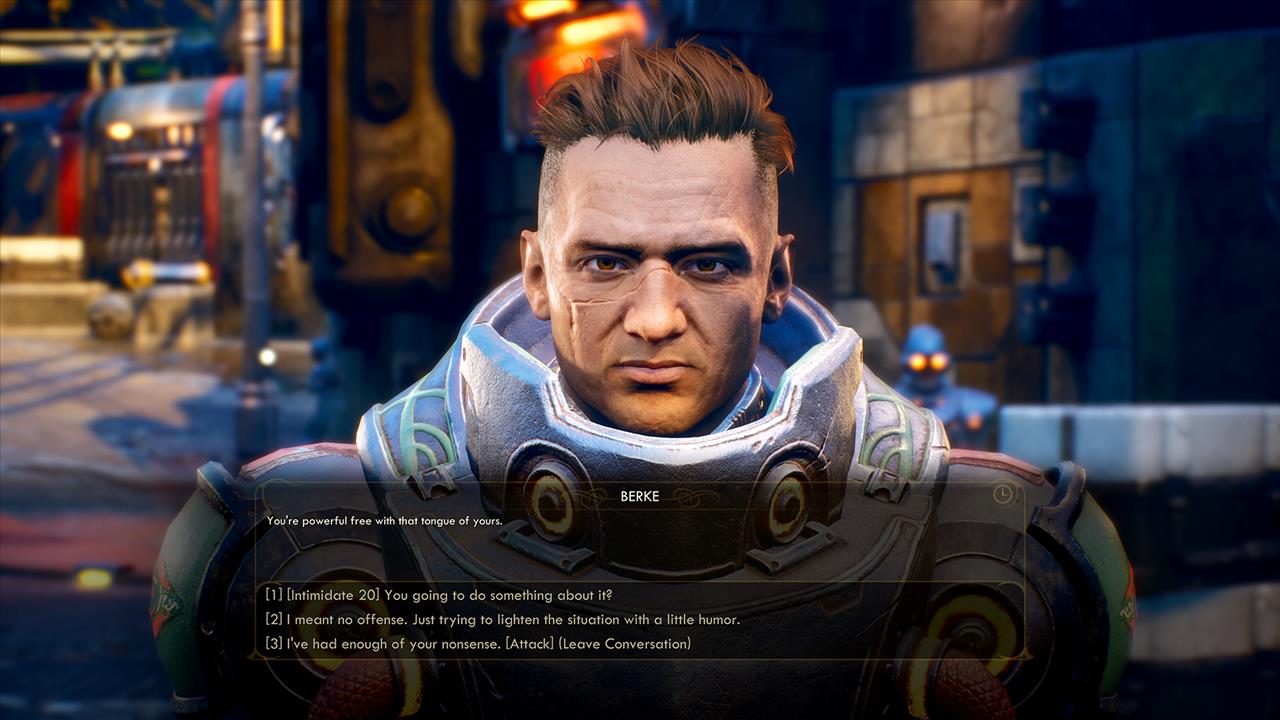 The mechanical nature of the game all slants on the very easy side of things. The looting is fast and furious. You carry bottomless loads of ammunition. You can get a perk letting you fast travel while overencumbered. There’s no end to the shortcuts handed to you if you dislike slow-burn role-playing games. This is one of the most action-oriented RPGs I’ve ever played; or one of the most RPG-oriented action games I’ve ever played. I can’t decide.

The Outer Worlds are made up of the pulpiest science-fiction. Where geothermal plants sip lava through giant straws straight from volcanoes. The maps are intentionally small and entirely unconvincing from a world-building perspective. They only serve players that aren’t terribly interested in traversing maps in the first place. Exploration is rewarded cheaply, where a crate with a few items will be tucked behind this rock or that tree. The worlds feels un-lived in, I don’t care how many “Where do they poop?” toilets in people’s sleeping quarters.

Too much of The Outer Worlds feels all too familiar and done-before. In 2009, this game would’ve blown my mind. In 2019, it feels too late to ride the diesel-punk gravy train, and too soon for a Throwback Thursday celebration of that aesthetic. Everywhere you go feels like a Firefly-BioShock high school reunion. It’s a land of comical violence, with every corpse missing entire limbs, swimming in clay-colored pools of their own blood and viscera.

I liked how my ship’s computer would clue me in on two of my crewmates having an off-topic conversation, for instance, above the cargo bay. I head over, poke my head into the convo, and, most likely, put those two as my wingmen on my next mission together. Nothing made me pair those two together. But quiet storytime elements like those made it impossible not to pair them up.

The next time I’d return to my ship, the ship’s A.I. would tell me about a different couple of teammates she happened to overhear talking. Then I’d walk to them, poke my head into the convo, be just as pleasantly surprised by their conversation, and then let them tag along during my next away mission. It was a great way to get me to mix and match my crew, while earning some Mass Effect-style get-to-know-you time in the process. 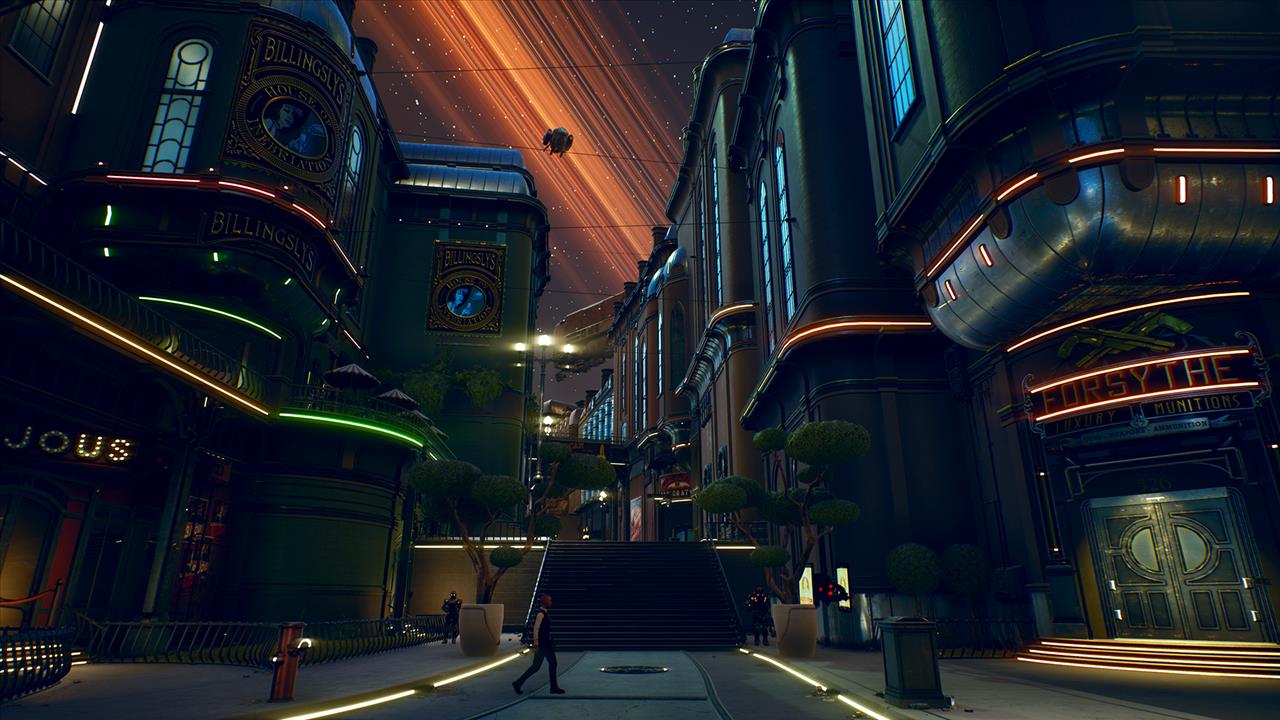 Looting is lazy fun, if you don’t care what you’re getting, because it doesn’t often matter. If you’ve got the encumbrance to spare, then you just pick everything up. It’s Hoover looting. Ollie Ollie Toxifree, Ambidextrine, Tarmac and Cheese. It doesn’t matter. Bypass Shunts, Armor Parts, Mag-Picks? Pick it all up. Don’t even read what it is when you do it. There’s no need to finesse your way through the process. You’re basically just Pac-Man chomping up lines of loot dots. And that’s just fine, as long as you don’t spend too much time reading about it in the menus, menus which are as convoluted as navigating menus with a Pip-Boy in Fallout.

The Outer Worlds is about labor issues: workers and their supervisors, supervisors and their managers, managers and their directors, directors and their owners. Boss fights are mostly just fights with people’s bosses. Worker reforms, right sizing, relocations, corporate loyalty--and the breaking down of those structures. The gameplay is fast, sometimes too fast. The art style is overly busy. The stories are pulpy and a couple of your companions are always worth talking to. Something tells me, though, that I will always be forgetting how good The Outer Worlds is.

Obsidian set out to make a Fallout game, but didn’t think we’d mind if they actually made it a Firefly game along the way. So now we have an anti-capitalist Firefly mired in labor issues but elevated by rapidfire gunplay, peppered with chuckles from a tryhard sense of humor.