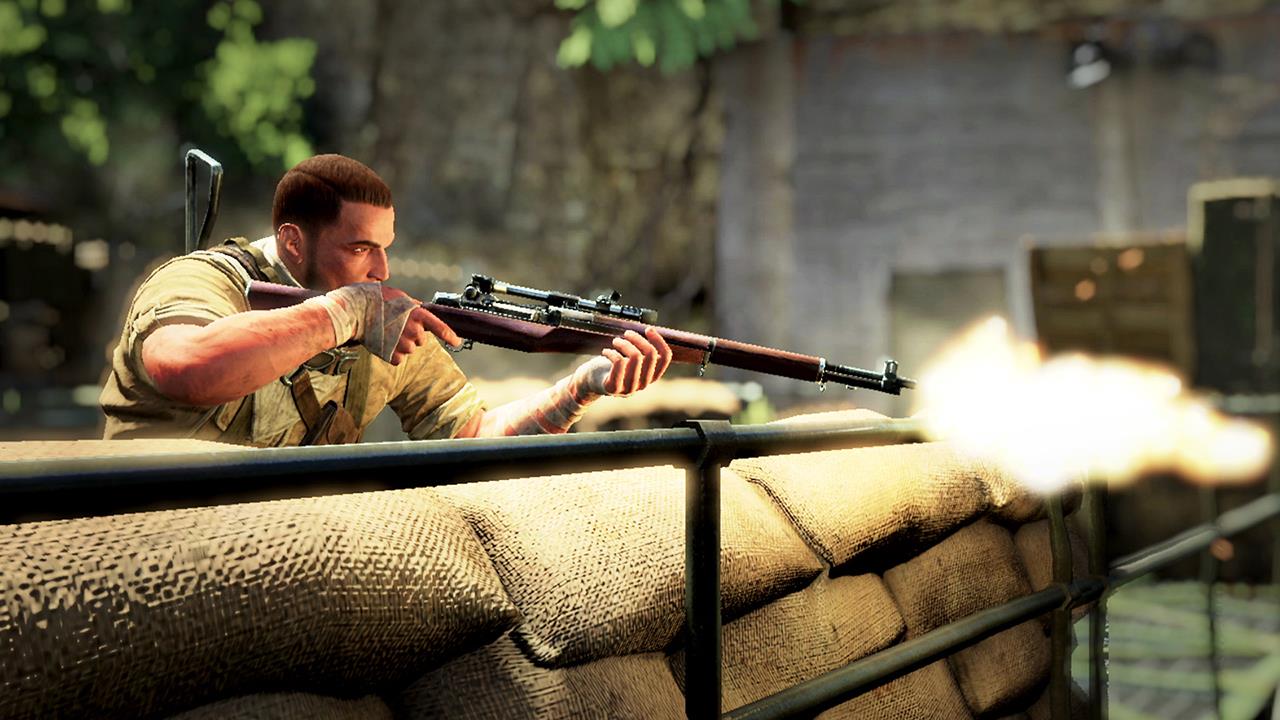 This review is late. I've been busy, sure. Life happens and all, but that's not the reason why this review is late. This review is late because I've never had to actually score a game where what I believe stands in it's way, preventing it from achieving what it should, is both physically and literally outside of the developer's control. So I am at a loss as to how to come up with an accurate scoring for this unique situation, but here's hoping putting my thoughts down on the page will do it for me...

Let's get this out of the way up-front: Sniper Elite 3 is a fantastic game. It originally released back in 2014 on consoles to high and deserved praise. We gave it an 8 in our initial review for PS4 and it was on that system I have already played and completed this game for my own pleasure. It brings in solid sniping mechanics and a well ramping difficulty with a real freedom to play the levels how you wish even though you will always be at a disadvantage if you stray too far form the game's namesake and away from the actual sniping. It's enjoyable; is well balanced; and while the multiplayer had a little too high of a learning curve to really grip me long term, the story and campaign were a real pleasure to complete. Really, if you want to dive into the gameplay and story and all that, then pick up any review about Sniper Elite 3 when it initially released. The game is ported more or less perfectly as far as I can tell and anything anyone wrote there will be more or less accurate for this re-release. Problem is we're not reviewing Sniper Elite 3 here; we're reviewing Sniper Elite 3 Ultimate Edition for the Nintendo Switch. And that last little bit is the rub, because while the actual game is every bit as good as it was 5 years ago, and while it has aged well, for the first time in my relatively short experience with the Switch, it's the hardware that really lets the package down.

I've played action games on Switch like Smash Bros. I've played strategy games like Into the Breach. I've played RPGs like Valkyria Chronicles, and I've played arcade games like Tetris 99. On every occasion thus far, the hardware shines. The screen is brilliant, the processing power never seems to drag on what it's asked to do, and the size is perfect. I can't heap on enough praise about the size of the Switch. If you're a frequent traveller (like I am for business) the the Switch is the next best thing you can buy for yourself after rolling luggage. It tucks away perfectly in and out while waiting for a flight, boarding, or dealing with a cramped seat in coach. On my last flight I couldn't even extend the screen of my laptop to an upright position on the minuscule space provided by the seatback tray, yet could whip out the switch and get lost in Sniper Elite comfortably. 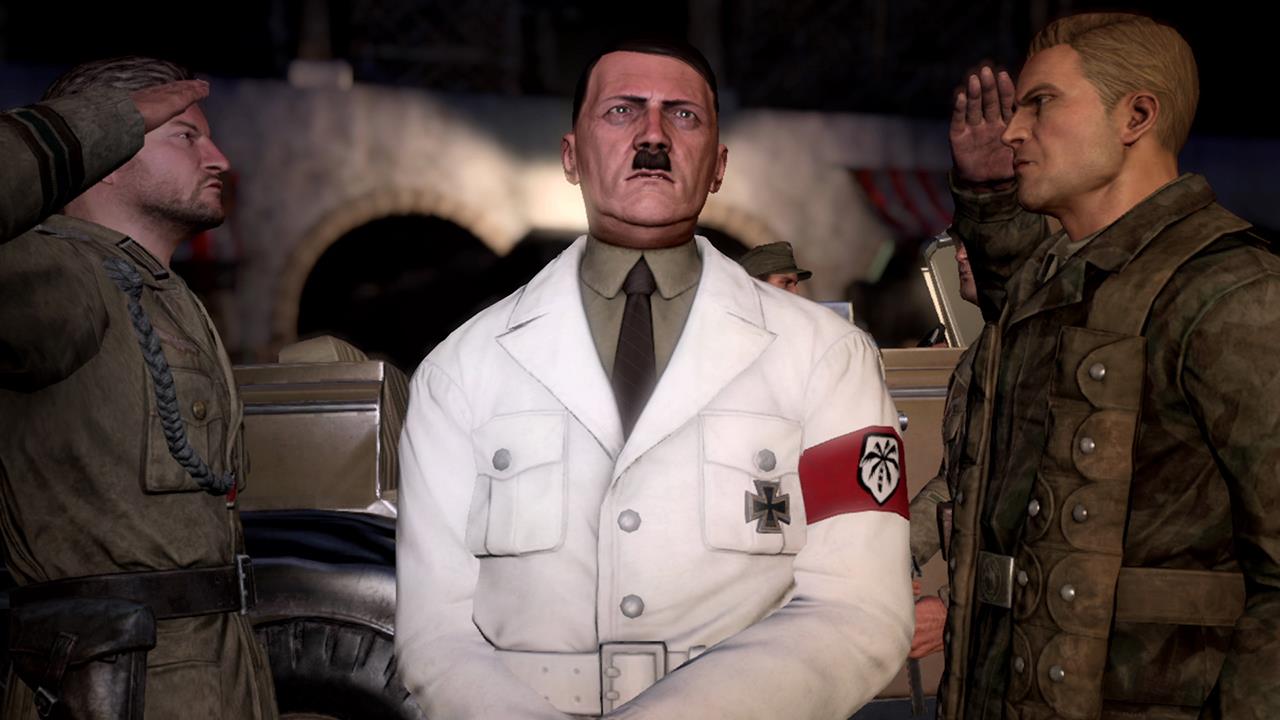 The problems arose after getting lost in the game, because it's that size again that does so much well that ends up tanking this gaming experience when the petite-ness of the Joy-Cons ends up being the crux of the problem. I was simply let down by the controllers, or more precisely, the thumbsticks. I hadn't expected that at all. If anything I went in skeptical about the screen size and if the precise sniping measurements required to line up that killshot were going to translate to a 6.2 inch LCD. Screen size is not an issue, once again the 1280x720 pixel resolution lights up the game gorgeously and details are easy to distinguish on-screen. No, where the hardware fails is both in the analog response and positioning of the thumbsticks themselves. I would struggle a bit trying to make those small adjustments with the floaty thumbsticks on a precise shot, but stubble even more so when trying to make large sweeping motions. Moving a reticle a few inches to ensure my one shot resulted in one kill was mostly ok but always took longer than it would have on a Dualshock. The real frustration though was in the latter, trying to pull out a submachine when my cover was blown and make a quick move to gun down the alerted enemy. There is nothing about the awkward offsetting of the thumbtacks, the squashed positioning of the tiny trigged buttons, or the wide stance of the grip when having the screen wedged between my palms that lends itself to do anything quickly in this game with any semblance of accuracy. If your cover is blown on a mission, better off just hitting the menu screen an re-loading. the last save that actually trying to save yourself in the moment. While in a handheld mode it feels like a contortionist would still struggle to wrap their grip comfortably around the task.

Things do get better when you release the Joy-Cons from their docks and slide them into a Joy-Con Grip. And I would bet things get even sweeter with a Pro Controller which I do not have and therefore was not able to test. But I also am not really all that interested in testing that theory, because while trying to keep things handlheld ends up being more frustration than possibly the game is even worth, for me, that's the only way I really want to play my Switch. I don't want to lug a Grip around in my carry-on, it won't even fit into the nice slim Switch Case I bought for my travels. So what we're left with is a very good game, but one that is forcing me to play my switch like a true console, not a handheld. If that's the case, why not just spin up the game in my PS4 where I already have my console progress and old saves?

And that ultimately becomes the grain of salt that every reader should take this very review with. If you are happy to play Sniper Elite 3 Ultimate for Nintendo Switch as a console experience, you're in for every bit of a treat the game was in 2014, and yes, it has aged well too. However, if you're like me and really want to keep your screentime on Switch to handheld mode, then this ultimately becomes a game I recommend passing on. 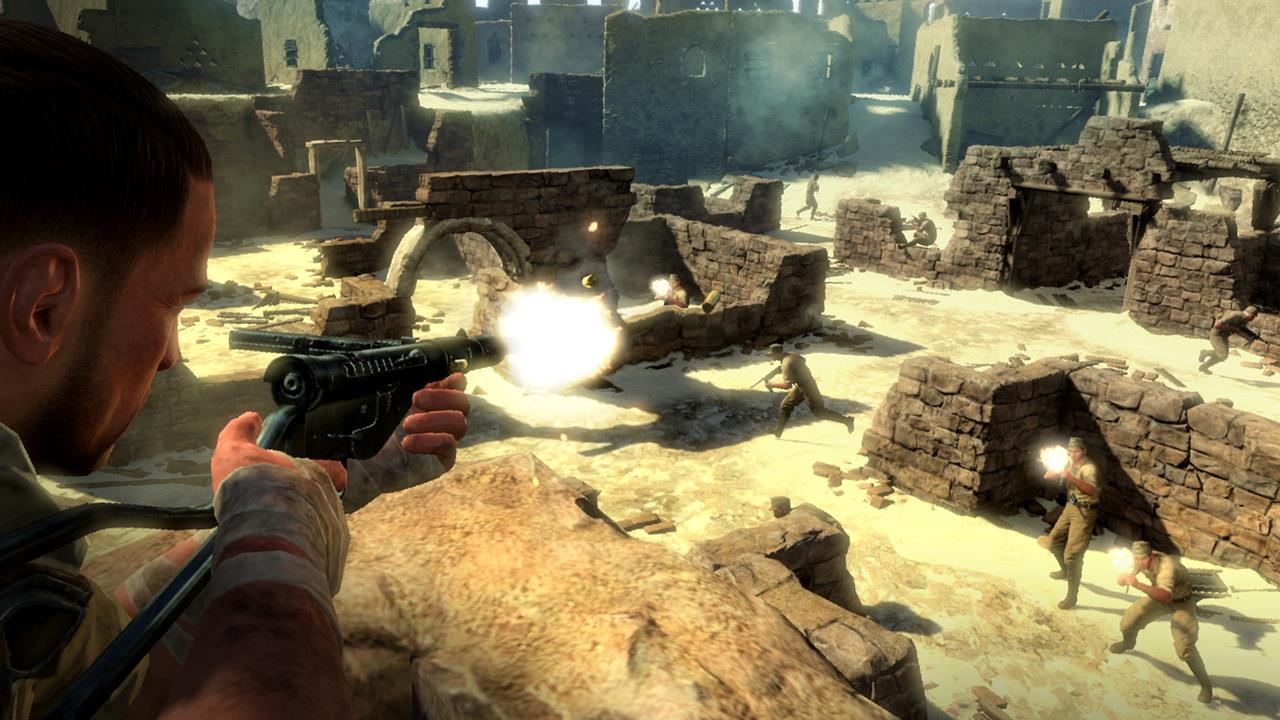 And none of that is the fault of the talented folks over at Rebellion Games who did an excellent job with the port and have a fine piece of software they are offering. I've reviewed bad ports before, mostly PC games where no real thought was made to translate control schemes to consoles. Those are moments when the developers are every bit at fault for not thinking through their design decisions. That is not the case here. Here we have dual joysticks for a 3rd/1st person shooter and there is no reason to try and get clever and work around what every other game in the genre is using as a control scheme and what every gamer would be expecting that control scheme to be. The problem is that the controls themselves, while in handheld mode, are just way too inaccurate to carry the day. As a result I simply found the defining characteristic of playing Sniper Elite 3 as a handheld experience to be, in a word, frustrating. It wasn't a game I was eager to jump back into after I was pulling my hair out on the very first level, and things never seemed to click and get better after that until I pulled the Joy-Cons out, flipped open the kickstand, and started running and gunning with the Joy-Cons slid into a Joy-Con Grip. If that's the experience you're in for, then it will be a satisfying one, but if not...

So in the end, I'm going to settle on a score of Average, 7.0. The game itself probably deserves a Very Good, 8.5. However the handheld experience dips somewhere around a Mediocre, 5.5. The average of those two score would be a 7.0, and I think playing as a Switch console instead of handheld supports that. Because while playing the game on Switch as a Console is fine, it is also an underpowered console compared to an alternative like the PS4, and is also 5 years late. So take that 8.0 from the initial PS4 and dock it a point for being late and running on lesser hardware.

This score is ultimately a reflection of both Sniper Elite 3 Ultimate Edition the game (which is excellent) and the Nintendo Switch hardware (which while also excellent, I found not up to this task when trying to play handheld). The determination here is: if you're happy to play this game with your Switch in console mode, you're in for a grand old time; if you want to keep things handheld, better to try something else. First picked up a game controller when my mother bought an Atari 2600 for my brother and I one fateful Christmas.
Now I'm a Software Developer in my day job who is happy to be a part of the Gaming Nexus team so I can have at least a flimsy excuse for my wife as to why I need to get those 15 more minutes of game time in...