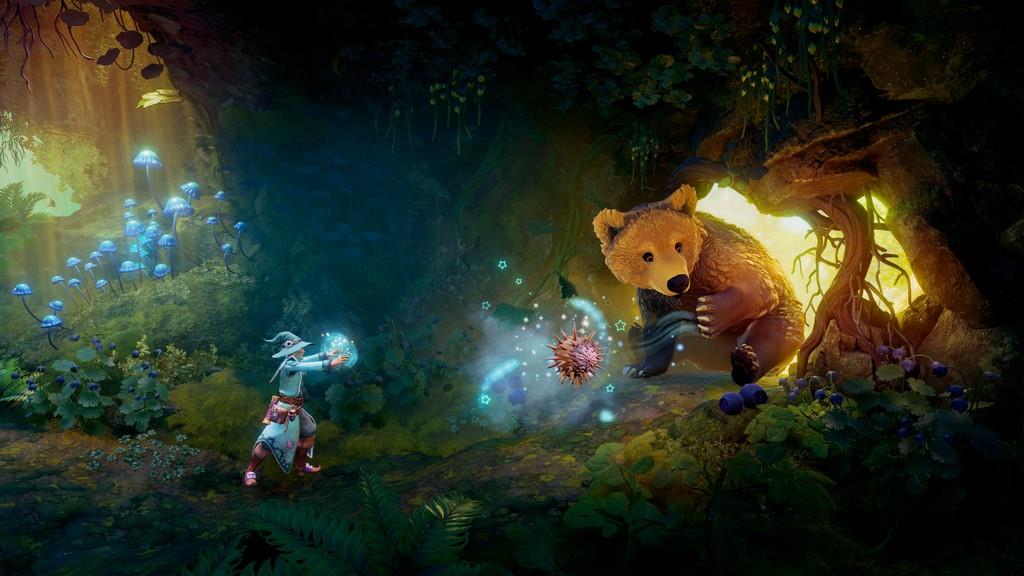 July 2009 saw the launch of the first game in the Trine series, a game about a wizard, a thief, and a knight who touch a magical artifact called the Trine and they all disappear.  The Trine binds their souls together and now only one of them can exist at a time, the other two being trapped in the Trine.  Together they had to save the Astral Academy from an undead menace.  Over the next several years two sequels were created that changed around a couple of the game’s mechanics and Trine 3 added in some 3D exploration.  Now a little over ten years from the release of the first game in the series we have Trine 4: The Nightmare Prince, but can the fourth installment achieve the same success as the prior games?

In Trine 4 Prince Selius has run off from the Academy and Amadeus the Wizard, Zoya the Thief, and Pontius the Knight are tasked with retrieving the young prince.  Along the way, the prince begins to conjure up nightmarish creatures that the heroes must contend with, some of them possibly being from their own nightmares.  The game takes place across five acts with three to four levels in each.  Each level is filled with puzzles to solve using the different abilities of each hero and the occasional fight with some of the nightmarish enemies.  Each of the three characters can be switched between at any time and each has their own health bar.  When the health bar runs out that character will be unavailable for a few moments unless you’re in an enemy encounter.  While there are a couple of obstacles that can damage you, most of the obstacles that can harm you will kill you outright.

If you’re familiar with the previous games there are some differences this time around.  On a quick personal note, I’ve only played the original game and have looked up footage of the third so I do have something to compare this outing to in terms of changes.  For instance, in the past you had a mana bar for each character to perform certain abilities such as Amadeus creating boxes.  Here you have no mana meter and can perform your abilities as often as you wish.  Further more you’d have to find health potions (and mana potions for a couple games) to restore your health and you couldn’t revive any lost characters until you reached a checkpoint, while losing all three characters meant you’d go back to the last checkpoint.  While that last point is still true, losing a character outside of an enemy encounter will only make them unavailable for a few moments.  In fact you can keep them selected and just return to using them once they revive.  Enemy encounters are different though in two ways.  First you don’t encounter enemies out in the wild while solving puzzles; they’re only found in set encounters in most stages.  Second, losing a character in an enemy encounter will leave them out of action until a circular revive meter around them fills up.  Standing over their fallen body will fill the meter faster. 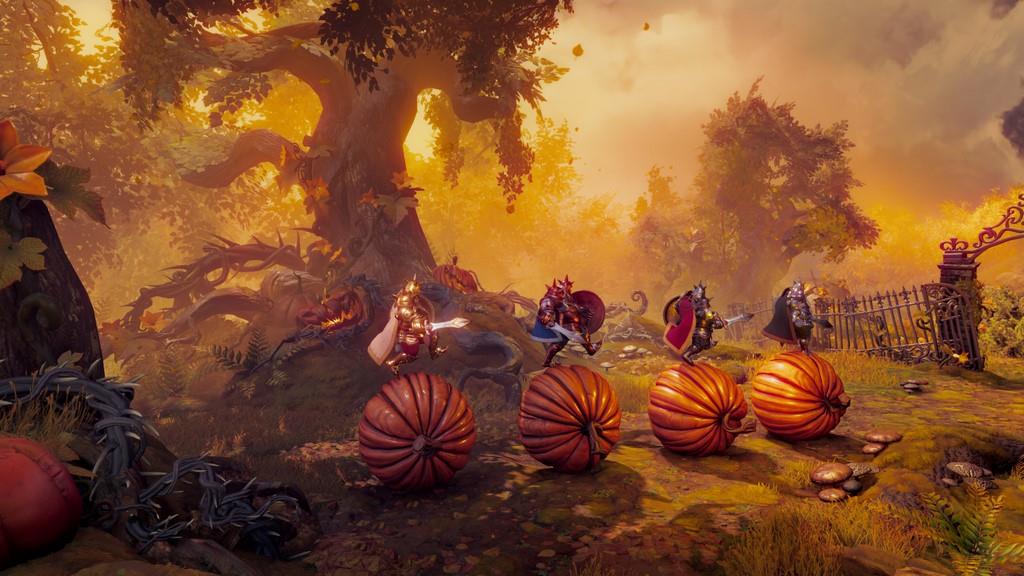 The enemy encounters typically aren’t too difficult once you learn to properly utilize each character’s abilities.  Each one consists usually of either wolves, archers, giant spiders, or a combination of those three.  After defeating all enemies you’ll receive experience points and after so many you’ll unlock a new ability for one of the heroes.  The encounters and the experience earned from them are set so you don’t have to worry about not having enough experience points to unlock an ability, which is nice because you’ll typically unlock a new ability right before having to use it to progress.  The following puzzle or two are typically designed to introduce you to your new ability before beginning to combine it with other abilities.  You’ll also find pink vials throughout each stage and finding so many of these will earn you one skill point you can use to purchase optional skills.  Each skill is usually tied to an ability meaning you have to unlock the ability before you can purchase the skill that goes with it.  If you purchase a skill and either don’t use it too often or just don’t like it, you can refund any skill bought at no cost and assign the points elsewhere.  At no point though are any of the skills required, but they are incredibly helpful.

The puzzles themselves come in two flavors.  The first are very minor as it’s basically just traversing a small gap or something really easy to figure out.  Something like move a bridge or stack a couple of boxes up and climb over.  The other kind of puzzles are the more complicated ones.  These typically take a combination of abilities from the three heroes.  While the puzzles are interesting, only a few made me stop and scratch my head for several minutes.  Most of the simple puzzles will have at least a couple of ways to solve them, typically either the intended way or the “this-shouldn’t-work-but-it-did-anyway” way.  In other words, it’s easy to use your imagination in combination with the heroes’ abilities and skills to come up with a unique and fun way to solve the simpler puzzles.  However, each stage usually has at least one puzzle where there’s only one solution and, depending on how far into the game you are, can be incredibly complex and might involve a technique you didn’t even know you could do. 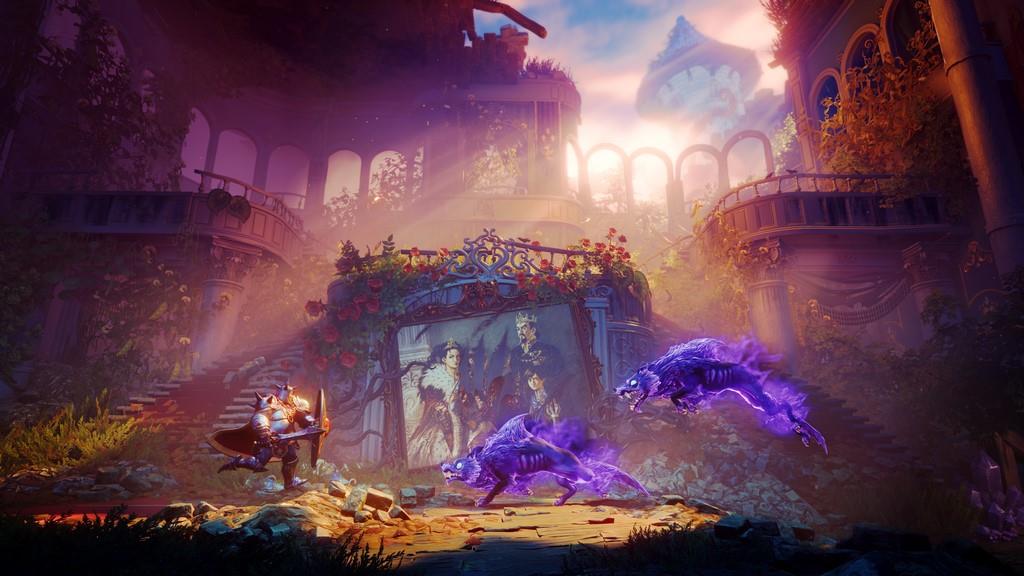 I mentioned that most of the puzzles are pretty simple.  In fact, most of the game is kind of on the easy side as I really didn’t have too many issues with the puzzles and only twice did I lose all three heroes in an encounter, and none of those were in the boss encounters.  Yes, believe it or not there are boss encounters in this puzzle-adventure game.  At the end of Act 2 onwards you’ll have a boss encounter (well technically Act 2 isn’t a “boss” per se, but I won’t spoil it as it contains story elements), but once you understand how the bosses operate they’re pretty simple.  In fact, the final boss is probably the easiest of them as long as you have each character’s dodge-type ability unlocked to dodge attacks.  There were also a few puzzles that had me actually racking my brain for a good while including one that took me nearly forty-five minutes to figure out.  The only reason it did goes back to what I said about the game requiring you to do something you didn’t know you could do.  The big tip I can give for any puzzle is to not overthink it.  I had the tendency to think way to hard to figure something out when I could have made things much simpler.  Maybe freeze something with an ice arrow from Zoya or stack objects differently with Amadeus.

Honestly that’s probably my biggest issue with Trine 4; it is kind of easy.  Another possible issue some may have is that it’s kind of more of the same as the previous games.  You have the same three heroes and they have the same abilities.  Trine 3 even went the 3D movement route as, at least from the footage I saw, you had some 3D movement in stages as you could not only move left and right, but forward and backwards if that makes any sense.  People have said that Trine 3 was pretty short, but Trine 4 is a decent length as I put several hours into it, a lot of those just exploring each stage trying to find any hidden objects and skill point vials lying around.  You can also play local and online multiplayer and the game has stages crafted towards multiplayer.  You can also play single and multiplayer in two modes: Classic and Unlimited.  Classic is your standard Trine fair where up to three players can play co-op but only one of each hero can be used at a time, whereas in Unlimited each player can swap between any hero as they wish, meaning you can have the same hero on screen by more than one player.  I tried online multiplayer with someone who started in Classic Mode and aside from a slight delay when swapping characters or using abilities, it went pretty smoothly.

Trine 4 is fun and in a way kind of relaxing since not a lot of the puzzles are too challenging, though that kind of is my biggest complaint about the game.  In fact there’s an easy difficulty (the other option is the default Normal) and an option to turn on an assist mode after either two or six minutes of being stuck on a puzzle (the default option is to never assist the player), making the game even easier.  However, experienced Trine players should have no problems completing the game while newer players might have a bit more difficult time with some areas of the game.  While thirty dollars may seem a bit high for some, I still think it’s worth the price,and for twenty dollars more you can get all four games in the series.  If you like puzzle games that aren’t too difficult or taxing on the brain, Trine 4 is an enjoyable outing.

After not playing a Trine game since the original, playing Trine 4: The Nightmare Prince makes me want to play through the first three games.  The biggest issue I had was the difficulty as it was kind of simple for a lot of the game and even the boss battles weren’t too complex.  Trine veterans should have no problems clearing the game and newcomers will find a couple of options that can aid them if need be, and online multiplayer worked pretty well with two people.  Whether you’re experienced with the series or if this is your first time, Trine 4 is a simple and relaxing puzzle-solving adventure that anyone can enjoy. I began my lifelong love of gaming at an early age with my parent's Atari 2600.  Living in the small town that I did arcades were pretty much non-existent so I had to settle for the less than stellar ports on the Atari 2600, but for a young kid my age it was the perfect past time, giving me something to do before Boy Scout meetings, after school, whenever I had the time and my parents weren't watching anything on TV.  I recall seeing Super Mario Bros. played on the NES at that young age and it was something I really wanted.  Come Christmas of 1988 (if I recall) Santa brought the family an NES with Super Mario Bros./Duck Hunt and I've been hooked ever since.

Over 25 years from the first time I picked up an Atari joystick and I'm more hooked on gaming than I ever have been.  If you name a system, classics to moderns, there's a good chance I've not only played it, but own it.  My collection of systems spans multiple decades, from the Odyssey 2, Atari 2600, and Colecovision, to the NES, Sega Genesis, and Panasonic 3DO, to more modern systems such as the Xbox and Wii, and multiple systems in between as well as multiple handhelds.  As much as I consider myself a gamer I'm also a game collector.  I love collecting the older systems not only to collect but to play (I even own and still play a Virtual Boy from time to time).  I hope to bring those multiple decades of gaming experience to my time here at Gaming Nexus in some fashion.

In my spare time I like to write computer programs using VB.NET (currently learning C# as well) as well as create review videos and other gaming projects over on YouTube.  I know it does seem like I have a lot on my plate now with the addition of Gaming Nexus to my gaming portfolio, but that's one more challenge I'm willing to overcome.
View Profile