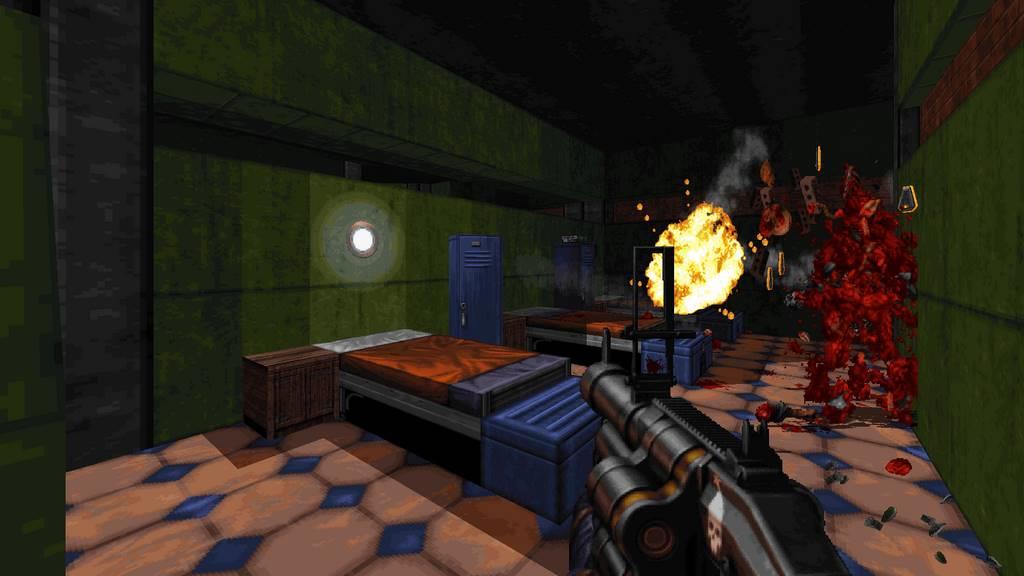 I had a smile on my face the entire time I was playing Ion Maiden Fury. As soon as the game started and I saw the classic graphics, I felt like a kid again. I immediately started running around the map, circle straffing enemies, dodging their attacks while trying to find as much ammo and health as I could all while immediately getting hooked on the soundtrack. As someone that played a lot of classic Doom and Duke Nukem 3D when I was a kid, I felt right at home playing Ion Fury and instantly fell in love. It's not just nostalgia either. There is a reason why classic Doom and Duke Nukem still has a huge community today with thousands of Wads (user created levels) that you can play. It's because these kinds of games still hold up today and despite running on a 20 year old engine, Ion Fury is one of the best games of 2019.

If you played Duke Nukem 3D back in the 90's you should be right at home with this game. This time around you aren't playing as Duke but rather the equally as arrogant and wisecracking Shelly "Bombshell" Harrison. Shelly is part of the bomb disposal department in Neo DC and needs to track down and take out a cult led by Doctor Heskel. With these kinds of games you pretty much need to only employ a single strategy. Move or die. You aren't going to be running in and out of cover and this isn't like current FPS or third person shooter games where you go down a linear hallway and then enter a large arena with cover everywhere. Enemies can be around any corner and they are relentless and are always zeroed in on where you are standing. If you stand still, you will be shredded and will die in seconds. You need to learn the enemy patters and how they attack.

There are numerous enemies in the game with various weapons. Thankfully each enemy in the game is easily recognizable due to their color schemes. If you see the enemies wearing the red robes, move or find cover immediately as they will shoot a crossbow at you that will pretty much kill you instantly if they land a direct hit. If you see enemies dressed in black, they will have grenade launchers. Keep your distance. You need to be aware of your surroundings at all times as enemies will try to ambush you as well. You could go through a clear out of a room of enemies enter another room, go back and more enemies are there waiting to mow you down. 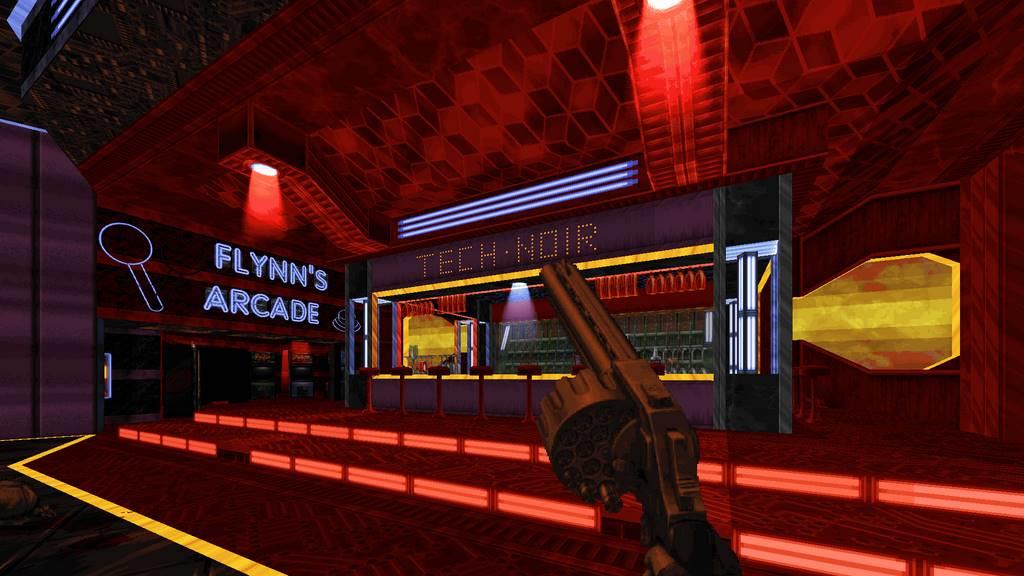 This is not a linear game. Each map is the game contains large open areas that you must explore in order to proceed. These kinds of games It's also easy to get lost on these levels as well. You can pull up a map to see the areas where you have been but there is also a lot of backtracking involved in the game as well to the point where I would almost call this game a puzzle game as each level is pretty much a giant maze. At the start of the level you may find a door that needs a red keycard to enter. Well you may not get that keycard until 20 minutes later after you have been through tons of different rooms and end up on the other side of the map.

Maps this big encourages exploring. There are tons of secrets in each map as well that will give you lots of goodies from health, armor, guns and ammo if you find them. Some secrets can be pretty easy to find as you may find a small air vent that you can crawl through to get into a secret room. That said there are a lot more that are incredibly difficult to find. In one level I found a room that was an armory full of ammo and health that I was in desperate need of. I searched high and low and for the life of me I could not find a way into the room. Then there was another level where I thought I had found a ton of secrets and before I got to the exit the game told me there was 8 more secrets in the level. Sometimes even switches you need to open doors or passage ways to get to new areas are hidden and there is some platforming you will need to do as well to get to other areas. Thankfully, the platforming isn't bad and doesn't require a lot of trial and error. If anything, this entourages multiple playthroughs as do the difficulty levels in the game as well. Higher difficulties mean that more enemies will appear and they will deal more damage. Thank god for the quick save feature because even on the normal difficulty settings, enemies will drain your health with only a few shots. The good thing is that some enemies will drop small vials of health on death. 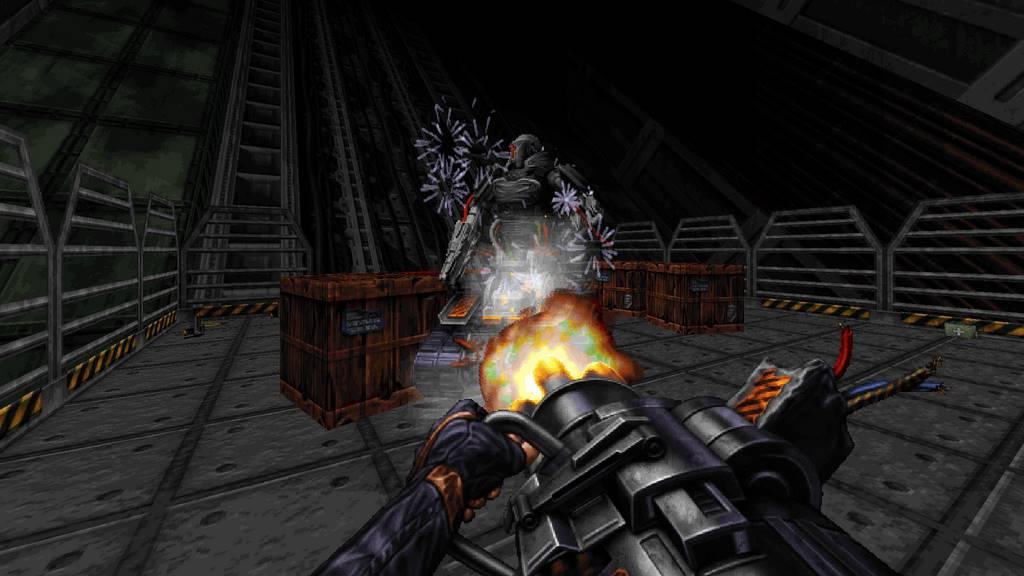 Of course you have a number of weapons at your disposal as well including a revolver called "loverboy", shotguns, machine guns, a cross bow, proximity mines and a grenade like weapon called the "bowling bomb" a ball which you can roll into an area and will explode on contact with an enemy. A lot of the weapons in the game have alternate fire modes as well. The loverboy can lock onto targets and can insta-headshot enemies like McCree's ultimate from Overwatch. The shotgun can also utilize grenade rounds, the machine gun can dual wield, the bowling bombs can be lit so they explode after 5 seconds and the cross bow can launch multiple shots at once. You will find yourself constantly pressing the number keys, constantly swapping between weapons as you enter a new room and encounter a new group of enemies. It's a beautiful dance of death as you dodge enemy attacks and strafe around enemies as you swap to the weapon that best suits the situation and this type of gameplay is what makes this game a ton of fun. 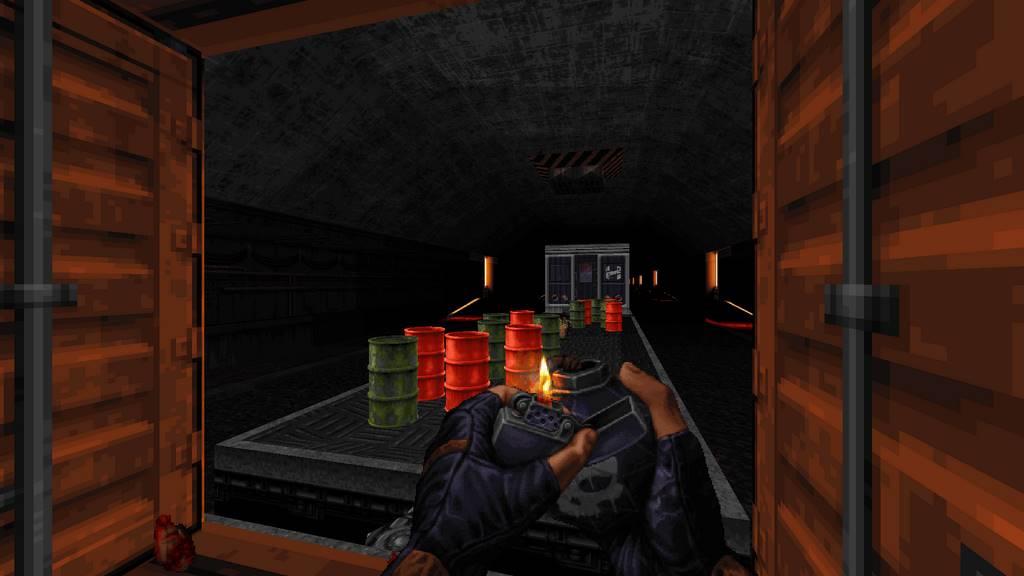 My only complaints really about the game would be that some of the deaths feel pretty cheap, especially those tiny spider monsters that pop up out of nowhere, can swarm you and drain your health quickly. Like I said before some of the enemies can deal huge amounts of damage and even on the normal difficulty I would sigh every time I got Shelly up to full health and armor only to drop down to 20% health after only being hit a few times. That said, that's my own fault. If you get hit, it's pretty much your fault. Most of the time anyways. Shelly herself is a pretty badass character but there are times when she can get pretty obnoxious. She's like the female version of Duke Nukem so you will often hear her shouting off at the mouth constantly after killing enemies. It was funny at first, but about halfway through the game, it can get annoying hearing the same phrases over and over again.

Ion Fury is a joy to play. This isn't a game that is utilizing a classic '90s FPS look and feel simply for nostalgia or to play homage to a genre of games. This is pretty much a brand new game from 3D Realms utilizing the Build engine to create a game that doesn't rely on nostalgia to sell copies. These types of games, especially ones with the Build engine aren't primitive at all by today's standards unless you are talking graphically. It's not something that people are going to play for five minutes and go "oh yeah I remember this" and never touch it again. Not only is Ion Fury a fantastic FPS game, it's one of 2019's best games period.

Ion Fury made me feel like a kid again and it's not just nostalgia that makes the game great. The is classic run and gun FPS action at it's purest and despite running on 20 year old tech, it's still a hell of a lot of fun and is one of my favorite games of 2019 so far.