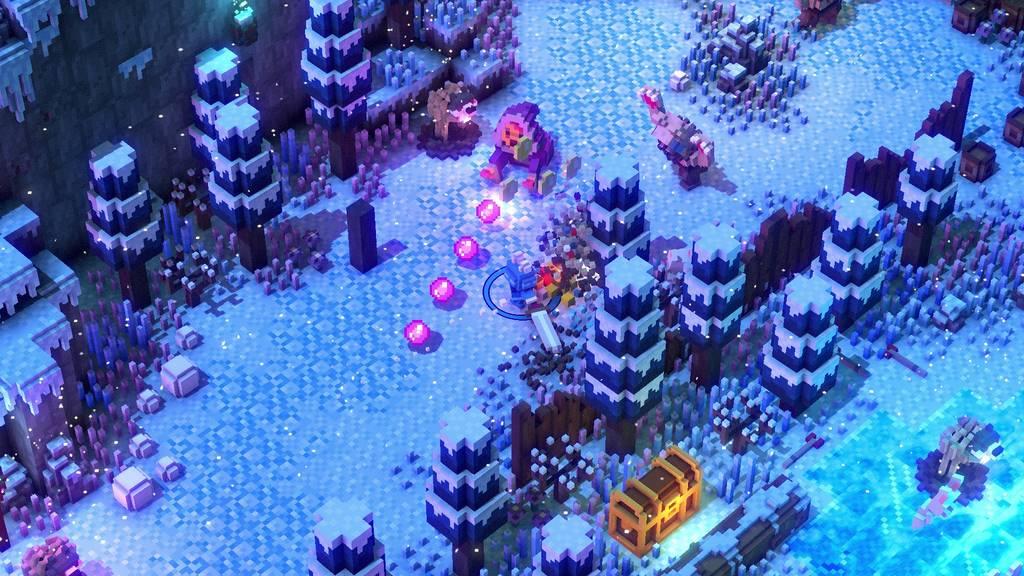 Written by Carter Kilmann on 7/1/2019 for XBO
More On: Riverbond

Riverbond is a voxel adventure game produced by Cococucumber that feels like an amalgamation of Minecraft, Lego, and Legend of Zelda.  If Riverbond excels at anything, it’s the vibrant color schemes and pleasing environments each level has to offer.  Its simplicity is satisfying and elicits a calming sensation (aside from when bad guys are trying to kill you).

Riverbond’s campaign is episodic and non-serial, consisting of eight levels with different themes, varieties of opponents, and final bosses.  To be honest, I didn’t realize there was even a remote connection between missions until the final level.  Emphasis on remote.  Upon completion, it’s apparent that the final level is intended to be played last and there is somewhat of a progression to reach that point.  But you could play through the levels in any order and grasp all you would really need to.

As I said, Riverbond doesn’t take much thought and can be picked up without much difficulty.  There’s even a quick tutorial that only takes a few minutes and covers all the controls – which are basic to begin with.

Objectives are pretty standard – activate X number of artifacts, find keys, kill all enemies, destroy X number of objects, etc.  These ultimately lead us to each of the final bosses, which possess unique combat abilities and are accompanied by a mass of smaller foes (who aren’t required to be eliminated - FYI). 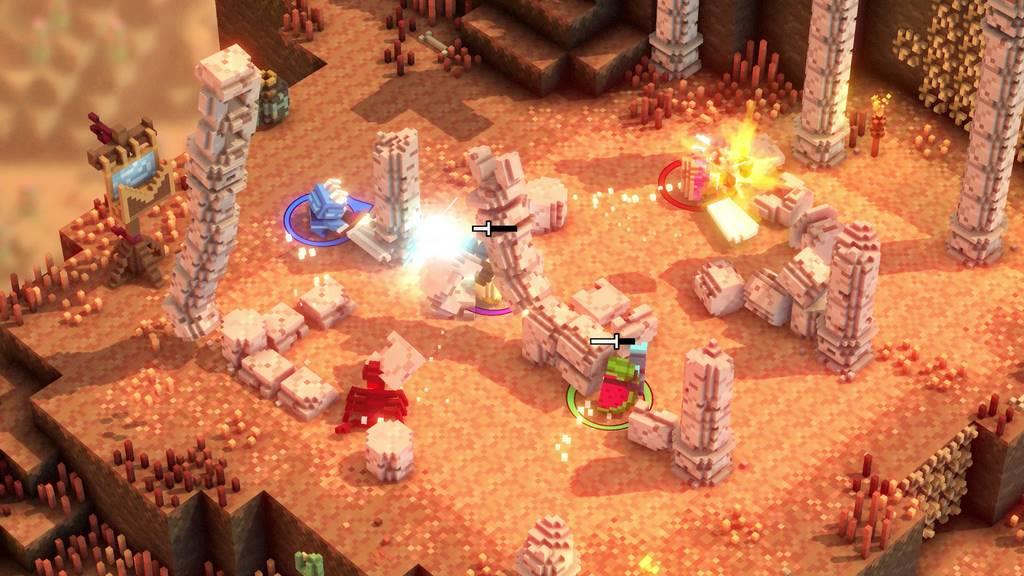 Our hero is a bit of a mystery – lacking any sort of background – and dons many appearances.  At the beginning of each level or at the checkpoints within missions, we’re granted the option to change character skins, including to that of a Panda, Banana, Robot, Knight, Cherries, Donut, and many, many more.  Skins do not serve functional advantages – they really just add to the entertainment value (e.g. a piece of bacon boxing a pig – c’mon, that’s funny).

In addition to a slew of character skins, Riverbond also boasts 50+ traditional and not-so-traditional weapons, from maces and swords to pencils and umbrellas.  Plus, in this world, just about everything is destructible – which is always a plus for hack-and-slash games.

At the start of each level, we’re equipped with the basics: a medieval sword and a ray gun (a natural pairing).  These get the job done – actually the ray gun’s firing speed makes it pretty lethal – but they get old pretty quickly.  Additional weapons are found in tactfully placed chests – some in natural, easily-accessible points, others require you to do a little searching.  As you progress through each level, you’ll find that new-found weapons become increasingly useful. 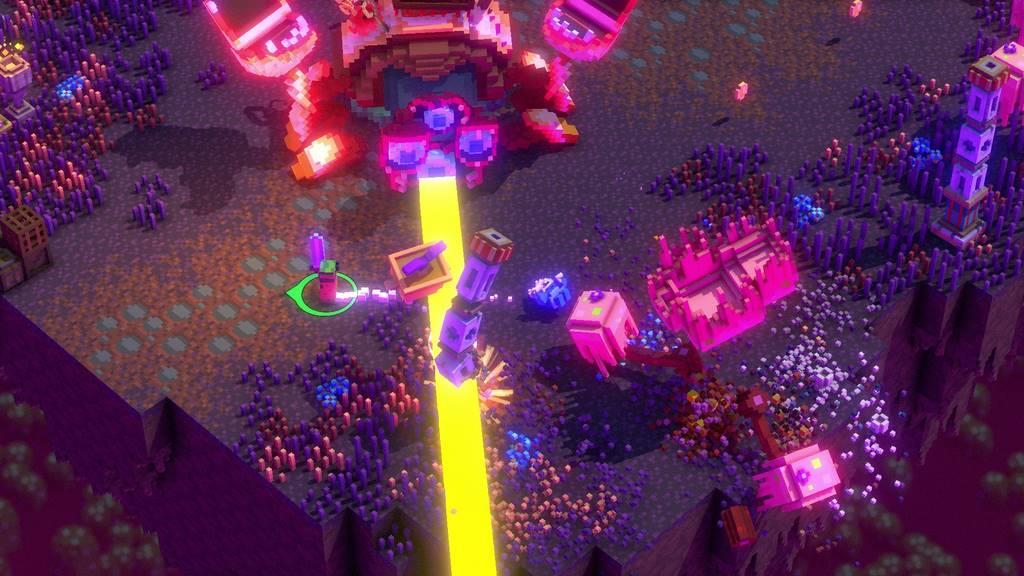 Weapon-types include swords, clubs, spears, dual, and ranged – each with particular combat advantages, which quickly become obvious with use.

Although stats and strengths aren’t stated anywhere, each weapon varies in terms of speed, range, and damage.  For example, club-like weapons will generally do more damage – but are slower to swing, while dual-weapons are much faster and do less damage (usually).  Personally, I found dual-weapons (such as brass knuckles, boxing gloves, and bear claws) to be a ton of fun to use.  They may have limited range and only allow you to target one enemy at a time, but their speed is unreal.  Riverbond’s diverse weapon-assortment allows players to tinker their combat strategy.

Two key points for ranged weapons: ammo is unlimited and aiming can be a little cumbersome (move character with the left stick, aim with the right kind of deal).

Or should I say, Cococucumbersome…

Anyway, spray and pray is a fitting description. 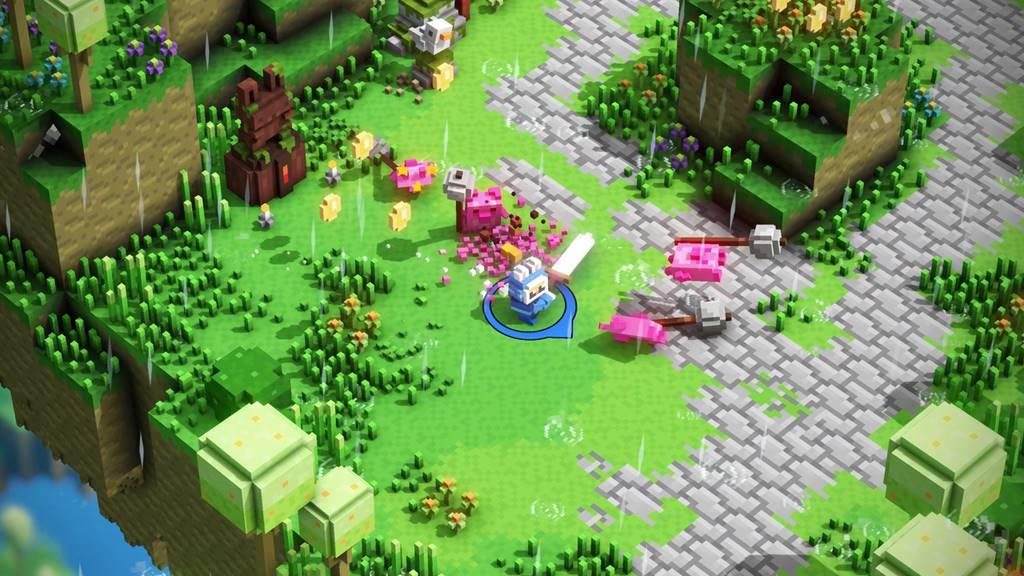 As you progress through each level, combat becomes more challenging – thank goodness.  The game can feel a bit slow in the earlier levels, so it’s refreshing when foes increase in number and strength.  Coupled with tighter combat areas, you’ll find yourself cornered much more often – which inevitably leads to more deaths.

Consequently, Riverbond is good for a few hours of positive entertainment.  Since there isn’t a cohesive campaign or variety of game modes, I’m not too inclined to keep playing.  So one would think there’s opportunity to improve in that department.

You might be asking, “as opposed to what? Negative entertainment?”

That’s an excellent question.  One of the interesting features of Riverbond gameplay is that death doesn’t come with any consequences.  You simply respawn at the last checkpoint.  Eliminated enemies don’t reappear and progress is maintained. 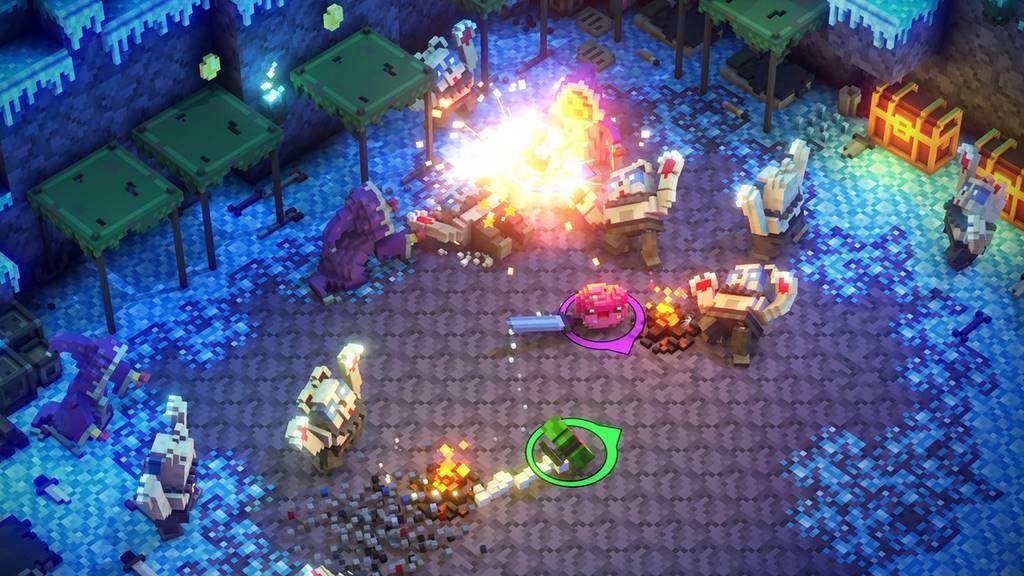 I know this makes the game easier and less frustrating – but not losing your progress when you die feels…off.  In my opinion, this should at least be a toggle in the settings.  The internal gratification from defeating a final boss/level loses a little bit of its luster when there’s no tangible consequence to failing.

On top of that, healing potions become conveniently available when you need them.  Low health?  Whack a couple boxes, kill an enemy or two – healing potions will appear.  Again, I know it sounds weird, but it takes away from the challenge.

I must say, given that the gaming industry is trending away from local co-operative play, I will always appreciate a game that provides this functionality.  Riverbond allows for up to four players on one screen.  Although you’re all on the same team, it becomes a competition to see who can accumulate the most points.  This can be done via kills, collecting coins, finding gems, and even good ole natural destruction.  All strategy goes out the window.  You’ll find yourselves gunning for loot or trying to take kills.  At least, that was my experience.

So despite only offering one game mode (i.e. the campaign), at least Riverbond allows you to take it on with your friends.

Riverbond is a simple game that follows a blueprint.  By mixing up characters, weapons, and environments, Riverbond does a decent job of reiterating this predictable path in such a way that each level is still a unique world – which is necessary to keep the player engaged and entertained.  Overall, gameplay is easygoing and doesn’t require much effort or critical thinking, making Riverbond a solid option to power up and knock out on a slow day.