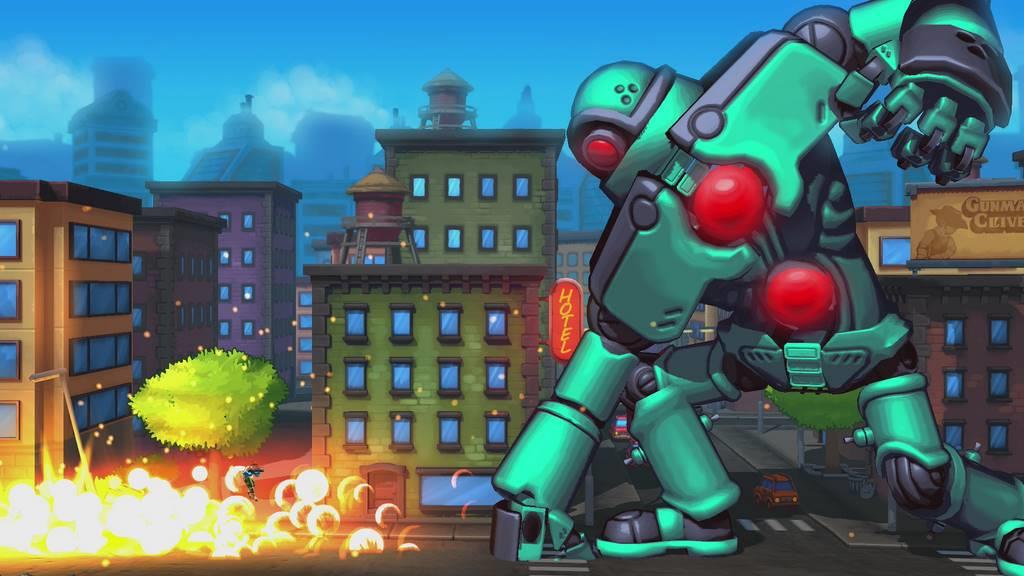 Written by Kinsey Danzis on 5/6/2019 for SWI
More On: Mechstermination Force

Allow me to explain; there is no explanation. There’s a ton of giant robots laying waste to Earth, and you and a crew of other elite soldiers (i.e. the only ones who can still fight, regardless of the fact that none of you are really trained) set out to fight them. Those other losers get knocked out immediately, so it’s just you against the robots. Why are the robots there? Why are they modeled like something a preteen in an engineering or mechatronics club might design just for fun? Why is the vendor in your base named McShopkeep? I don’t know. That’s just the way it is, and we have to accept it and/or move on.

Normally, I would hate this. I play games for the story, and occasionally the satisfying combat. A lack of premise is an immediate turn-off for a review. However, Mechstermination Force’s success hinges on this simplicity. This is no Dragon Age-type game, where you have to take a college-level course just to be able to keep up with the lore and the plot. The plot is that you kill giant, deadly robots. That’s it. You buy the game to kill robots, you play the game to kill robots, and you thrive off of that simple satisfaction of figuring out how to beat said robots.

Or it least, it should be simple.

The premise is simple, I guess. Each robot has a set of attacks, movements, and defenses that remain fairly regular, even though their order is swapped around every time you restart that same boss battle. You figure out how to reach or expose their weaknesses (red spots), and you hit them until they go down (when a yellow spot is finally revealed, you destroy that, and then hooray, you win!). Seems like a moderate, yet entirely doable challenge. The first robot seemed to prove this (although, looking back, I’m not sure if it was easier just because the robot was easier, or if the tutorial made an otherwise hard boss pretty darn simple).

Then I got to the second boss. 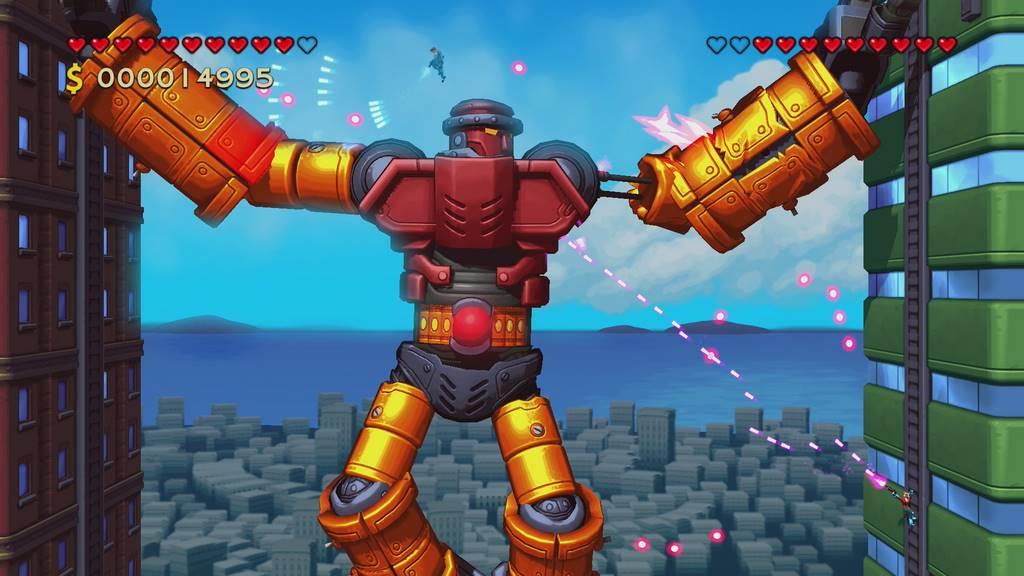 I don’t care if you have broken a bone (I have) or if you have chronic joint pain (I do) or if you have felt the extreme, intense agony of dropping a chocolate chip cookie on the floor (looking forlornly at the crumbs as I type this). You have never felt pain like being stuck on a level of Mechstermination Force, and the second level at that—knowing that it should be easy, knowing that after almost an hour you’ve finally succeeded at breaking all the red spots that you’ve known for ages how to break, but just forgot how to use fine motor skills to actually break, and then getting to what you think is the end and it isn’t the end. You have no idea how to proceed. You can’t see the final yellow spot to deliver the fatal blow. Your hands are sweaty. Your head hurts. Your throat is sore from yelling. You’ve been at this for almost two hours. You knew the solution fairly early on, but actually executing it was so darn hard, and you could have sworn that you’d done it after a laborious gaming session, and then the stupid giant centipede has the absolute gall to keep skittering around trying to kill you. You never would have made it past had you not, in sheer desperation, finally looked up an obscure review that just so happened to hint at the boss’ final weakness in its coverage, and connect the dots from there.

I expected a learning curve. It’s a game composed entirely of bosses; of course there would be a learning curve. You learn by failing and dying over and over again, and then eventually you get it right. But the curve in Mechstermination Force feels, at times, like a sheer cliff face. You can clearly see the handholds leading up the cliff, and you know exactly which path you would theoretically take, but there’s about a twenty-foot high space in the middle where there are no handholds at all, and even though you can see the handholds above it you’re out of luck. It genuinely feels unfair at times—and yeah, I’d imagine that in a brightly-colored robot apocalypse where you’re the only person fit for combat, things would get a little unfair, but there’s a point where it just becomes unplayable. I wouldn’t go so far as to call Mechstermination Force unplayable, because the parts that were playable I genuinely loved. It was just those places in between that almost ruined the game for me, because it made it so arduous to progress. 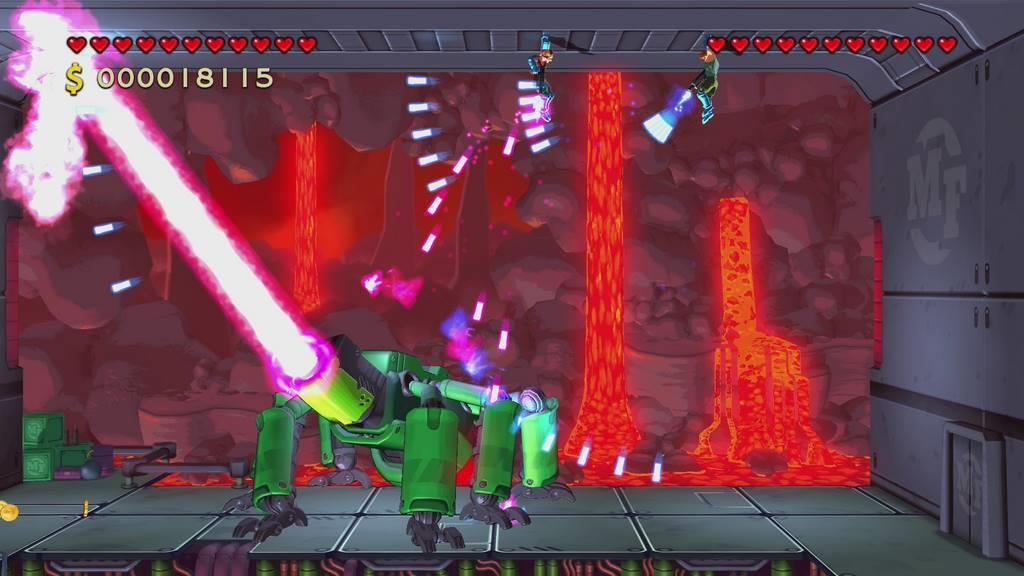 The difficulties I faced during the game were anything from “where the heck is this giant light I know I need to shoot” to “my fingers forgot which button to press because they’re so different from their normal assignments” to “oh my god my character is so tiny I lost her where is she oh no oh no.” The latter is the most prominent one here. The playable character is so small, and the robot opponent so massive (by design), that during certain attacks it becomes very hard to track your character. Don’t get me wrong; I love absolutely, ridiculously massive creatures and creations as much as the next person, which was why I was pretty excited to dig into Mechstermination Force. But it’s a little hard to dodge a wall of fire if you can’t see where you are.

Other than that hiccup, I really love what was done with size here. Normally you want to avoid enemies, because, you know, they’re your enemies, and they have a penchant for trying to kill you. Not in Mechstermination Force. Your tiny size allows (and requires) you to jump and climb all over those giant robots like Tarzan in the Industrial Revolution, getting up close and personal with the massive thing that wants to move your insides to your outside. It’s great. You’re so tiny, taking up maybe 1% of the screen while the robots take up anywhere from 50-90% and you can just climb up the darn thing. It can’t do much about it. There’s an obvious Ant Man/Thanos joke I could make here, but suffice to say that there’s something very satisfying about little ol’ you being able to bring down a mech the size of City Hall. If you can get to that point without tearing your hair out about the aforementioned unplayable bits, that is.

It feels like this game is a true-to-form homage to old school arcade games, frustrations and all. It has the frustration of the grind, the satisfaction of a hard-earned win, and the simple plot of a game you would once have played in the dim, noisy downtown arcade when you had a spare Saturday afternoon. I don’t like simple games, but this game did “simple” well, and I would have loved it if I could beat a single boss in less than two hours (and there aren’t a ton of them in the game). Part of this is due to my own difficulty with the controls, but another undeniable part is due to the steep difficulty curve of the game itself, which I would love to see tweaked in the future so I can make this my de-stressing game. After all, sometimes we just need to shoot some giant robots, no questions asked.

Mechstermination Force feels like it comes very close to having a manageable learning curve. Quality-wise, it’s great, and a good homage to its boss-filled predecessors. However, there’s nothing more game-ruining than, you know, not being able to play the game. There’s hard, and then there’s hard hard, and then there’s Mechstermination Force. It can be done. It can be beaten. I just hope you have a spare hour or two for every boss, and some throat lozenges and ice water nearby.