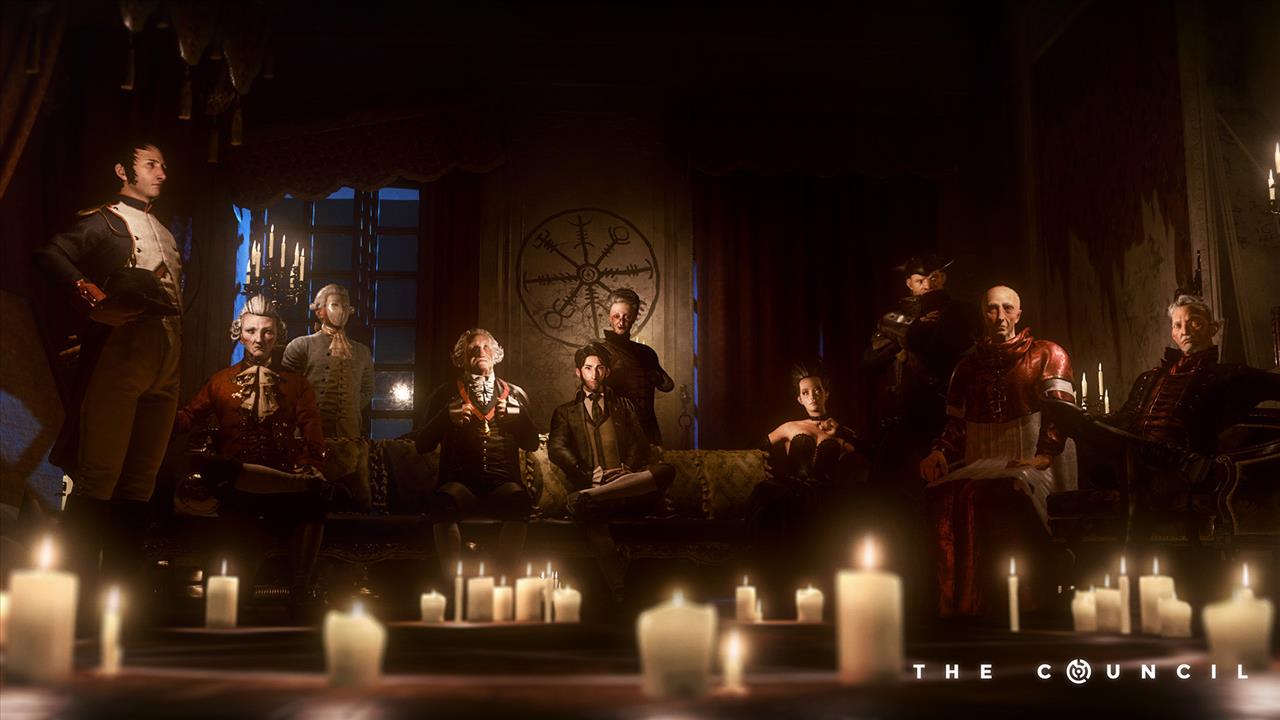 Note: Gaming Nexus did not review episodes 1-3 of The Council. While this review is ostensibly centered on Episode 4: Burning Bridges, I did play the other three episodes for context. This review may be regarded as reflecting my thoughts on all of the first four episodes of the series.

The Council is unlike anything I have ever encountered in gaming.

Let me throw out a couple of topics here to try to weed out the crowd a little. If any of this stuff peaks your interest, then The Council is for you:

“Wait, what was that last one?” you’re possibly thinking. “Demonic possession? Is that supposed to be on the list? “

Well, maybe. Could be. It depends on which cast members of The Council you believe, and who you decide is a nut job dressed in 1700’s clothing. But don’t give your initial impression too much credence. On The Council, no one is what they seem. 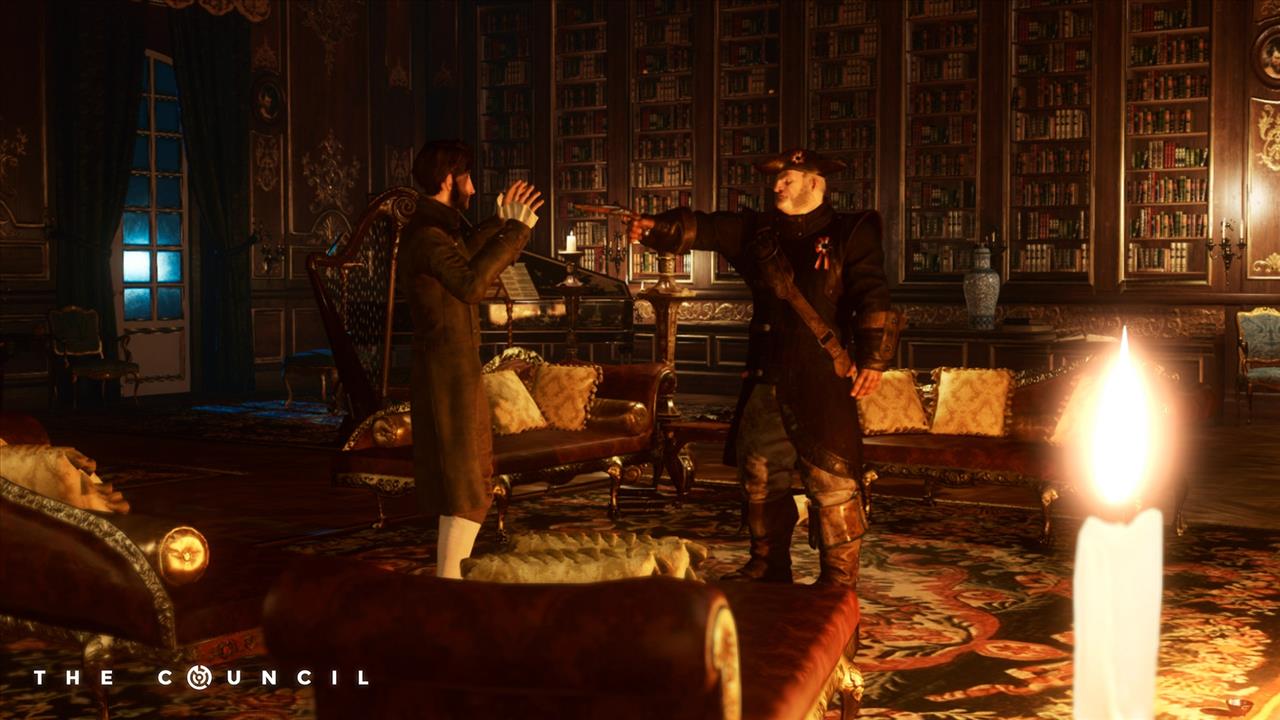 So, what is this game really about? The story is fascinating. On an isolated island in the middle of the night, boats begin arriving, carrying dignitaries from throughout the world. There are presidents, religious figures, generals and royalty. These world leaders travel alone, with no aides or assistants. They have all been to the island before, and they all expect that they will be back again.

The owner of the island, the mysterious Lord Mortimer, gathers these individuals as a sort of brain-trust, an Illuminati-style think tank. Here on the island, they decide the fates of countries, the outcomes of wars, the tides and turns of the world itself. 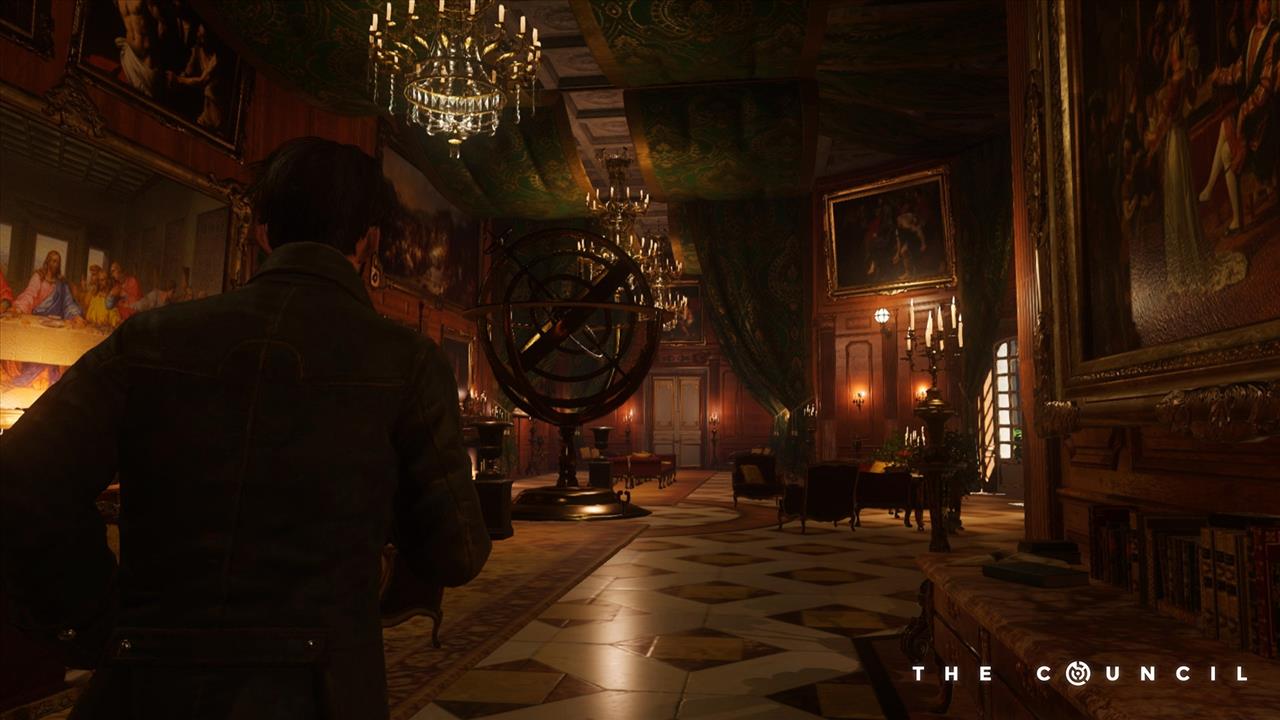 It is into this swirling den of power and intrigue that the player character, Louis De Richet, is thrust. His mother has gone missing on the island during a mysterious mission, and while many of the island’s luminous occupants seem to know her quite well, no one knows where she disappeared to or why. Louis must use every skill at his disposal to maneuver in this den of snakes, ferreting out information in his quest to find his mother and determine what exactly is transpiring on Lord Mortimer’s island.

As his investigation deepens, so does Louis’ involvement with the machinations of Lord Mortimer and his guests. Everyone has their own agenda, it seems, and they all attempt to win over or use Louis to advance their own causes. Louis, however, is more than up to the task. He outwits, outthinks and outlasts the best of them. Louis is a survivor, and those that attempt to harness him to advance their own ends are often surprised when he deftly sidesteps and leaves them looking a fool.

All of the above story setup is made clear towards the beginning of the first episode (out of five), and I will not say anything further about the plot for fear of spoiling this superb experience for new players. Suffice it to say that the narrative veers into unexpected territory, full of anachronistic conversation and Tarantino-style bursts of sudden, shocking violence. For a game that primarily consists of political figures engaged in conversation, The Council is capable of delivering some devilish twists.

I can’t quite put my finger on the elements that make this episodic game so bewitching. I can say that it succeeds despite glaring technical faults, all of which I was completely willing to forgive in order to advance to the next plot point. Mouths are out of sync with the words that are spoken, sometimes failing to move at all. Characters lurch about at times like 1960’s animatronics (indeed, the George Washington character resembles his Walt Disney World Hall of Presidents incarnation more than any real human, with his dead shark eyes and complete lack of facial expression). Plot threads get crossed, and characters sometimes reference events that didn’t happen in your current playthrough. There is no way to skip forward in conversations, with players being forced to listen to every line of recorded dialog. And the load times, which occur every time Louis moves from one room in Mortimer’s sprawling mansion to another, are egregious. On a mechanical level, The Council is a bit of a mess.

And yet, playing through one episode after another, I completely did not care. I found the faults in The Council almost charming, mostly because I was utterly entranced by the audacity it must have taken to attempt to create a game as wild as The Council turns out to be. For every fault in The Council, there is a virtue that far outweighs it, leaving a game that I can fully recommend as worth your time. 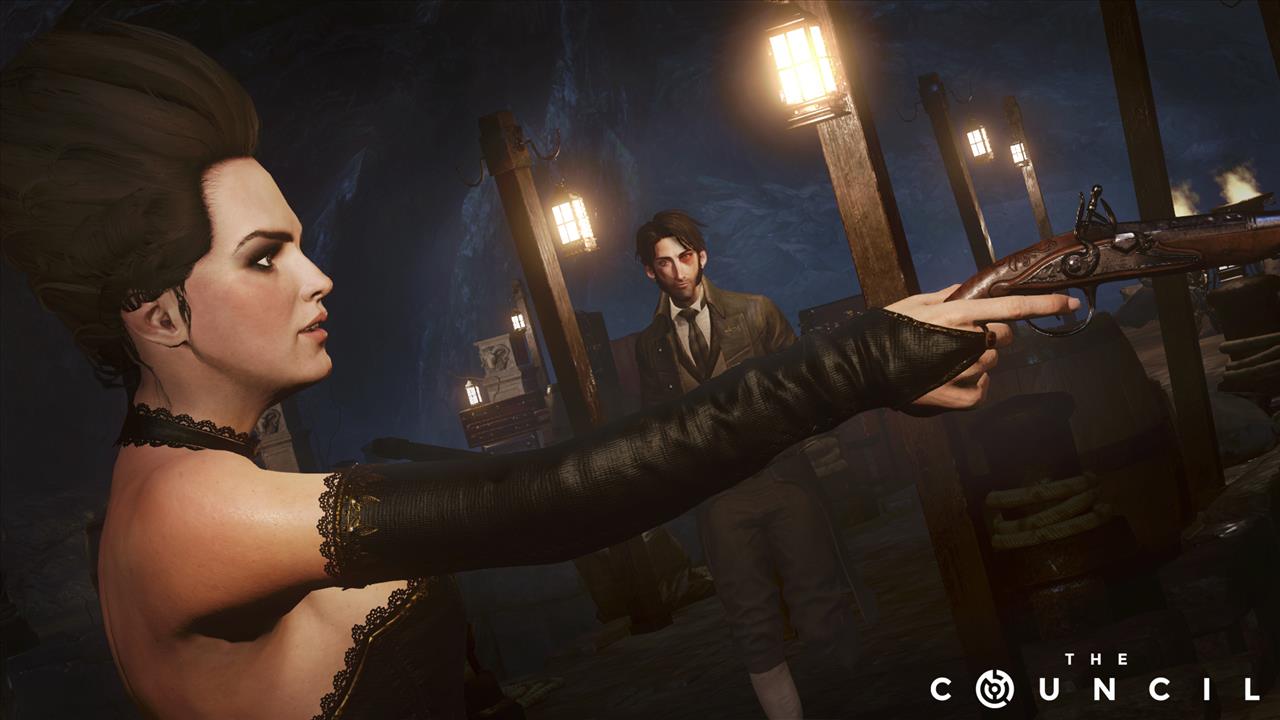 Lord Mortimer’s castle, for example, is a marvel. As the player explores and the story slowly advances, more of the mansion opens up, each room more beautiful and finely detailed than the last. Gigantic works of classical art hang on every wall. Rare antiquities dot every shelf, and as Louis approaches them, he intones a little history lesson for the player, putting each piece in context. Every primary character has their own quarters, and exploring each chamber reveals character depth through the correspondence left laying around. And Lord Mortimer has a wicked sense of humor, decorating each guest’s rooms with artworks that snarkily reference their histories (and their fallacies). With hidden chambers, sliding doors, and Indiana Jones-style puzzles, Lord Mortimer’s hideaway in the sea is a wonder to behold.

Louis’ character is equally labyrinthine. Players start the game by selecting a class for Louis, which gives him a few points in some starting skills. Yes, this is a episodic game with quests, experience points, and a skill tree. Towards the beginning of the game, Louis has a few basic conversational skills, but as episodes advance it is possible to turn him into a force of nature. By picking up skills that allow him to manipulate, intimidate, question, and generally outsmart the other characters, Louis becomes a dominant force in the mansion. 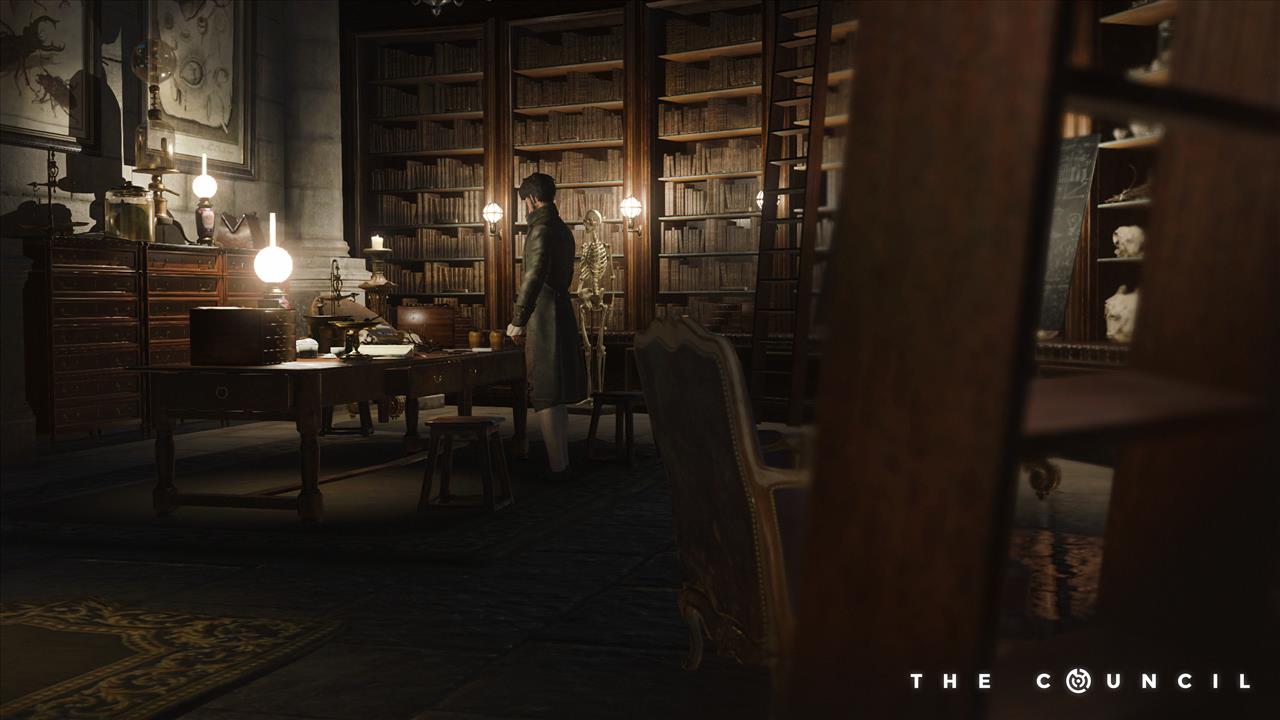 Other skills allow Louis to pick locks, notice fine details, and place historical context on people and situations. These less conversational skills allow Louis to successfully solve each episode’s ruthless puzzles. While some of these puzzles are pushovers, others are so diabolical that even with Louis’ skills at a high level, player’s patience might be put to the test. It is possible at times to simply force a solution to a puzzle through the use of Louis’ skills, but rushing things can have some rather dire consequences. If you value life and limb, it’s advisable to take your time and make sure you are comfortable with your solutions.

Since this review is technically regarding the fourth episode of five, I should probably take a few moments to talk about how this episode fits in with the rest of the series. Story-wise, episode four is a game changer. To say that the game pulls the rug from under the player is an understatement. Many, many of the game’s dangling storylines come to a head in the fourth episode, as mysteries are solved, secrets are revealed, and identities are uncovered. The stage is set for a final showdown in the fifth episode, and frankly, I can’t wait to see what happens. 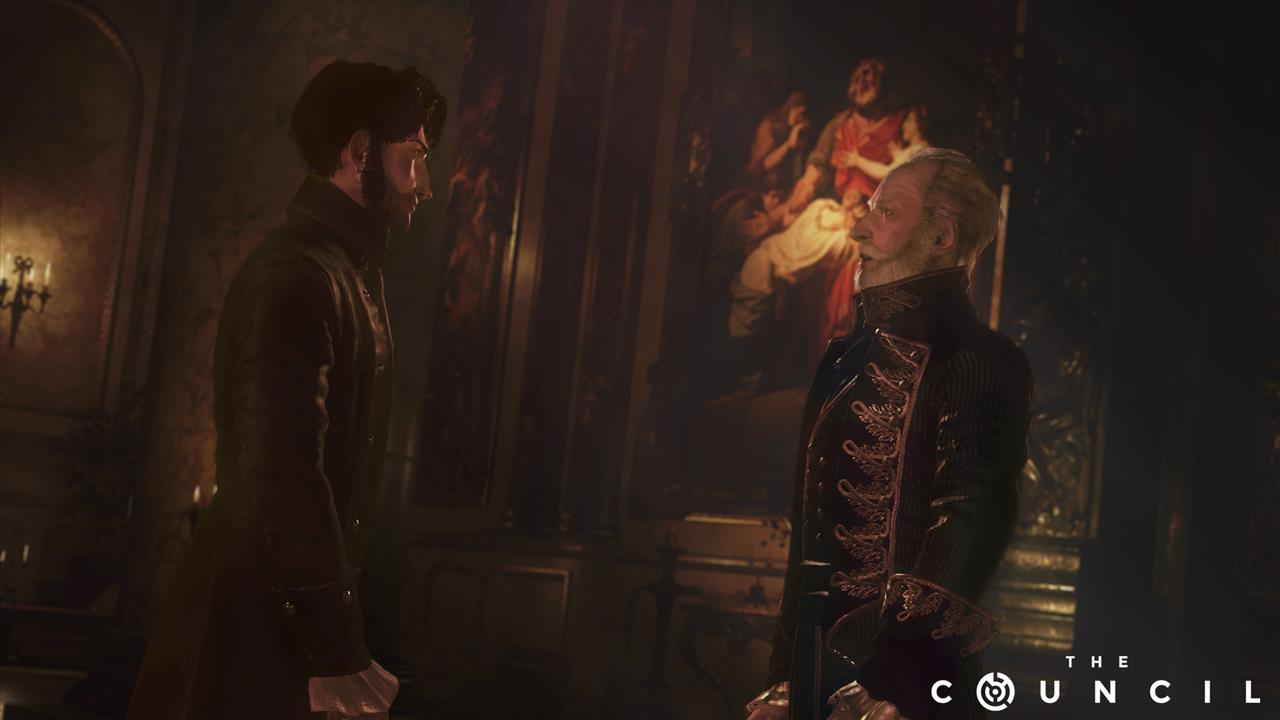 On a technical level, episode four is more of a mixed bag. The development team have been very faithful in shoving the episodes out the door in a timely manner (no Telltale-style delays for this team). But unfortunately, the strain is starting to show. While the plot and story are as great as ever, the game seems to be ripping at the seams a bit more than usual. Stuttering animations, character popup and other issues are far more prevalent than in previous episodes. But as I stated above, I simply don’t care. I don’t mind the sometimes stilted performances, or the narrative inconsistencies, because the world building and story line are so damn fascinating.

I am so glad that I decided to take a look at The Council. While the opening moments had me moaning at the stiff performances, once I got onto the game’s wavelength, The Council quickly became one of my favorite episodic games of all time. This is a game that is taking chances, and with its branching storylines and RPG elements, The Council feels like the first game in a long time to advance the episodic formula in exciting new ways.

The Council is a revelation. While the technical aspects of the game are somewhat questionable at times, the storytelling, world building, and RPG mechanics are simply stunning. I found myself propelled from episode to episode, salivating at the idea of advancing the story and outsmarting the game’s lifelike characters. With twisty surprises, diabolical puzzles, and rich historical context, this is a game that makes the player feel intelligent for playing it. The fact that the story is deliciously twisted is just the icing on the cake.