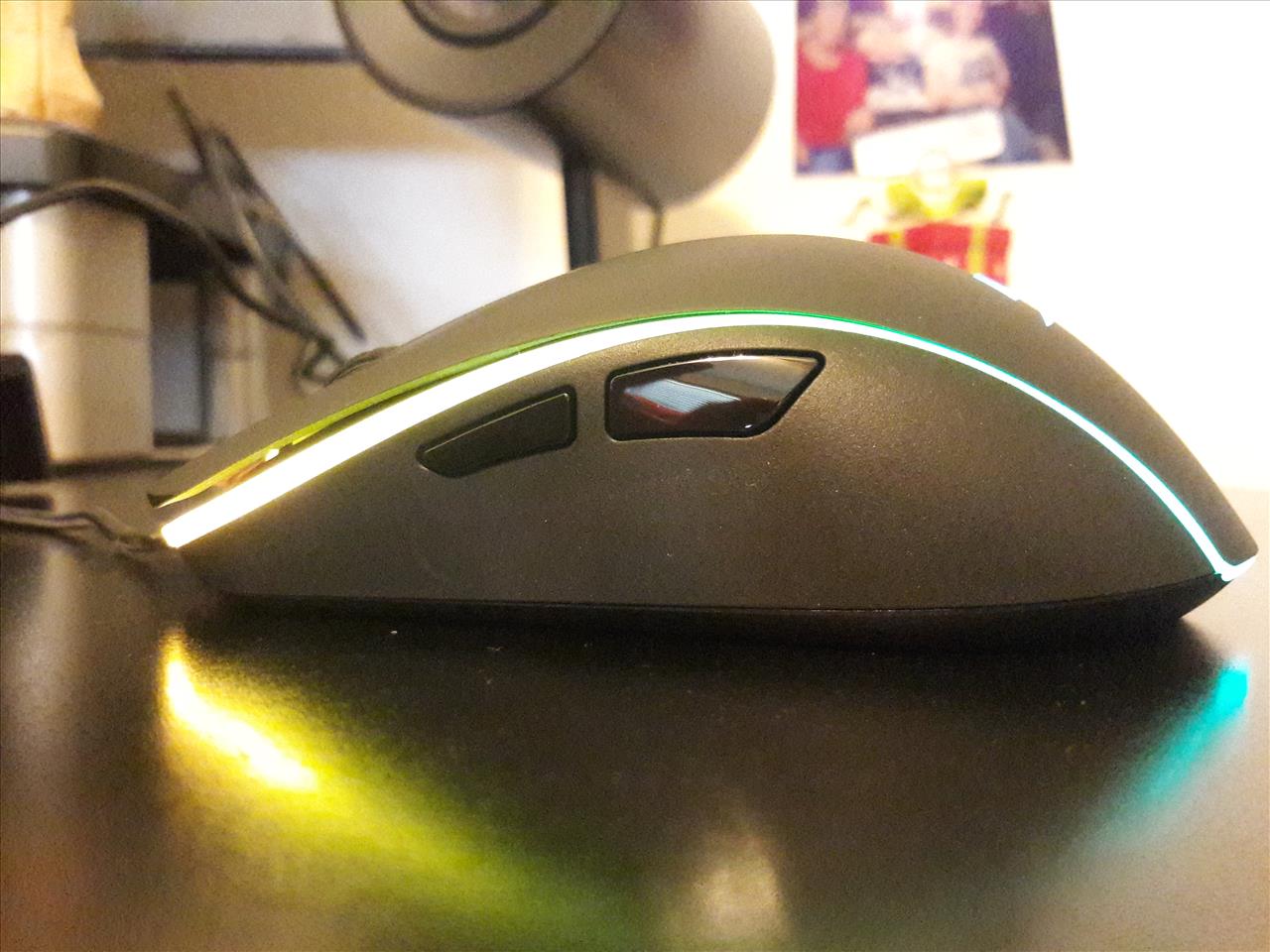 HyperX first released their Pulsefire Surge RGB Gaming Mouse, a mid-range peripheral with its own light and performance-customizing software, back in April. However, immediate customer feedback made clear a prominent design flaw—that the inner edges of the left and right mouse buttons could touch and rub together during aggressive gameplay. At this point, HyperX could have just said “Suck it up, buttercup” and continued shipping, but instead—and this was one of my first impressions of the company as a whole, a very good first impression if I say so myself—they halted production of the mouse until they could release a redesign, which they did in June. It was with this background and impression that the new version of the Pulsefire Surge, along with a Fury S mouse pad, landed in my lap to review, and despite my mild frustration with the products I can honestly say that my first impressions reflected the overall quality of the mouse.

This review is primarily about the mouse, but I’d like to talk a bit about the mouse pad that came with it, just to get that out of the way. We were sent the Fury S Mouse Pad in an XL (about 900mm by 420mm); for reference, a small is 290mm x 240mm, a medium is 360mm x 300mm, and a large is 450mm x 400mm. The quality of the mouse pad is unquestionable; its stitched edges eliminate the fraying problem that I was having with my last (albeit cheap) mouse pad, and its smooth surface really improves the tracking of the mouse, as I saw when I tested it on bare desk for comparison (as well as the aforementioned cheap mouse pad). The design doesn’t really match my personal desk aesthetic, since I tend to gravitate more towards rainbow RGB or blue rippling, but the red wavelike design of the Speed Edition is definitely sleek in its own right; rather than taking up the entire mouse pad, it’s concentrated in the lower right corner along with the logo, which I as a right-handed gamer enjoy. My only real complaint is a personal one; especially given the size of my desk, there is absolutely no way that I can justify having an XL mouse pad. I understand the appeal—more real estate, less restricted movement, more winning, et cetera—but a good 60% of the mouse pad is rendered unusable by my keyboard, speakers, and monitor stand, since I have no other place to put them. I will admit, though, that I do like the symmetry on either side of my keyboard, but nonetheless I recommend saving a little money with a smaller Fury S. On the same note, if you have the money for the XL aesthetic, great; go for it.

The Surge itself, on a similar note, has very few design flaws, the largest of which was already remedied. It’s made of a nice matte plastic that’s neither too slippery nor too chalky against the palm, and the sides are layered with a rubberized grip; never once did my hand slip out of place while gaming with this mouse. The slope of the mouse isn’t pushed too far toward the front or the back, and if you have slightly bigger hands than me (as most people do) then I’m pretty sure that you’ll find it comfortable for both claw-grip and palm gaming. It has a braided cord that’s neither too thin nor too heavy, which I appreciate in a cat household. The skates on the bottom are smooth enough to improve your performance on any surface, but it works particularly well paired with the Fury S mouse pad. 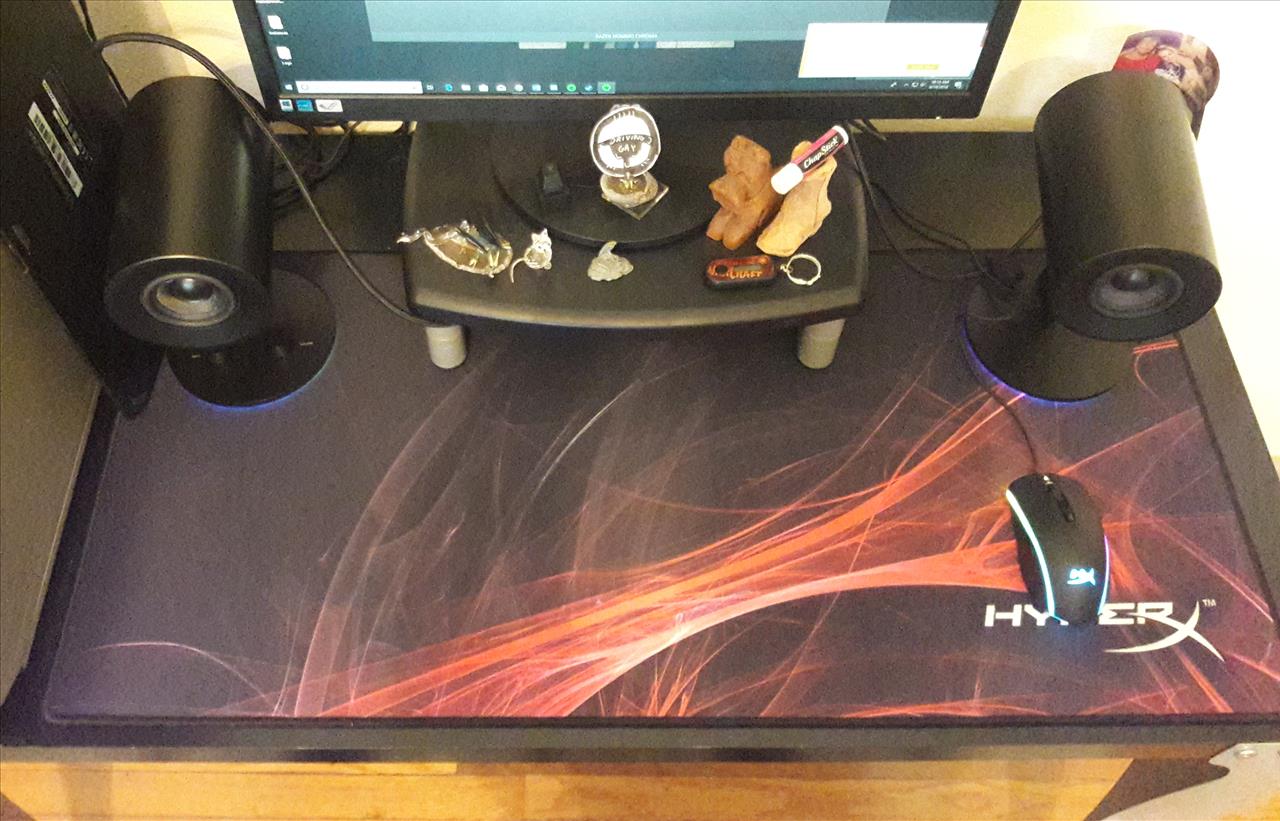 Total, the Surge has six buttons. The left and right buttons and the scroll wheel were really the only ones I used, since I’m not much one for extra buttons, but the two side-mounted buttons were useful for just plain web browsing (front goes forward a page, back goes back a page—nothing outlandish in my house). I’ve heard some people complain about their placement and that they were prone to thumb cramps when using the back button, but I personally didn’t find it to be that much of a problem; I just had to get used to not pressing the button with my fingertip, but rather tilting my finger back so I pressed it with the lower part of my thumb while the fingertip itself was still resting on the front button. Was it a bit of a process to get used to? Sure. Is it because I just have tiny fingers? Probably. But it worked for me, so take that as you will.

The Surge’s sixth button is a DPI toggler by default, and if you like lots of different types of games then I’d recommend keeping it that way (because, of course, all of the Surge’s buttons are customizable). Directly behind the scroll wheel, it’s low enough that I never pressed it by accident, and centered enough that it was always where I needed it. (I imagine that people with larger hands will have an easier time of it, though.)

Of course, then there’s the light show. The Surge has 32 (yes, 32) different zones in its 360 degree lighting display, all customizable. After experimenting a bit with said customization in NGenuity (on which I’ll explain my thoughts later) I figured I’d keep it with the default rainbow wave, mainly because my other peripherals are Razer and this was the easiest way I could get them to match. If you have an eye for customization, though, you have an entire spectrum of colors to choose from, and animations include breathing, cycle, wave, solid, and trigger. There’s some pretty cool combinations that you can manage if you’re finagling around with speed, color, and zones, and I wish you the best with it. I, however, am a simple woman. I see rainbow, I keep rainbow. (Not to mention the fact that the color cycling is smooth, seamless, and beautiful.) 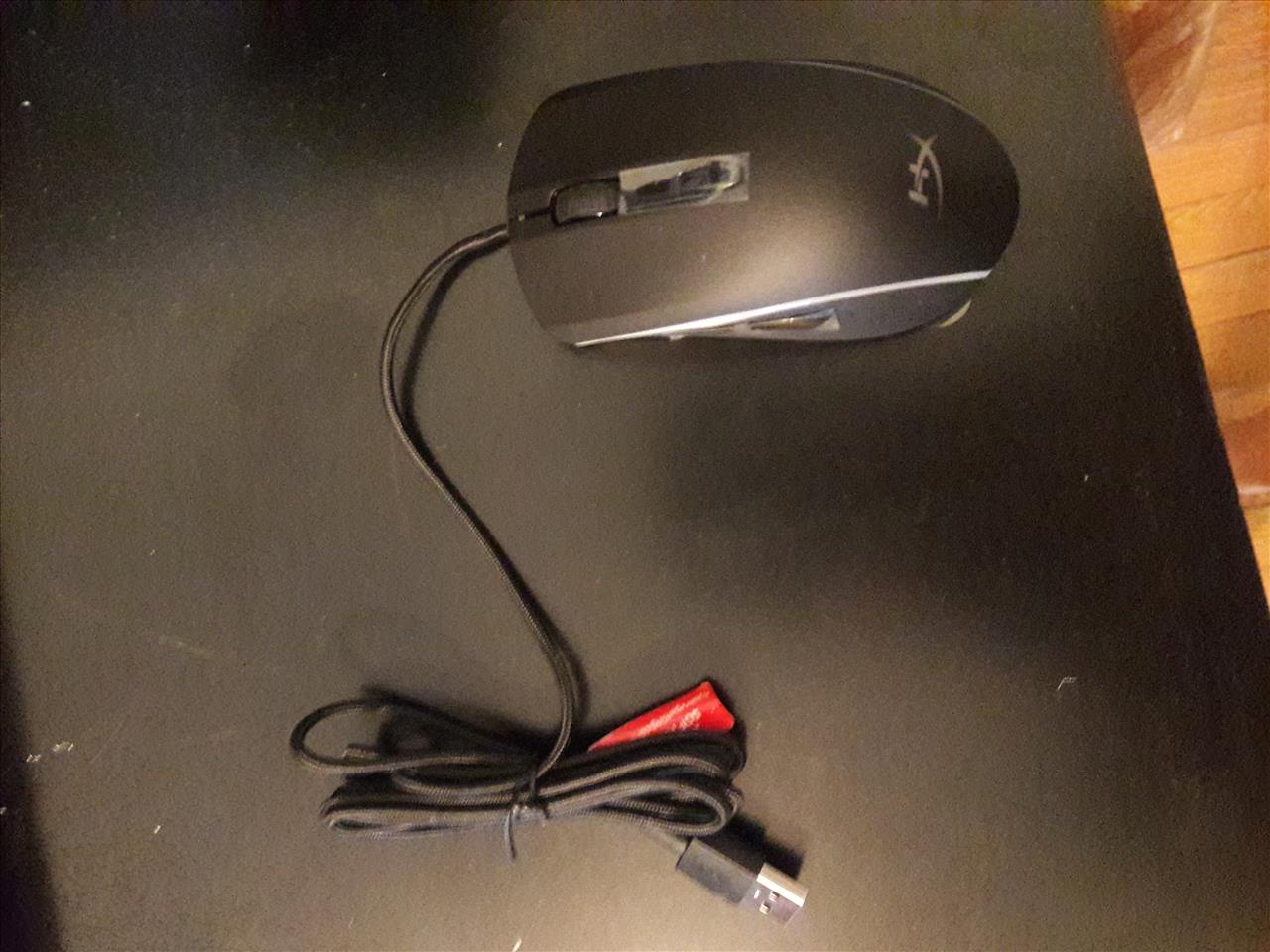 Performance-wise, the thing is great. I have no complaints. It features a Pixart 3389 sensor and fully customizable DPI up to 16,000—not that I ever went that high, because let’s not be ridiculous here. It has Omron switches rated for around 50 million clicks, and oh, what tactile and clicky clicks they are! Plus, with the new fix regarding the left and right buttons, I didn’t have a single problem.

I tested the Surge out with a random mishmash games on my PC (as well as some plain old web browsing, of course) just to see how it did across the board. Due primarily to the customizable DPI, it did pretty darn well. I’m not a huge FPS player on PC (I like the Xbox One controller for shooters) but I did test it out with other first-person games like Portal 2 and SOMA, and even a little World of Warcraft just to see how it would do. Whether I was shooting portals at walls or running away screaming from an underwater robot, there was a DPI perfect for me, and toggling between them was easy as anything, especially since you can have anywhere from one to five sensitivity levels at once. The tracking was almost perfect as well; never once did I die in SOMA because of a faulty mouse. (I died because I’m easily panicked, but that’s another story.) 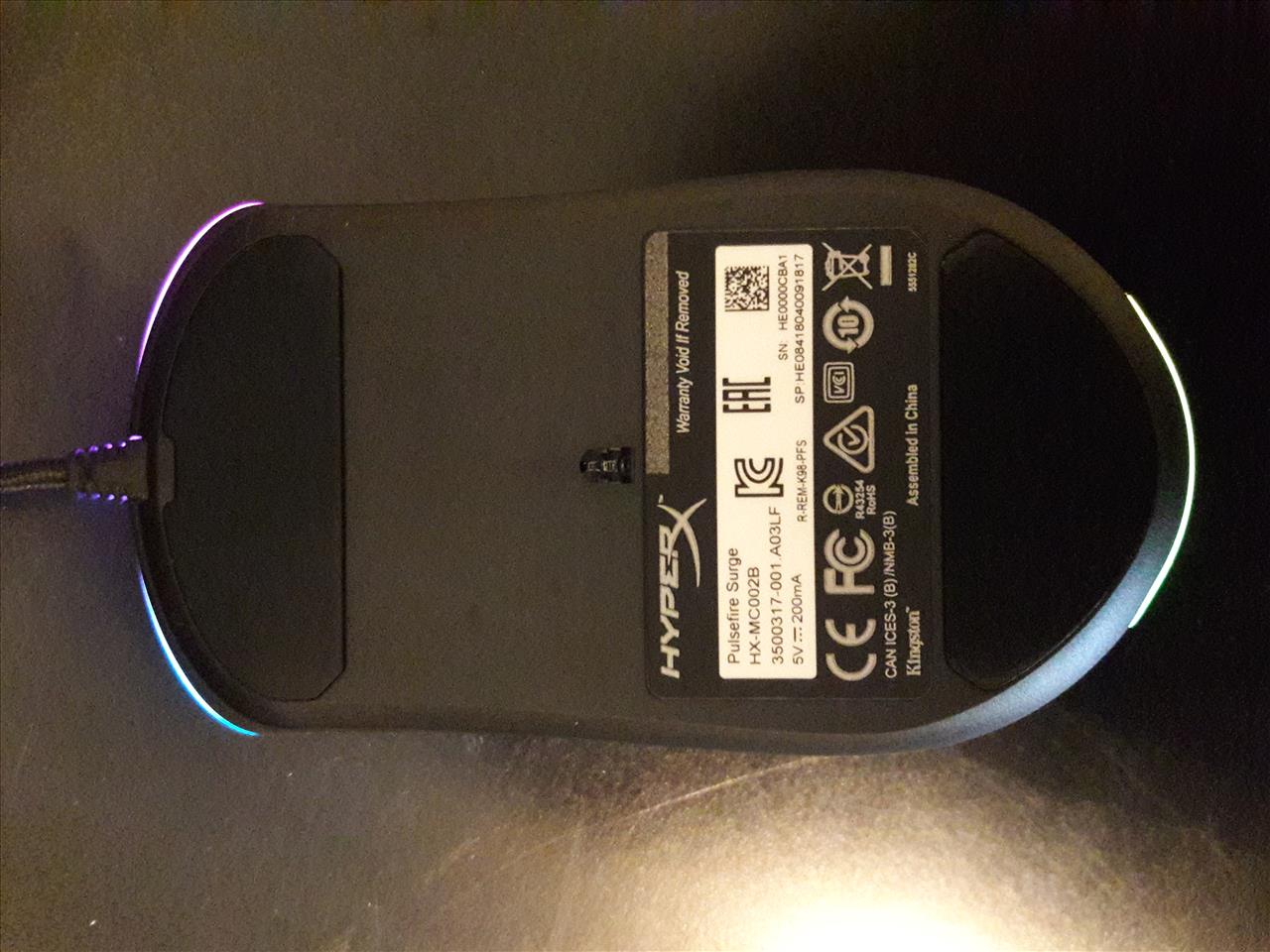 In light of my shining praise of this mouse, I have to say that when I first opened up the NGenuity software for customization, my expectations fell flat. There aren’t many menus or options for you to get lost in, despite the vast number of possibilities for customization, but it’s really not as intuitive as that would lead you to believe. It’s okay. It’s not great, it’s not terrible, it’s just okay. Coming as I did from a background of Razer’s Synapse 3, HyperX’s Ngenuity is pretty difficult to work with since very little of it is explained, and you’re left to kind of figure it out for yourself. (This is a recurring problem I’ve noticed with multiple different companies and their customization software, but HyperX has it bad.) You can get where you need to go eventually, but it’s hard to tell sometimes if the program has actually executed what you told it to execute, and sometimes it’ll just forget the mouse exists altogether. This state of affairs is understandable, since as of right now there are only two peripherals that can make use of the software and it hasn’t existed for a relatively long time, but if nothing else then there’s plenty of room for expansion and improvement. It’s just not there yet.

Even after all that, the Pulsefire Surge is worth it. At a $69.99 USD price tag, I’d hoped for some more intuitive performance and light customization, but I expect that HyperX will improve that with time. Its design didn’t make any great forays into the unknown, but rather stuck more with what already worked and made some small improvements on that. Regardless, HyperX ended up with a great-looking mouse that performs with the best of them.

HyperX’s Pulsefire Surge RGB Gaming Mouse is a well-performing mid-range mouse that works for a wide variety of games. It’s bogged down a bit by the NGenuity software, but the pros far outweigh the cons. Ultimately, its sleek, functional design and vibrant lighting make it a great addition to your desktop.