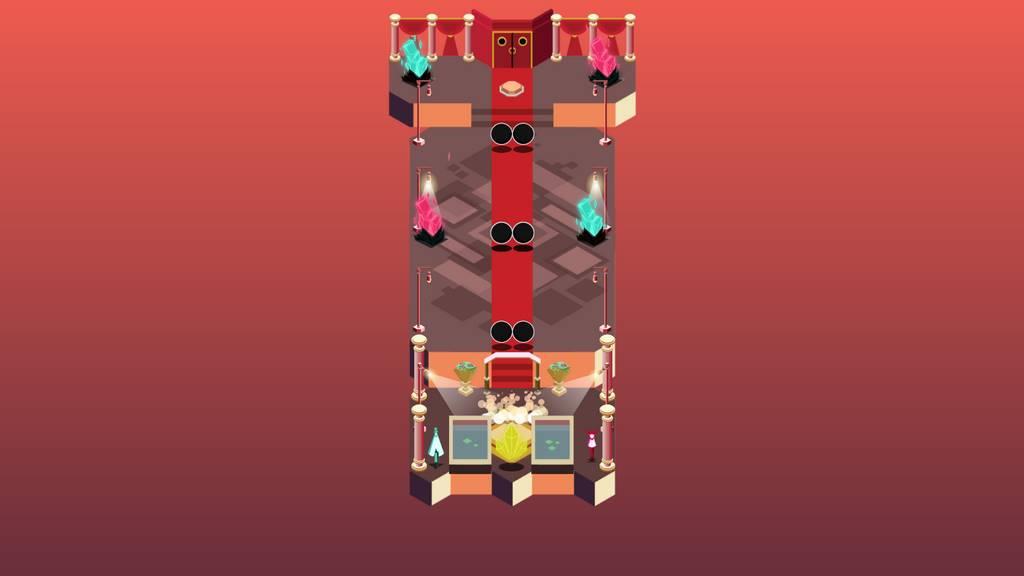 Umiro presented a conflict for me right from the get-go, before I even activated my Steam code. I enjoy games with similar aesthetics and somehow-otherworldly worlds, but I’ve rarely had good experiences with mobile games that claim to bring a cohesive story to the table. (This could mean anything from developers trying to cram way too much narrative into the equivalent of a teaspoon, to the introduction of a few plot scraps with a complete lack of commitment). The compressed nature of mobile games (which Umiro is, though I played it on PC myself) doesn’t really lend itself to in-depth lore. I’m pleased to say, however, that Umiro did the best that it could with its story given the genre, while the gameplay fits the genre perfectly—and of course, the visuals were never in question.

Story-wise, you wake up as a boy named Huey in a strange world, with no clue where you are of no memory of how you got there. You discover fairly quickly that you can only regain your memories by way of touching strange crystals in each level—which, to his credit, Huey does very quickly in comparison to Satura, who he meets up with later on. By this point, he remembers more or less what happened, while Satura—his friend, and probably more—remembers next to nothing, and for some reason he’s a bit evasive on certain details (not maliciously so, it seems, but still).

So all in all, a pretty straightforward story. Classic amnesia, possible relationship, discover-details-as-you-go storyline. There’s not much depth—and where there is, it seems to leave some loose ends. (All the same, I’ll try to avoid spoilers with annoyingly vague language.) Midway through, we discover that an event on some level of disaster (probably mid to high) occurred that resulted in Huey and Satura being transported to this strange world. Somewhere along the way, Satura gets it in her head that this is her fault. Huey insists that she’s being too hard on herself, as friends/significant others are wont to do, but there seems to be something more to what he’s saying, and his refusal to elaborate. Later on, in a series of levels that you can access after completing each main chapter, we discover that the origin of the disaster was not what it seemed—but do we discover what actually caused it? Nope. Not really. Some more follow-through could have really helped flesh out the story, because it has a great foundation as-is and I feel like its ending didn’t do it justice. 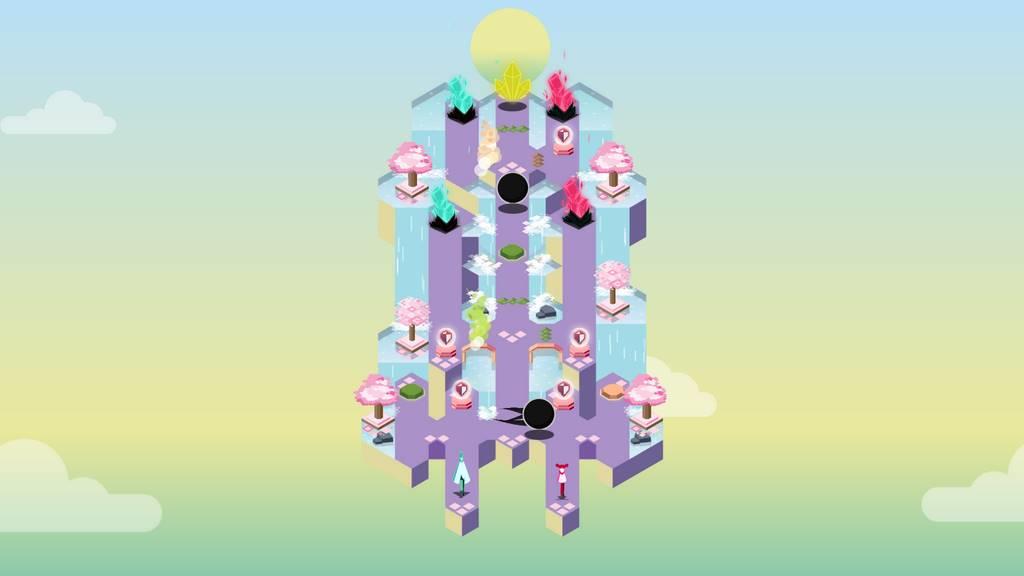 But at the end of the day, this is a mobile game, and to expect the level of story that only a 60+ hour game can provide is unfair. For what it’s able to offer given its primary platform (mobile, though it is also PC-capable) Umiro’s story has enough momentum to keep the game going. The story, in essence, is secondary, because what really makes a puzzle game tick are—wait for it—the puzzles.

The game itself is divided into multiple chapters, each with multiple unique levels that you must guide Huey (and Satura) through. With your finger (if you’re on mobile) or your mouse/arrow keys (if you’re on PC) you have to draw a path for each character, guiding them to their respective colored crystal whilst avoiding obstacles and enemies (though the only enemies in Umiro are ominously silent black orbs). It starts out easily enough in the first chapter, when you haven’t yet found Satura and your only job is to make sure Huey gets to his crystals. When Satura comes into the picture, however, your job gets a bit harder. While at first, you only have to draw to separate paths, eventually you have to coordinate their timing. For example, perhaps Huey’s crystal is blocked by a barrier, and Satura is the one that must press it—but be careful, because Huey might have to step on a button on his way, which could block Satura from her own objective. Since the two characters run concurrently, it’s a game of timing in which trial and error is a primary mechanic.

And let me tell you—you’ll get a lot of error. A lot. 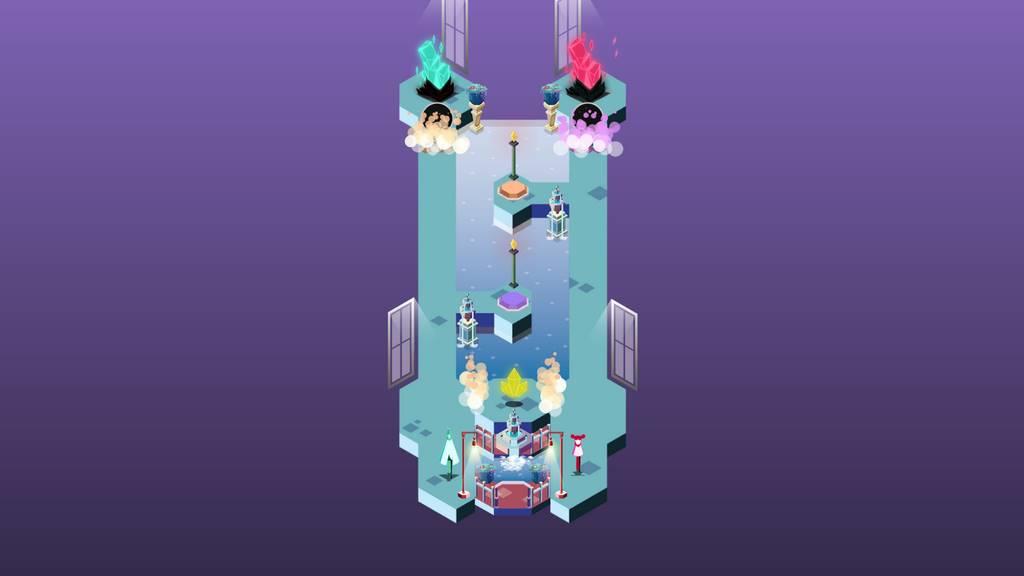 What I found most surprising about this game, though, is that I wasn’t bored to death by the repetition of constantly failing and resetting. I attribute this to the structure of the levels themselves. You draw your path for each character, and then when you’re satisfied you tell them when to go. If they die en route, you start over with very little reset time, which is always a plus. In levels with multiple crystals, it’s slightly different, but in a good way. If both Huey and Satura need to visit two crystals to beat the level, you’re not allowed to draw a path that crosses all crystals. It’s not allowed. The game won’t give it to you. Instead, you have to safely get Huey and Satura to the first of each of their crystals, ending the path there, at which point the game will give you an opportunity to draw a second path. The great thing is that, when you inevitably die trying to get to the second set of crystals, you aren’t shoved back to the beginning; the crystals act as checkpoints, so you’re not stuck repeating the same mind-numbing path as before. 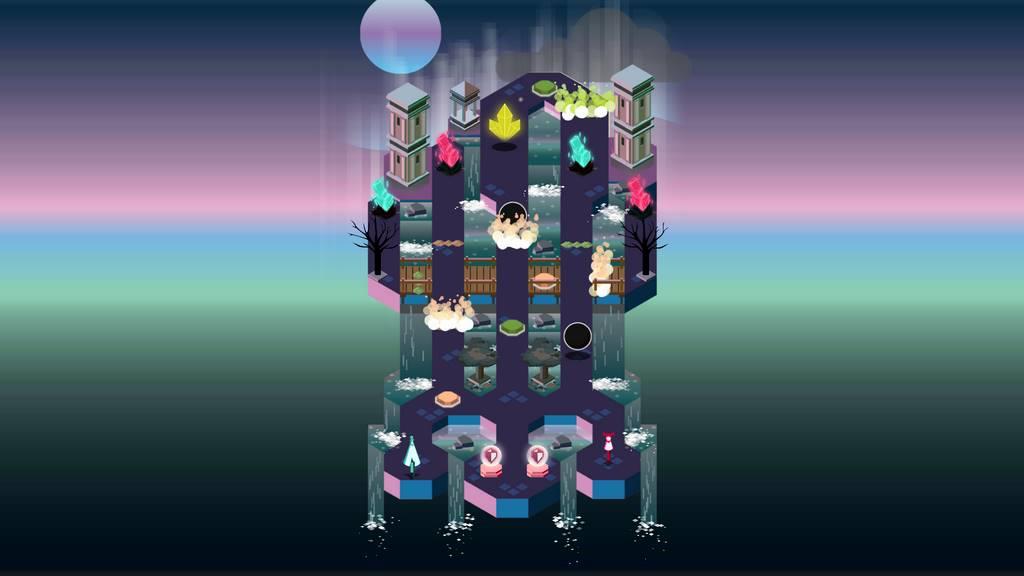 The levels themselves are a pleasure, and even as I found myself getting frustrated at my failures at the hands of my useless mouse (which currently is a cheap wireless Logitech, so honestly what else could I expect?) I couldn’t deny that I was decidedly relaxed. As you play, the colors emanate outwards from Huey and Satura, filling the monochrome world around you. Each level, though not always introducing new mechanics, ramps up the difficulty at a decent pace. This could just be my bias speaking, but any flaws with the gameplay itself (not that any huge ones are readily apparent) are overshadowed by its general aesthetic—the geometry, the color, the minimalism, the overall look of it all. For its intended purpose, it just works.

These aspects combined—its modest story, its level design, and its quick-reset mechanics—are its great claims to success for mobile platforms specifically. When you’re waiting in line for something, or just hanging around with nothing to do for a hot minute, you’re not going to bust out an entire Xbox and start playing Tomb Raider. No, you’re going to pull out your phone and open up a game that’ll engage you for as long as you need it to, but will also allow you to put it down or resume at a moment’s notice. You’re going to open up a game that doesn’t take more emotional commitment than you have the time to give, but also isn’t so shallow that you can’t muster the will to care about it. You’re going to open up a game that keeps your brain busy with unique levels and mechanics, but doesn’t skimp on the design and aesthetics in the background. That’s Umiro.

If you’re looking for a mobile puzzle game worthy of your time, then Umiro is where you should turn. It’s short, with admittedly low replay value, but hey—it’s a mobile game, primarily. It’s not the place to look for a fully-fledged, complex plot, but it does the job on the puzzle front, and is great at keeping you engaged for however long you have to play it.