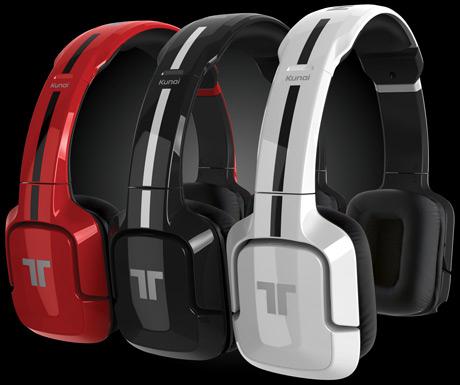 Written by Jeremy Duff on 11/12/2012 for 3DS   PS3   Vita   WiiU
More On: Tritton Kunai
A couple of months ago, my wife began questioning why I needed so many headsets around the house. I had one for my PS3, another for the 360, a third for my laptop (plus one for the desktop), a loose pair for portable devices, and other miscellaneous ear buds scattered throughout the house. She didn’t understand why I couldn’t use one pair with everything. Sure, I could have done that but I just didn’t want to be tasked with constantly hooking / unhooking a headset to transition between devices. While I still don’t have an ultimate answer to the situation (or her question for that matter), I have managed to find a solution that makes things easy with my Sony systems: Tritton’s PlayStation Kunai.

The latest wave of headsets Tritton is producing in its Kunai line is especially tailored for the PlayStation family of products. This single headset is intended to satisfy your audio needs on both the PlayStation 3 and the PlayStation Vita, including voice chat. The duality of the stationary versus portable design of the headset is a blessing for those who want to simplify their options in situations like I described above. It turns out however that this dual-personality also proves to be the headset’s biggest drawback.

First off, let’s talk about the facts of the device in terms of its design and the components.You have a choice between three colors with the Kunai: red, black and white. All three feature the same mechanical-styled design, coated with a hard plastic shell to ensure durability; it looks like a small piece of armor (in a cool way). Despite the hard exterior, the underbelly features a soft-padded, adjustable headrail which can be extended more than an inch on each side. Each of the earcups also swivel in both directions so that you can adjust them for a perfect fit to your head.

Although the cups are designed to rest on your ears, they are layered with thick padding that eases the pressure placed on your ears; they conform to the shape, making them uber-comfortable. There is a very flexible-yet durable microphone included with the headset, which can be attached and removed at will. The mic uses a simple and effective locking mechanism to quickly secure it in place when attaching it to the left earcup. Nearly the entire length of the mic is flexible, making it very easy to adjust it on the fly.

The Kunai isn’t wireless, so you will be tethered to your system of choice. On the PS3, it utilizes the standard console set up that piggy-backs onto your audio connection to the television. The connector acts as a pass through for the yellow / red audio connection of your video cable(s) and runs to a small volume / mic control box that will allow you to adjust the levels of the headphone independently. This pass-through design isn’t an issue if you are using a component or RCA connection, but things are complicated if you are utilizing a HDMI connection. If you set up has that connection in use, you will need to go into the settings of your PS3 and separate the video and audio feeds. Tritton knows this is an issue and has specific instructions included in the setup guide to walk you through the process. There is also a USB connection that plugs into your system in order to power and feed the signal to the microphone. 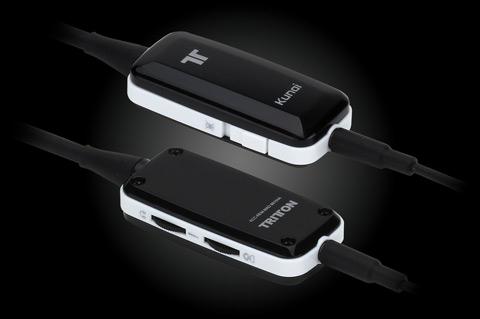 On the Vita however, all that you have to deal with is a simple 3.5mm connection that connects to your combined audio / microphone port on the bottom of the system. What makes it so easy to switch between the two systems is the break-away design that Tritton has employed. It is the control box that connects to your television and PS3 and the Kunai plugs into that box when in use. You simply unplug it from the box and your are ready to plug right into the Vita. The cord hanging from the actual headset is much shorter than typical audio wires. This shortened length  proves to be a great benefit to the experience. When portable, you aren’t left with a bunch of excess cord to get your hands and system tangled in while you are moving about. When stationary, there is a ton of length between the television connection and the control box, which allows the controls to remain close to you when connected to your setup.

In terms of comfort, it doesn’t get much better than the Kunai experience. As I described above, the headset really conforms to the size of your head, regardless of size. It is a very flexible design and one that feels very natural and un-intrusive. As comfortable as it may be, I do have an issue with the overall size in terms of using it on the Vita; as a portable solution, it is really a bit large. There isn’t a good means of storing them when on the road aside from draping them around my neck; you can forget about stashing them in any sort of carrying case you may have for your handheld as you can do with smaller sets. It is hard to argue with the performance however, and if I have to adjust to carrying them on my neck in order to get the solid, stereo performance they provide, I guess I can learn to live with that.

Since we’re talking about storage, I was also a bit disappointed that there isn’t a simple means of storing the microphone on the headset when it isn’t in use. While I can appreciate the ability to remove it with ease, what exactly am I supposed to do with it when I am on the road? It would have been nice to have the option to fold it into the headset or perhaps slip it into a compartment on the hardened exterior for safe keeping. This also works against the portability of the headset in terms of being an inconvenience. 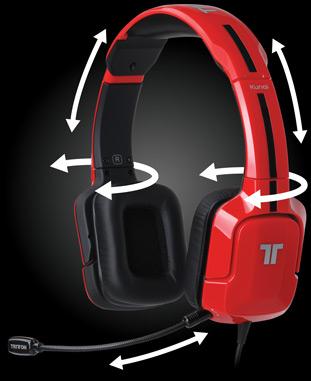 On the other side of the coin, being a stereo headset, it pains me to know that there are other, better audio-quality options for my home console. With other options out there including very affordable 5.1 solutions, it feels as though I am limiting myself with the Kunai. In this situation, the thing that the Kunai has working for it is the ease of connection offered by the breakaway setup. It is just so easy to connect this pair after the initial setup and to configure the USB-powered microphone. The sound quality and performance of this set, both in terms of the audio signal and the voice chat, is excellent for a stereo headset. I just know that my consoles are capable of more on the audible level.

Despite it being clear that there are better portable options available for the Vita and better quality options for the PS3, comes the issue of the device’s simplicity. It is this simple yet oh-so-important aspect of the Kunai that has made it my go-to headset of choice. The transition between uses and the setup up for both (or lack thereof on the Vita) makes it my goto option for playing PlayStation games of any sort in my household. I love that I don’t have to fight with Bluetooth pairing to make the chat work and that the audio and voice levels are so easily changed.

This simplicity is the Kunai’s greatest asset. You won’t necessarily want to buy one if you have just one Sony machine; however, if you have both a PS3 and a Vita, it really becomes a no-brainer. The Kunai is the best, if not the only, total-audio solution for the PlayStation family of products.It also helps that the 3.5mm connection also works on other small audio devices such as iPods and Android devices, just don’t expect the mic to be supported (it is a combined connection on the Vita).
The Kunai is a solid piece of hardware with an identity crisis. Is it meant to be portable or is it intended for stationary use? There are better options available in each of those categories individually, but very few that satisfy the demands of both as the Kunai does. It is a great solution for those looking to consolidate their audio accessories, at least when it comes to Sony’s gaming products.